Another Parton-Connected Project In Trouble

Dare County real estate developer Ray Hollowell was counting on Dolly Parton and her family to help him transform the Pine Mountain development, located in southern Burke County, into a more upscale community that he renamed “The South Mountain Preserve.” Hollowell also was counting on Gov. Bev Perdue to help promote the project, and N.C. State University to help establish vineyards and a winery on the property.

Not long before, officials in Roanoke Rapids had counted on Dolly’s brother Randy and the Randy Parton Theatre to anchor a music district that would transform the economy of the region. Soon after the theater opened, however, it became a different kind of anchor, saddling the town with millions in debt and an underused performance facility. The project drew extensive coverage from news outlets across the state, led by reporting in Carolina Journal.

But the saga of Pine Mountain — featuring hundreds of thousands of dollars in unpaid taxes, delinquent homeowners assessments, and overdue loans — has attracted little public attention and no news stories to date. And Hollowell, along with homeowners in the development and officials in Burke County, hope that Pine Mountain doesn’t suffer a fate similar to that of the Randy Parton Theatre.

Hollowell began purchasing vacant lots at Pine Mountain in 2005, using 14 different entities to acquire more than 900 individual parcels. His activities were concurrent with the development of the Randy Parton Theatre, the groundbreaking for which was in November 2005. The building was completed in March 2007.

Hollowell’s plans for Pine Mountain have stalled, and public records indicate he is experiencing financial difficulties. He has been unwilling or unable to pay assessments to the property owners association. He has lost some lots in foreclosure proceedings and has other loans that are past due. His various companies owe almost $200,000 in back property taxes to Burke County.

Hollowell met with CJ May 27 in Raleigh and said the Partons no longer are involved. “We had a list of things they were going to do, but the economy killed the resort development business,” he said.

“I have millions invested in the project. I can’t walk away. I believe that it is a good project and hope to secure the financial resources to see it through. It is the best project that I have seen in over 30 years of resort development. I have been appreciative of the property owners association board and the county with their patience and understanding,” he said.

“People need to understand what it has been like in the last eight years of the development world,” he added. 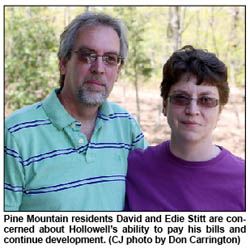 Pine Mountain residents David and Edie Stitt, along with other neighbors who met with CJ, believe Hollowell either should pay his bills or sell his interests in Pine Mountain, where the Stitts have lived since 1995. Edie Stitt is the current secretary to the board of directors of the Pine Mountain Property Owners Association. She told CJ that Hollowell still has several supporters in the community. “His supporters refer to him as a developer, but he has not developed anything here. So far, he has just been a land speculator that doesn’t pay his bills,” she said.

She said Hollowell currently owes Pine Mountain Property Owners Association $378,000 in back assessments and a note for $155,000 plus interest.

Originally named Pine Mountain Lakes, the development is located 20 miles south of Morganton and adjoins South Mountain State Park. It was started in 1973 and contains 2,600 acres, 27 miles of roads, more than 1,000 individual lots, and a significant amount of open space. In the early years, television and radio personality Art Linkletter promoted the development on his programs, and a 5,500-square-foot home built in 1973 for him is still referred to as the Linkletter home.

Most of the lots are approximately one-half acre. The planned lakes proved to be unfeasible, and the name was shortened to Pine Mountain. An 84-room hotel and restaurant on the property are closed and for sale. Today, there are approximately 70 homes and 30 townhomes in the development, which is managed by the Pine Mountain Property Owners Association. The association also operates a public golf course that appears to be in good condition.

A document obtained by CJ titled “The South Mountain Preserve Strategic Marketing Plan” outlined Hollowell’s plans. The document included a photograph of Dolly Parton, her brother Randy, and other members of their family posing with Hollowell. (See related story.)

According to the marketing plan, Hollowell’s partner in the South Mountain Preserve project is Rick Watson. Watson, who now lives in Garner, was the former CEO of the Northeast Commission, a state-funded economic development organization based in Edenton, serving northeastern North Carolina.

Hollowell told CJ that Watson is no longer involved in the project, even though he owns several lots in Pine Mountain under the name of Spring Brook LLC.

Watson was instrumental in bringing the Randy Parton Theatre to North Carolina. He traveled with Randy Parton throughout northeastern North Carolina in 2004 and early 2005 looking for a community to host and finance a theater project. They settled on Roanoke Rapids. Dolly Parton attended a groundbreaking ceremony in November 2005. Watson’s Northeast Commission board of directors forced him to step down in 2006 when they learned he had acquired an ownership interest in Parton’s company, “Moonlight Bandit Productions.”

Hollowell was a board member of the Northeast Commission when he signed a “binding letter of intent to serve as the key development partner” with Parton in “bringing high-quality musical entertainment and affiliated mixed-use entertainment district developments to northeastern North Carolina.” The agreement stipulated that Hollowell pay $50,000 to a company controlled by Parton upon signing the document.

Roanoke Rapids borrowed $21 million to build the project. The 1,500-seat theater was completed in March 2007 and was turned over to Parton to manage. Parton’s first show with his band took place July 26, to a sold-out crowd, but attendance eventually declined to audiences of 100 or less.

City officials became concerned that under Parton’s management the theater would not generate enough revenue to repay the $21.5 million debt. The city scrapped the original contract with Parton in November 2007 and removed him as the theater’s manager.

The situation quickly deteriorated. In December 2007, then-Mayor Drewry Beale asked Parton, who appeared to be intoxicated, to leave the theater just before his show was to begin. He exited the back of the building and never performed there again. City officials quickly renamed the facility The Roanoke Rapids Theatre. It since has been renamed the Royal Palace Theatre, where HSV Entertainment operates 1,500 Internet sweepstakes machines and occasionally hosts country music performances.

Hollowell told CJ he was committed to Pine Mountain prior to the demise of the theater. He asked the Partons to join in on the project.

When Dolly Parton performed in 2008 at what is now the PNC Arena in Raleigh, Hollowell organized a private meeting and photo session with her for a group of potential lot buyers. He said Parton even mentioned the South Mountain Preserve project between songs. “We invited 160 people and had 120 show up,” he said. “That was the last event we had with the Partons.” 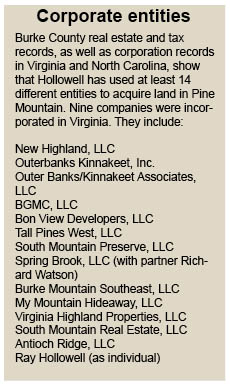 Burke County real estate and tax records, as well as corporation records in Virginia and North Carolina, show that Hollowell has used at least 14 different entities to acquire land in Pine Mountain. Nine companies were incorporated in Virginia (see chart). Hollowell told CJ that he used different companies so people wouldn’t know that he was trying to acquire all the vacant lots.

Hollowell has shifted property between the companies. For example, on March 4, 2013, Hollowell incorporated Burke Mountain Southeast, LLC in Virginia. Two days later, South Mountain Real Estate transferred 557 properties to Burke Mountain Southeast. The property taxes for 2013 have not been paid. Property taxes from 2009-12 also are due on 589 properties owned by South Mountain.

Also on March 6, 2013, South Mountain Preserve, LLC transferred 29 properties to Burke Mountain Southeast. The property taxes for 2013 have not been paid, nor were any taxes paid on those properties going back to 2010.

Records indicate that in 2008 Hollowell sold six half-acre Pine Mountain lots to Dolly Parton’s sister, Cassie King, and her husband, Scott King. The indicated sales price was $115,000 for each, even though the average tax value of each lot was just $3,450.

In September 2008, under Hollowell’s signature, Virginia Highland Properties and Tall Pines West each deeded three lots to Mountain Overlook, making the company the owner of six lots in Pine Mountain. The excise tax indicates the sales price for each lot was $115,000 for a total price of $690,000.

Mountain Overlook has not paid any property taxes or association fees for any of the six lots. The Burke County Tax Office told CJ that Mountain Overlook owes $1,374 in taxes going back to 2008.

On April 25, CJ asked Scott King about the property in Burke County. “I don’t recall any lots being in our name. I recall it being part of the conversation, but I don’t remember the details,” he said. King said he didn’t pay any money to Hollowell or any of his companies.

“This is the way they wanted it done,” Hollowell said. ”Scott knew what was going on. They wanted the lots identified at that price. The lots were part of the arrangement for their help.”

In 2007, Hollowell was purchasing land in Burke County while a company he owned filed bankruptcy associated with a $7 million loan for a Dare County project. The filing ultimately led to Eastern Savings Bank of Maryland foreclosing on some of his Dare County properties.

In 2009, Hollowell-owned companies secured a loan from First South Bank using 11 lots in Pine Mountain as collateral. Hollowell did not repay the loan, and First South Bank directed the trustee to foreclose the deed of trust and sell the property through auction. First South ended up owning the 11 lots. 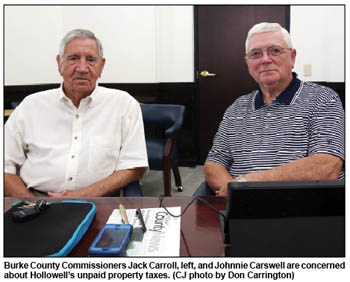 Seeking to collect past-due property taxes, Burke County officials had filed a complaint against South Mountain Land Company in December 2008. The complaint sought a total payment of $11,005 for unpaid taxes on 145 parcels

Attorney Daniel Kuehnert, an attorney representing the county, filed a voluntary dismissal in May 2012. “We dropped it because Hollowell eventually paid the taxes and some of our legal fees,” Kuehnert told CJ.

Records show that Hollowell made several property transfers from one company to another without addressing past-due property taxes.

Burke County Commission Chairman Johnnie Carswell and Commissioner Jack Carroll told CJ that Hollowell had taken advantage of county procedures allowing a deed to be recorded without the assurance that property taxes had been paid. In March 2014, the Burke County Board of Commissioners closed that loophole. The board passed a resolution banning deeds from being recorded if taxes are delinquent. This process affects all deeds recorded May 1, 2014, and after.

The Register of Deeds now will refuse to record a deed that has not been certified and stamped by the Burke County tax office.

“Back taxes is our issue, but it was so convoluted. This is hard to piece together because there were so many companies involved, but I also became alarmed when I saw some of the same names involved in here that were involved in Roanoke Rapids,” Carswell said.

“I don’t want the county to own his lots in Pine Mountain, but foreclosure is the leveraging tool we have,” Carswell said. “We have to treat everybody equally. Hollowell got special treatment because we couldn’t pin down who owns what,” Carroll said.

Bills to expand outdoor seating at restaurants moving through legislature

Trump says RNC may not head to Charlotte after all