State will appeal, notes incorrect voting guides have been mailed 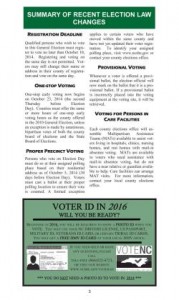 A mere 22 days before the start of early voting and with 4 million voter guides in the mail to North Carolina residents, the 4th U.S. Circuit Court of Appeals on Wednesday ruled that the state cannot enforce the parts of its election law eliminating same-day registration during early voting and prohibiting voters from casting ballots outside their precinct.

Reaction was swift, with opponents of the law hailing the ruling as a victory against voter suppression. Supporters of the law and state election officials argue that the ruling could throw the upcoming election into chaos. A prompt appeal to the U.S. Supreme Court is expected. On Monday, the high court reversed lower court rulings and allowed a law reducing the early voting period in Ohio to remain in effect, citing the problems election officials would face given the brief time before the elections.

“We’re filing a stay application with the Supreme Court and I’m optimistic that it will be granted,” said Thomas Farr, an attorney representing state officials who are defendants in the lawsuit.

“We are concerned that changes so close to the election may contribute to voter confusion,” said Kim Westbrook Strach, executive director of the State Board of Elections. “More than 4 million voter guides have gone to the public with information contrary to today’s decision.”

Josh Lawson, a spokesman for the State Board of Elections, said that the Judicial Voter Guide already has been printed and is out the door.

It says, “Registering and voting on the same day is not permitted.” It also notes that, “Voters must cast a ballot in their proper polling location to ensure their vote is counted.”

A statement released by Lawson said that an appeal to the Supreme Court could come today. He encouraged voters to stay informed of further developments.

The three-judge panel ruled 2-1 to overturn a ruling in which federal District Court Judge Thomas Schroeder declined to block implementation of the new law. The two judges in the majority are Judge James Wynn Jr., who hails from North Carolina, and Judge Henry Floyd from South Carolina. Judge Diana Gribbon Motz of Maryland dissented.

Wynn, writing for the majority, said the court should consider the “totality of the circumstances” in reviewing the law.

“The election laws in North Carolina prior to House Bill 589’s enactment encouraged participation by qualified voters,” Wynn wrote. “But the challenged House Bill 589 provisions stripped them away. The public interest thus weights heavily in the plaintiffs’ favor.”

House Bill 589 was passed in 2013 by the General Assembly, and included a requirement for voters to present photo identification at the polls (which takes effect in 2016) along with the challenged provisions eliminating same-day registration and voting out of precinct.

In her dissent, Motz noted the brief time between the majority’s order and this year’s election. She said that though she shares the majority’s concerns about the new law, those concerns do not establish that the plaintiffs have shown a clear likelihood of success on the merits, a requirement for getting an emergency stay — or halt — to the law being enforced.

“Election Day is less than five weeks away, and other deadlines loom even closer,” Motz wrote. “In fact, for the many North Carolina voters that have already submitted absentee ballots, this election is already underway. The majority’s grant of injunctive relief requires boards of elections in North Carolina’s 100 counties to offer same-day registration during the early voting period and count out-of-precinct provisional ballots — practices for which neither the state nor the local boards have prepared.”

In a post on his Election Law Blog, University of California-Berkeley law professor Rick Hasen — who agreed with some of the reasoning used by the 4th Circuit — suggested that the Supreme Court may reverse the appeals court order and let the state’s election law stand for now. Hasen cited Monday’s Ohio decision along with a case pending before the high court over new voter ID requirements in Wisconsin, noting that the conservative majority on the Supreme Court is concerned “about the dangers of courts changing election rules just before the election.”

Opponents of the new law, including the American Civil Liberties Union, the Southern Coalition for Social Justice, and the N.C. Democratic Party, hailed Wednesday’s action by the appeals court. Opponents, including Republican Gov. Pat McCrory and GOP legislative leaders, decried it.

“The court’s order safeguards the vote for tens of thousands of North Carolinians,” said Dale Ho, director of the ACLU’s Voting Rights Project. “It means they will continue to be able to use same-day registration, just as they have during the last three federal elections.”

“This is a victory for voters in the state of North Carolina,” said Allison Riggs, a staff attorney at the Southern Coalition for Social Justice. “The court has rebuked attempts to undermine voter participation.”

“Democracy is only as good as the number of voices you have engaged in the process,” said Casey Mann, executive director of the N.C. Democratic Party. “It’s our hope that this court decision is the first step of many to expand the franchise, increase democratic participation and [sic] moves us close to moving our state back on track.”

McCrory disagreed. “I have instructed our attorneys to appeal to the Supreme Court so that the two provisions rejected today can apply in the future and protect the integrity of our elections,” McCrory said Wednesday.

“We share the concern of Judge Diana Gribbon Motz — the panel’s senior judge — that rewriting reasonable rules requiring people to vote in their own precinct and register in advance will strain our voting system, confuse voters, and disrupt our general election that is only a month away,” Tillis and Berger said. “We intend to appeal this decision as quickly as possible to the Supreme Court.”

Cooper runs against Forest, NCGA in only debate for governor