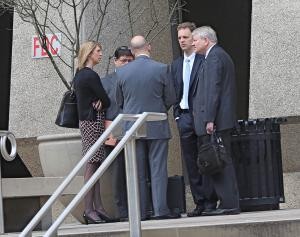 A defamation lawsuit filed 13 years ago by Gene Boyce and three other Raleigh attorneys against Attorney General Roy Cooper, his 2000 campaign committee, and campaign worker Julia White finally is scheduled for a jury trial in April. On Friday, Superior Court Judge W. Osmond Smith III, who was assigned to preside over the case, set a trial date of April 28. (See Editor’s Note at end of story.)

The plaintiffs allege that Cooper and his committee ran a political ad that was defamatory and constituted an unfair and deceptive trade practice, and that they participated in a conspiracy to violate a North Carolina law prohibiting false ads during election campaigns.

At Friday’s hearing, Smith met in a Wake County courtroom with the four plaintiffs — Gene Boyce, Dan Boyce, Philip Isley, and Laura Isley — and five attorneys representing Cooper. Gene Boyce, 81, took the lead role with his team, and Greensboro attorney Jim Phillips acted as the spokesman for the Cooper team.

The purpose of the hearing was to set a trial date, but Smith quizzed each group about the possibility of settling the matter without a trial. Each side indicated that a settlement was unlikely. The discussion then became about possible trial dates.

Phillips said he had a knee replacement scheduled this week and that his doctor told him that the earliest he would be ready for a trial would be late March.

Boyce was visibly agitated when learning of Phillips’ medical issue and told the judge that he was ready to start immediately. “Your honor, I have had four witnesses that have died,” he said. He also noted that, because of the delays, “We will have been at it 4,851 days” by the time the case goes to trial.

A Wake County judge dismissed Gene Boyce’s initial complaint in April 2001 for “failure to state a claim upon which relief can be granted,” but Boyce did not give up.

In September 2002, the North Carolina Court of Appeals issued a ruling on Boyce’s appeal of the initial hearing. The court concluded that the “plaintiff’s complaint presented a sufficient claim upon which relief could be granted for defamation and unfair and deceptive trade practices,” and “that the trial court erred in dismissing plaintiffs’ complaint.”

The case has been before state and federal appellate courts on eight occasions. In May 2012, the U.S. Supreme Court — for a second time — denied Cooper’s request to review the matter and end the case in his favor. Each appellate court decision has moved the plaintiffs toward their goal of a jury trial.

One week before the 2000 election, Cooper’s campaign started running a television ad that read: “I’m Roy Cooper, candidate for attorney general, and I sponsored this ad. Dan Boyce: His law firm sued the state, charging $28,000 an hour in lawyer fees to the taxpayers. The judge said it shocks the conscience. Dan Boyce’s law firm wanted more than a police officer’s salary for each hour’s work. Dan Boyce — wrong for attorney general.”

The ad contained statements that were not true. When the advertisement was running, Dan Boyce, Gene Boyce, Philip Isley, and Laura Isley were partners at the Boyce & Isley law firm in Raleigh. Dan Boyce did not work on the lawsuit the ad referenced, also known as the Smith case. The Boyce & Isley law firm had not been created. Gene Boyce and attorneys from the Womble Carlyle Sandridge & Rice law firm filed the Smith lawsuit.

Also, Gene Boyce was not the candidate, and he did not charge $28,000 an hour to the taxpayers in the Smith case. The judge sets legal fees in class-action lawsuits, and the final payment to the attorneys was less than 10 percent of the amount Boyce initially requested and much lower than the amount alleged in the ad.

Cooper continued running ads making those statements after Boyce & Isley formally requested that they be pulled and retracted, Boyce’s lawsuit says. On the second day the ad ran, Boyce & Isley notified the Cooper Committee in writing about the statements in the ad and requested that he retract them immediately. Cooper ignored the request and continued to run the ads. Gene Boyce said that Cooper’s ad ran at least three times a day for seven days on more than 20 television stations.

The four attorneys filed their lawsuit the day before the election. In three court filings from 2003 and 2008, Cooper stated, “The political advertisement is true.”

In addition to Phillips, in court Friday representing Cooper were attorneys Allison Van Laningham, Eric David, Charles Coble, and Alan Duncan. Several other attorneys have worked on the case for Cooper.

Cooper is using his personal liability umbrella insurance policy to pay for his defense. That allows him to keep confidential how much he has paid for attorneys, something he could not do if he were using a campaign account or legal defense fund.

Van Laningham did not respond to questions Carolina Journal posed in November about attorney fees, but a retired attorney familiar with the case says that Cooper’s legal expenses to date should exceed $400,000.

The involvement of Cooper’s insurance company surfaced publicly through a 2005 complaint to the State Board of Elections filed by retired Raleigh attorney Bernard Harrell. He had noticed that Cooper’s campaign committee was not reporting any legal expenses related to the Boyce lawsuit and believed that legal services associated with the lawsuit should be accounted for publicly.

After investigating the matter, the State Board of Elections ruled that, according to North Carolina law, legal defense activities such as Cooper’s did not have to be reported through the normal campaign reporting procedures.

But Harrell’s complaint forced Cooper’s campaign attorney to reveal exactly how Cooper was paying attorneys for his defense against the Boyce lawsuit.

“Upon receipt of the complaint, Mr. Cooper placed his personal insurance carrier on notice of the claim against him and his committee, and his carrier retained counsel to provide a defense to Mr. Cooper, which defense could best be effected by representation of both Mr. Cooper and the Committee. More specifically, legal counsel was retained by Mr. Cooper individually and his insurance carrier, not the Committee,” wrote Cooper’s political committee attorney John Wallace in March 2005 in response to the Elections Board inquiry.

CJ asked Harrell to estimate the amount of Cooper’s legal fees since the inception of the lawsuit. “Having examined the documentation, including petitions to the United States Supreme Court, I formed an opinion that the legal fees in the Cooper matter are in excess of $400,000,” Harrell said in November.

Editor’s Note: Morgan Jackson, a spokesman for the Cooper campaign, contacted CJ Monday in response to a telephone message left Saturday: “The ad was based on extensive research, including court records and the Boyces’ own campaign materials and statements. We have tried to find a reasonable resolution to this matter for years and will continue to do so. If a resolution cannot be reached, we look forward to telling our story in court.” Jackson added that this would be the only statement the campaign would be making at this time.

GOP-led legislature made sure we saved for this rainy day