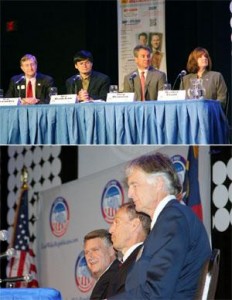 WENDELL – U.S. Senate hopeful Greg Brannon issued fiery constitutional rhetoric and delivered the biggest applause lines Friday night from an audience of about 600 people as he ran away with a straw poll at a Republican candidates forum.

He seemed equally focused on differentiating himself from Tillis, a national GOP favorite considered to be the GOP front-runner, and heaved a political dart at the House speaker for not appearing at candidate forums.

Brannon praised his fellow candidates as “very nice people. I’ve got to meet them over the past few months. It’s been phenomenal. I wish I could meet Mr. Tillis more as well.”

Downplaying the endorsement swagger, Snyder, who lost to Elizabeth Dole in the 2002 U.S. Senate primary, deadpanned: “I’m endorsed by my wife. I think.”

The candidates’ answers were mostly red meat for the Republican audience, varying only by degree.

All were pro-life; supported traditional marriage, tax reform, a strong national defense, and the Constitution; called for the repeal of Obamacare; argued the government must reduce burdensome regulations; and backed domestic digging, fracking, and drilling for fossil fuels to reduce America’s dependence on energy imports.

Brannon cited “a clear distinction” between him and Tillis on Obamacare. “He was the one who said Obamacare is a good idea, we just can’t afford it,” said Brannon, who advocates repeal. Health care is not mentioned in Article I, Section 8 of the Constitution enumerating the government’s powers, he said.

“We believe health care is so important we must keep the federal government out of it,” he said. “Obamacare destroys the individual whereas the collective dehumanizes. The answer is it is not American,” he said in one of his bigger applause lines.

“We need free markets. We need our insurance companies to compete for our dollar,” said Grant, a family nurse practitioner of Wilkesboro and former Army nurse.

Kryn, who became a U.S. citizen after living and practicing medicine in Canada, said over time Obamacare would have similar impacts in the U.S. as Canada’s socialized medicine. The single-payer system has killed jobs, especially in the pharmaceutical industry, “because the initiative to do research was gone.”

Grant said Congress should enact the Penny Plan — taking one penny from each dollar allocated to federal departments and programs, and using it to reduce the $17 trillion federal debt, acknowledging some earmarks are statutorily off limits.

Extra pennies could come from other areas, “like entitlements for people who are here illegally, and we save our money for our Department of Defense” and border security, she said in one of her best-received answers.

Snyder, who spent a year in the North Carolina House completing his father’s unfinished term, railed against the North American Free Trade Agreement for killing jobs, especially in the furniture and textile mill industries in places such as Davidson and Cabarrus counties.

“It hasn’t just been the wild-eyed liberals in Congress,” but conservatives, too, who voted to approve NAFTA, he said. “Jefferson said he’d put a tariff on everything we produce. A bit much, but there’s something instructive there” for debt reduction.

Alexander said the federal government should have a balanced budget amendment to proscribe debt spending, and the president should have line-item veto power to get debt under control.

When including unfunded liabilities, the federal debt is somewhere between $110 trillion and $220 trillion, not just $17 trillion, Brannon said.

From 1792 to 1913 with the true gold standard, the value of the American dollar increased 17 percent, Brannon said. Since the Federal Reserve was created, the dollar’s value has decreased from between 98 and 99 percent. “A dollar in 1971 is now worth 15 cents,” he said.

Harris said federal programs “that are continuing to kill the whole spirit of entrepreneurship in this country” should be eliminated. Entitlements and eligibility qualifications for social welfare programs must be reformed.

All the candidates spoke in favor of a strong national defense, but Bradshaw issued a caveat.

“We need to be wary of thinking we’re so strong that we can intervene in other countries,” he said. “I think Iraq has taught us that lesson.”

Grant got her most sustained applause when she said the president, Congress, and secretary of defense do not understand we have “multiple enemies” in the world and “we do not want them to bring war to us.” The only way to prevent that “is to be strong enough to take it to them when we have to.”

The audience responded warmly when Harris criticized the Obama administration’s “leading from behind” foreign policy.

Harris said it has led to Defense Secretary Chuck Hagel calling for spending cuts that would make the defense budget the smallest since 1940, and emboldening Soviet President Vladimir Putin’s incursion into Ukraine “while we simply wring our hands, and scratch our heads, and say there is nothing we can do.”

The candidates all supported various means of tax reform.

Alexander said the “Internal Revenge Service” oversees “an incredibly convoluted tax system … beyond comprehension.” He, Grant, Harris, and Kryn all leaned toward or favored the consumption-based Fair Tax system. Bradshaw said more focus should be put on payroll taxes because they take more money from a worker’s paycheck than income taxes.

Brannon got repeated applause when he said the federal government’s taxing authority is restricted by the Constitution, and called for the Fed to be audited and eliminated.

“There are three crimes in Constitution: Piracy, counterfeiting, and treason, and the Fed does all three,” Brannon said. If elected, he said, his job would be not just “to bring home the bacon, but keep the whole pig.”

In his closing statement, Brannon said: “First and foremost, Miss Hagan must come home. I’m the only candidate that’s beat her six months in a row” in the polls.

Quoting author George Orwell, he said: “In a world of ultimate deceit, telling the truth is a revolutionary act,” urging voters to support him and “be revolutionaries.”

“There’s a constitutional crisis … there’s a leadership crisis in this nation,” Harris said. “We need a leadership of character that doesn’t bring baggage to the table” that would shift focus to the GOP opponent and allow Hagan “to run away from her record.” He noted he is the only Republican who beats Hagan outside the margin of error in two statewide polls.

He said Huckabee has told him they do not need to read the latest polls to determine where to stand on an issue. They are consistent in their beliefs because they forged them long ago. And he said he has “the courage to stand even if it means standing alone.”

“If you send this fighter to Washington, I promise liberals will never capture our freedoms, government will never control our lives, and freedom will always, always, always ring loudest in these, our, United States of America,” Snyder said.

“I know how to plan how to lay a foundation, and how to leave it for the next person who comes behind me,” Grant said. “If we don’t take this seriously, and start truly taking our country back in 2014, we will lose it.”

Alexander said he has experience in economic development and industrial recruitment, and embodies “those conservative North Carolina values we hold dear.” He said if he is sent to Washington he would roll up his sleeves, get to work, “and not become one of them.”

Bradshaw said he wants to serve as senator to reverse troubling trends. “We live in a country where more than 1 million children are slaughtered [by abortions] each year,” traditional marriage is under threat, government programs exceed the bounds of the Constitution, and young people have a higher opinion of socialism than capitalism.

Kryn said he is in the race “because of the assaults on religious liberties” and personal freedoms, and his opposition to corporate cronyism and taxpayer bailouts of businesses.

“Freedom is synonymous with America around the world, and to see this freedom taken lightly by the politicians in Washington, I believe, is counterproductive to the future of this country” and its ability to deliver an effective voice of hope and authority to others around the world, Kryn said.