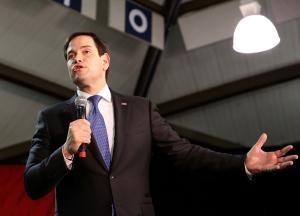 The campaign estimates that 1,300 filed into the Gov. Jim Holshouser Building on the State Fairgrounds to listen to Rubio, who is on North Carolina’s March 15 presidential preference primary ballot. Other estimates placed the attendance at slightly less than 1,000.

Joseph Coniker of Cary came to the rally as an undecided voter. And while he said he remains undecided, Rubio did nothing to hurt his cause. He said Rubio was “passionate.”

“I think he understands what needs to occur in the country,” Coniker said. “And he understands family, policy, and also the things that make this place tick — this place being our families and our country. I haven’t made up my mind yet, but this was very positive.”

Miriam Mathew, a Raleigh resident who is a legal immigrant from India, also had a positive impression of Rubio.

“He stands for everything I believe in,” Mathew said. “He’s also young. The safety of the nation is very important. If we don’t have a safe nation, we don’t have any economy at all.”

Nineteen-year-old Jonathan Rife of Apex, one of a number of younger voters in the crowd, will be casting his first vote for president this year.

“I think he definitely showed his strength in foreign policy,” Rife said. “I think that’s what the country really needs.”

Rife remarked that it was good to see other young voters at the rally. “The Democrats dominate the young people vote.”

Rife also said he liked Rubio’s support of a free-market economy. “My dad lost his job during the recession under President Obama,” Rife said. “I just see so many fellow classmates and people I love and I know, they can’t find good jobs anymore.”

Rubio said voters should support Republicans who separate themselves from the policy positions of the Obama years, and that Republicans should not assume that the best nominee is someone who’s spent a lifetime in Washington politics. “You can’t elect Republicans that agree with a lot of what Barack Obama’s for,” Rubio said. “We can’t elect the next person in line. … We’ve done that now for 20 years and nothing changes.”

“This election is a generational choice,” Rubio said. He said that American has a choice to either be greater than we’ve ever been, or be the first generation to leave our kids worse off than the previous one.

Kathy Turner of Raleigh said she was “really struck” with what Rubio’s focus on the future, agreeing with him about the necessity of leaving the country better off for the next generation.

“They attack me every day,” Rubio said of the Clinton campaign and its supporters. “Half their emails are all about me. They don’t want to run against me.” Rubio said.

He hit on a number of other issues.

On the economy and taxes, Rubio said he wants to fix the tax code so that businesses won’t want to move their corporate headquarters outside the United States. He also criticized Obama for abandoning free-market principles. “We’re going to return to free enterprise,” Rubio said.

He told the crowd how a proposal he introduced helped wipe out an Obamacare bailout fund that shifts costs among insurance providers. “When I’m president, we’re getting rid of Obamacare and we’re going to put you back in charge of your own health care,” Rubio said.

As the son of Cuban immigrants who fled Fidel Castro’s dictatorship, Rubio said he understands immigration better than anybody else. “I know every aspect of this issue personally,” Rubio said. “This issue has changed.” He said ISIS is trying to use our immigration system against us. He said the immigration issue has become a national security issue.

Rubio said the most important thing a president does is keep the country safe, saying that Obama has failed in that job. He noted some of the things other candidates are saying about terrorism.

Rubio also called for improving veterans’ benefits and allowing veterans who are not satisfied with the Veterans Administration to transfer their benefits and coverage to other hospitals and doctors.

Locke’d and Loaded: The Covid death toll and the murky data