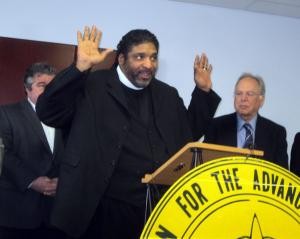 The Rev. William Barber, president of the NC NAACP and initiator of the Moral Monday protests, continued his attack Tuesday on what he called “a monster voter suppression bill” and likened efforts to award Opportunity Scholarships to children from low-income families to segregationist actions of the 1950s and 1960s.

“You cannot dismiss the racialized components of what McCrory and Tillis and Berger and the extremists are doing,” Barber said.

At times, Barber appeared to be trying to coach the journalists gathered for the press conference on how to frame their stories. He suggested that they look at the state’s racial history when it comes to covering stories on measures approved in 2013 by the General Assembly, including school vouchers and the broad election law changes, such as a requirement that voters present state-issued photo identification at the polls.

Barber said reporters should look at the current voucher proposal through the state’s racial history.

“Don’t let them get away with misportraying what this is all about,” Barber said.

Specifically, he referred to the Pearsall Plan, adopted in the 1950s, which attempted to provide state tuition for children to attend private schools so they could avoid attending integrated schools as a result of the 1954 Brown v. Board of Education U.S. Supreme Court ruling.

According to the N.C. History Project, Democratic Govs. William Umstead and Luther Hodges created committees chaired by Thomas Pearsall to oversee the state’s response to the Brown decision. Pearsall was a Rocky Mount farmer and former House speaker. The Pearsall Plan was ruled unconstitutional in 1969.

Holmes said that the voucher program would not work for poorer children.

“The assertion that the voucher program is for the poor is simply not true,” Holmes said, arguing that the $4,200 scholarship would not cover the cost of tuition that most private schools charge.

Allison noted that more than 4,000 children had applied for 2,400 Opportunity Scholarships before Superior Court Judge Robert Hobgood last week put a halt to the program by issuing a preliminary injunction against the program.

“We had almost twice the amount of families that were allotted,” Allison said. “There is real pent-up demand for this.”

Barber also said that minority children were being used to get sympathy for voucher programs.

“The pro-voucher advocates admit to needing minority spokespeople to legitimize themselves,” Barber said.

Allison responded that the pro-voucher effort in North Carolina has been a grass-roots movement.

“There’s no denying the fact that the families that take advantage of this are mainly families of color and low income,” Allison said. He said that is true in other areas of the country where vouchers are used, such as Milwaukee, Wis., Florida, and the District of Columbia.

“At some point, we have to give real opportunities, and hopes of finding a solution,” Allison said. “The Opportunity Scholarship program is not the silver bullet. But it will be the solution for quite a few people if we allow that to happen.”

Barber also criticized the state, particularly legislative leaders, for objecting to demands from the NAACP to provide background documents used by legislators when preparing the voter ID and election law legislation.

Legislators have based their opposition on the principles of separation of powers and legislative privilege.

Barber noted that the legislators campaigned on a platform of enacting a voter ID requirement. “Now that they have done it, they want immunity,” Barber said. “That’s extraordinary. … That’s deeply troubling.”

“Whenever the U.S. is sued on any legislation that has been passed by Congress, you never see members deposed, because that’s not relevant,” von Spakovsky said.

Von Spakovsky said that Barber, by making that assertion, does not understand the law.

“He doesn’t seem to believe in some of the basic principles that govern this nation, like separation of powers,” von Spakovsky said.