By 5-4 vote, elections board says Jennifer Mangrum, who left husband and daughter in Greensboro, established residency in Rockingham County

Senate leader Phil Berger, R-Rockingham, will have a Democratic challenger in the general election after all.

After two hours of debate July 12, the Bipartisan State Board of Elections and Ethics Enforcement reversed a local elections panel’s decision disqualifying Jennifer Mangrum from the race. In what is becoming a familiar 5-4 split — with unaffiliated member Damon Circosta siding with the board’s four Democrats against the four Republicans — the state board said the panel of county elections officials it hand-picked erred in deciding Mangrum did not live in the district.

“I’m just really happy that it turned out the way it did. I had truth on my side. I’m a happy resident in Rockingham County, in Reidsville. I’m disappointed it had to come this far, but I’m really excited, and ready to move on,” Mangrum said after the hearing.

“I did want it to be unanimous, and I’m very disappointed that it went down party lines,” said Mangrum. She appealed a decision from a five-member hearing panel chosen from local elections boards in Caswell, Stokes, Surry, and Rockingham counties, which are in Senate District 30. Other filings can be found here.

Lawyers for the opposing sides and state board members debated technical distinctions between legal requirements that must be met to establish candidate residency in a district, and a lower panel’s findings of fact, and which should control the state board’s decision-making authority as an appellate body.

They said it was clear from their reading of the case the lower panel simply got it wrong based on the whole record, and should be reversed.

Republicans John Lewis, Ken Raymond, Jay Hemphill, and Stacy Eggers wanted either to uphold the lower panel’s decision, or send it back for a rewrite relying more on the facts they used for the decision instead of quotes from the transcript. They all voted against overturning the decision.

This isn’t the first tricky residency challenge to come before the state board.

A similar case involving a challenge against Sen. Ben Clark, D-Hoke, was heard May 3. Clark’s credibility in denying he moved outside his district was in question. That matter figured into Thursday’s debate, in which Mangrum’s credibility was in dispute.

In the Clark case, Penry, the state board chairman, said the board can rule only whether the lower board’s decision followed the law, and not on Clark’s credibility.

“We’re certainly not allowed to substitute our judgment of credibility for that of the board below,” which took testimony, received evidence, and had the opportunity to judge witness behavior and believability, Penry said.

Lewis said Democrats wanted to do the opposite in the Mangrum case “because of a desired political outcome.”

Eggers also was troubled with the state board substituting its judgment for the lower board. He reminded that the state board chose the most senior county elections officials — representing more than 70 years’ combined experience — to hear Mangrum’s case.

Malcolm took offense at the inference that Democrats based their decision on partisan politics.

“The voters in this district can decide what they want to do” with the information presented at the hearings, Malcolm said. 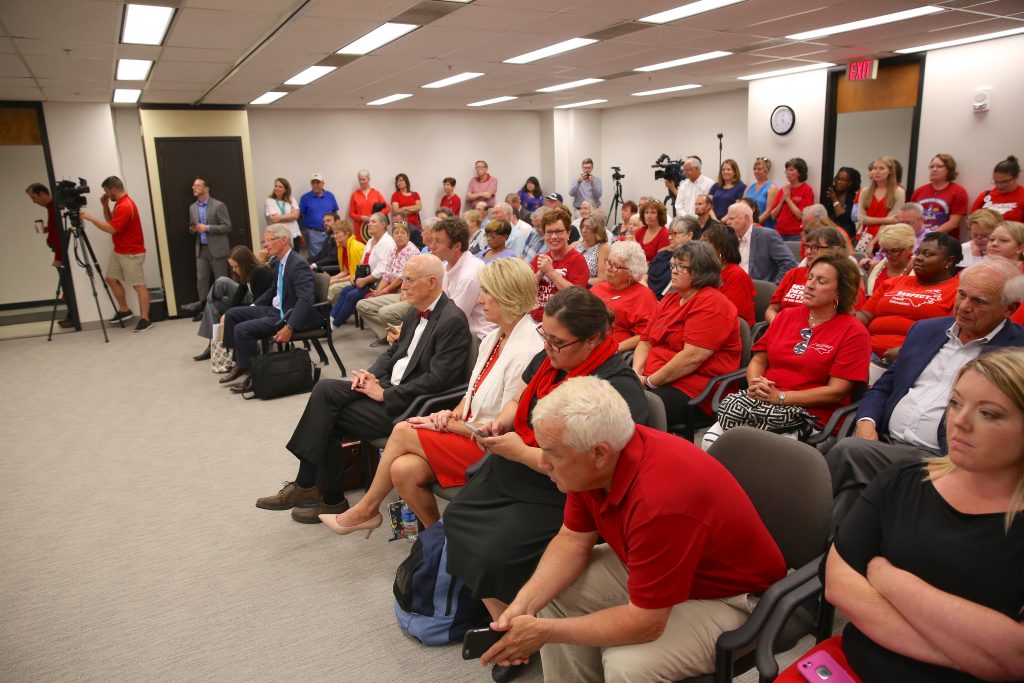 Jennifer Mangrum, third from right on front row, was joined by supporters wearing red July 12 at her residency challenge hearing at the Bipartisan State Board of Elections and Ethics Enforcement. (CJ photo by Don Carrington)

Mangrum’s supporters included women teachers from around the state, some clad in red T-shirts. The supporters disrupted the hearing at one point with raucous applause as board member Stella Anderson alleged gender bias in Mangrum’s case. Penry warned against further demonstrations, and reminded the supporters they were in a quasi-judicial proceeding.

Mangrum and her husband are separated. Her husband and daughter remain at the family home in Greensboro, which was in Berger’s district until last year when a federal court ordered state legislative boundaries to be redrawn. Mangrum moved to Reidsville, which is in Berger’s redrawn district. She changed her driver’s license, vehicle registration, mailing address, employment, and credit card accounts to reflect her new residence.

Anderson triggered the outburst by saying if Mangrum’s husband had moved out, saying he wanted to run for office, he would not have received the same level of scrutiny.

Gary Rickner, the attorney representing challenger Billy Cushman, said the local panel used a variety of factors to make its decision. While Mangrum’s testimony and evidence were undisputed, they raised a host of credibility issues. A person’s conduct and credibility has more legal weight than a stated intent to live permanently in a new district, he said.

“It is odd. I admit that,” Mangrum said of her move to another county away from her family. “I decided that someone needed to stand up to Senator Berger, and I was going to be that person.” She said Berger was her senator for 18 years, and she was unhappy with his representation, especially on public education. She taught elementary school for 15 years, and now works at UNC-Greensboro.

Berger was opposed just three of the nine times he has run for the district, and Mangrum said it was important to not allow a candidate to run unopposed.

She said the residency challenge and appeals have helped her campaign.