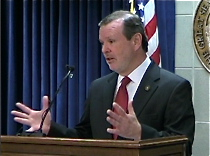 “I think we’ve seen an evolution over the past several years in how public officials communicate with people,” said Berger, R-Rockingham.

On Wednesday’s Facebook post, Berger took issue with Cooper over whether lawmakers would have to choose between giving salary increases to teachers and raising taxes. “Legislative Republicans have already provided public school teachers an average 15.5 percent pay raise since 2013 and have already committed to increasing average teacher pay to $55,000 – WITHOUT raising taxes!” Berger said.

Berger said using social media has many advantages. He said he could conduct a 10-minute interview with a newspaper reporter and perhaps get one sentence in a story. He could give a five-minute discussion with a TV reporter result in a 20-second clip.

“I think the advantage is…if we have something to say, we can say it in our own voice and using the language that we want to convey,” Berger said, adding that lawmakers don’t plan on “totally ignoring” old-fashioned interviews with reporters.

“I think you’ll see more of this thing,” Berger added.

“I think there are all sorts of examples of Twitter going awry,” Berger said. “I think you have to be careful how you message using those avenues.”