$136 million paid out in 2015, led by BCBSNC, Duke Energy; all 23 entities getting $1 million or more were large corporations

As in past years, the lion’s share of the 2015 tax credits awarded for investing in renewable projects went to large banking and insurance companies. The 23 entities receiving $1 million or more in credits were large corporations. Of the top 86 recipients awarded at least $100,000 in tax credits, only six were individuals. 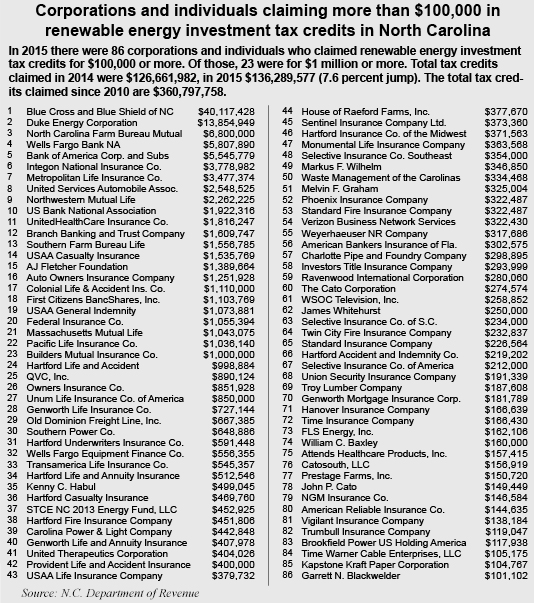 “It sort of feeds into the theme that it’s corporate welfare,” said Donald Bryson, North Carolina state director at Americans for Prosperity.

“I definitely feel there’s a lot wrong with that,” said state Rep. Chris Millis, R-Pender. “It’s another example of how big business snuggles up to government for their benefit, at the demise of the very citizens we’re supposed to represent.”

Millis said the huge 2015 tax credit windfall to large corporations “is just another continuation of the arguments of why we fought to sunset it last session.” He said politicians were picking and choosing winners by “subsidization of this specific form of energy over all others.”

Special treatment of the renewable industry produces no net environmental benefits because solar and wind energy are “intermittent and unreliable,” Millis said. Solar energy isn’t produced when the sun’s not shining, and wind energy is dead when there is no wind blowing.

Both renewables require a “redundant shadow grid” usually provided by coal- or gas-fired power plants during the renewable source’s down times, he said.

While the $40 million Blue Cross tax credit accounted for nearly 30 percent of the 2015 total, spokesman Lew Borman said that, put in context, “BCBSNC is a fully taxed North Carolina business, and last year incurred more than $372 million in state, federal, and local taxes.”

The company invested in both solar and mill tax credits, Borman said.

“These are investments in North Carolina communities, and North Carolina infrastructure in revitalizing old mills, and diversifying North Carolina’s energy grid,” he said. “These investments create real jobs, construction jobs, and permanent jobs, as well as assist in the diversification of our energy sources.”

Although the 35 percent tax credit program ended at the close of 2015, the credit can be spread over five years, so it is possible that the volume of issued but unused tax credits carried forward could continue the upward trend in future years. But projecting a trend “is difficult due to a number of variables,” Revenue Department spokesman Trevor Johnson cautioned.

Because a renewable tax credit cannot offset more than 50 percent of a recipient’s tax liability, and due to the five-year window for use, “what a business or individual may be eligible for likely differs from year-to-year,” Johnson said.

Therefore the Revenue Department “does not track or have a ‘remaining tally’ of what credits may be claimed in the future on an aggregate taxpayer scale,” Johnson said.

“We obviously track remaining credits, which can be taken on a taxpayer-by-taxpayer case, but unfortunately that information cannot be released due to secrecy provisions” that are part of state law, he said.

In 2015, $40.3 million in renewable credits were claimed by 1,162 companies and individuals for activities that occurred before 2015 but were carried forward to that tax year. Those credits could have resulted from investment in projects or purchase of the credits, which can be transferred by the original investors to third parties.

Maggie Clark, a spokeswoman for the N.C. Sustainable Energy Association, a trade group that lobbies for the renewable industry, defended the tax credit.

“Renewable energy in North Carolina was responsible for $1.97 billion in investment in 2015, resulting in considerable tax base for communities who need it most,” Clark said. In all, 85 percent of the investment occurred in Tier 1 and Tier 2 counties, the most economically distressed.

However, Revenue Department data shows only $892 million in spending related to the tax credits.

“Non-refundable tax credits like the Renewable Energy Investment Tax Credit do not take money from state coffers,” Clark said. “They simply reduce the tax liability of taxpayers who make these investments in our communities. It is money that is never collected by the government, so how can it come out of state coffers?”

“In a sense they’re right,” Bryson said. “It’s a tax credit, so it’s not necessarily like the state is paying them like a pure subsidy.” But because the General Assembly passed the renewable subsidy legislation, the large corporations in the special interest renewable industry “got to keep $136 million that the rest of us had to pay into the system. That’s how it’s being subsidized.”

The 2015 renewable credits were “a lot of money,” Bryson said. “They could fund towns, or several school systems with $136 million.”

Indeed, a Carolina Journal review of the House 2016-17 budget determined that if that $136 million had been collected it could have funded various combinations of state appropriations for such things as:

While reports abound that renewable energy companies are lobbying lawmakers to reinstate the tax credit, Clark would not say if her association was directly involved in any discussions. “NCSEA is aware of legislators on both sides of the aisle, and in both chambers that want to advance new policies so that North Carolina can see more clean energy jobs and investments,” she said. “The details and timing of these efforts is at the discretion of policymakers.”

Millis said he remains vigilant in opposition to reviving the tax credit.

“If it rears its head I would do everything I can to fight for the taxpayers of this state,” he said.