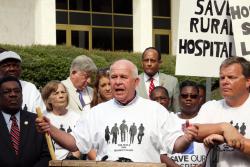 Two rural hospitals could be reopened under state legislation that includes the first substantive reform of North Carolina’s certificate of need regulation.

Pungo District Hospital in Belhaven could be the first beneficiary of the legislative change to the state CON law contained in an amended version of House Bill 20, which awaits a final vote in the House. Yadkin Valley Community Hospital in Yadkinville stands to benefit from a separate provision in the bill.

A certificate of need basically amounts to a government grant of permission to operate and purchase various health care facilities and equipment. According to a study by the Mercatus Center at George Mason University, only three other states have CON laws more restrictive than North Carolina’s.

The amendment would “reduce the overly burdensome regulation required of financially challenged rural hospitals. It will allow small rural hospitals more easily to change management with less disruption of health care in their communities,” Cook said.

Existing hospitals can forgo the lengthy certificate of need review when changing hands. That exemption would expand to include hospitals that have closed, so long as the state Division of Health Regulation receives written notice that the hospital would reopen within 36 months.

“You know that the system is broke when we as elected officials and citizens have to petition our government in this manner to get something that we are entitled to in any free economy,” said Beaufort County Commissioner Hood Richardson.

“The system is run on money right now, and the system in North Carolina is concentrating money into mega-hospitals” when it should allow free-market competition in the health care arena, Richardson said. “The certificate of need law is a protection racket for the big boys.”

Connie Wilson, a lobbyist working for CON reform to allow orthopedic and ophthalmology ambulatory surgery centers to open, said H.B. 20 is a small bite of the apple.

Vidant Health took over management of Pungo, the investor-owned hospital serving Beaufort and Hyde counties, two of the state’s geographically largest and poorest, in 2011. It closed the facility in July 2014.

“Vidant Health believes that a new facility, which delivers a new ambulatory model of care, is the best path forward for the health care needs in the Belhaven area,” said spokeswoman Christine Mackey.

“Continuing to operate an out-of-date facility under a traditional inpatient model of care is not a sustainable model of health care for the broader community. Our board reached this conclusion more than two years ago, and Vidant Health worked with the mayor and the town during mediation to assist them in taking over the hospital, yet they did not take the steps necessary to do so,” Mackey said.

Shalanda Satterthwaite, 27, of Belhaven, wants Pungo District Hospital to reopen. She credits it for saving her life from a stroke when she was 4 years old.

“I would be dead” if the Belhaven hospital were not open then, she said. Her mother, who suffers various medical ailments, now must drive a long distance for hospital care.

Billie Mackey, a senior citizen, attended Wednesday’s rally in a wheelchair. She said she and her friends in Belhaven have been affected by the hospital closure.

“Several of them had to be transported all the way into Washington to get emergency care,” she said. “If I had a medical emergency, I would have to depend on a helicopter or an ambulance to get me to a medical center, and the first hour is the critical one.”

Dr. Charles Boyette, a family practice physician in Belhaven for 50 years who covered the hospital’s emergency room by himself for more than three decades, said without the hospital doctors no longer can evaluate, diagnose, treat, stabilize, admit, or transfer a patient.

“We are losing a lot of patients in increase in morbidity as well as mortality by not having accessibility to an acute care type of hospital which can handle emergencies that we used to handle,” Boyette said.

“We’re turning into one big transport unit and not being capable of handling the people who have real medical emergencies,” he said. People are experiencing increased and prolonged illnesses that could be treated early at the hospital, which cut down recovery time significantly.

H.B. 20 includes a provision outside of CON law that would assist Yadkin County in finding a new management group to operate the county-owned hospital. HMC-CAH Consolidated Inc. of Missouri closed the hospital in late May without warning, Yadkin County Manager Lisa Hughes said.

The county solicited contract offers from management companies, Hughes said, but there was concern whether the law required the county to reopen its request-for-proposal process every time a negotiation fell through.

“This is every bit as cumbersome as the certificate of need,” said Sen. Joyce Krawiec, R-Forsyth. “It can take years if you have to start over every single time.”

As for the CON law, “I think it should be repealed completely,” she said.

“I think it’s just a matter of time until the certificate of need is gone, so folks need to start preparing for that.” Krawiec said.