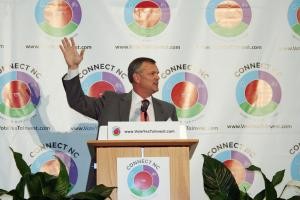 Hundreds of supporters of the $2 billion Connect NC bond referendum on the March 15 ballot gathered Tuesday on N.C. State University’s Centennial Campus to kick off a campaign they say is essential for a growing North Carolina.

Gov. Pat McCrory told the crowd at the campus’ Hunt Library that there is a heavy demand for workers with certain skill sets.

“There is a skills gap right now in our country and in our state,” McCrory said. “Where we’re putting the money in our university and in our community colleges is to help fill the skills gap we have in North Carolina so industries can find the talent needed to continue to grow.”

The bond proposal earmarks more than half of the $2 billion for various new buildings and renovations on University of North Carolina system campuses. Another $350 million would go to community colleges across the state.

During his remarks McCrory, a Republican, alluded to projects the bonds would fund at Western Carolina University, UNC-Charlotte, and N.C. A&T State University.

McCrory said the natural science building at Western Carolina was built in the early 1970s when the school had 15 nursing majors and no engineering majors.

“Today, Western Carolina has about 2,300 students in health and human sciences programs, which we majorly need right now more than ever,” McCrory said, adding that there are 600 students in technical and engineering programs, and 500 in biological and physical science programs.

Maintenance costs in the science building at UNC-Charlotte, which was built in 1985, “are costing more than the building is worth,” McCrory said.

He also made a push for a new $90 million science building at A&T. “We will invest more in our historically black colleges and universities to ensure that everyone has the opportunity to succeed in their chosen filed and contribute to North Carolina’s future,” McCrory said.

House Speaker Tim Moore, R-Cleveland, said lawmakers were able to pay for highway projects with existing tax revenues, so the bond proposal doesn’t include money for roads. However, he made a push for the community college component of the bond referendum. “It’s where the rubber meets the road on worker retraining,” Moore said.

Sen. Dan Blue, D-Wake, offered a note of bipartisanship. “It’s absolutely essentially for this state for its economic growth, for creating more jobs for North Carolinians,” Blue said. He said a business school building was needed for UNC-Pembroke to train business leaders for southeastern North Carolina.

“This is not a partisan issue, it is a North Carolina issue,” said Dalton, who is president of Isothermal Community College in Spindale. “It is about keeping North Carolina strong.”

Jim Rose, regional president of Yadkin Bank and treasurer of the Connect NC Committee, which is leading the push for the bonds, said the committee has collected about $750,000 from donations, and has pledges of more than $1.3 million. “Our truthful goal is really about $3.5 million,” he said.

Rose used the occasion to rally supporters, encouraging them to vote for the bonds and to encourage others to do the same.

The committee distributed yard signs at the event promoting the bond package.

Bob Orr, a former N.C. Supreme Court justice and chairman of the Connect NC Committee, said that now is the right time to borrow money for the building program.

“We’re at historically low interest rates,” Orr said. “This is a smart business decision, and it will have enormous long-term benefits to North Carolina.”

In addition to the money for the UNC and community college systems, the bonds would provide $3 million in matching grants to make local parks more accessible for children and veterans with disabilities. Another $309.5 million is earmarked for water and sewer loans and grants.

Another $78.5 million would go for National Guard readiness centers and a Department of Public Safety training academy.

An additional $94 million would pay for labs at the Department of Agriculture and Consumer Services.

State parks and attractions would get $100 million, including $25 million earmarked for the North Carolina Zoo in Asheboro.