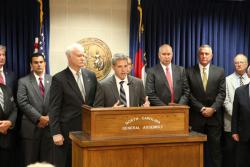 A group of Lake Norman-area business leaders traveled by chartered bus to Raleigh on Tuesday to urge state legislators to support a bill that would cancel the state’s contract with a private company to build and operate toll lanes on Interstate 77 between Charlotte and Mooresville.

After arriving at the Legislative Building, the group broke into teams and sought out legislators to make their case against the toll lane project. Later, they held a press conference — sponsored by state Sen. Jeff Tarte, R-Mecklenburg, who will sponsor legislation to undo the tolling contract — to make their case to reporters. (Full video here.)

On May 20, state officials signed a 900-page, 50-year agreement with I-77 Mobility Partners, a subsidiary of a Spanish company, to build and operate the 26-mile project, officially named the I-77 Hot Lanes Project. The project is expected to cost $648 million. Mobility Partners will set toll rates, collect the tolls, and — for the most part — keep all the proceeds.

Gov. Pat McCrory and North Carolina Department of Transportation officials maintain it is too late for the state to scrap the project in favor of nontolled alternatives. The project would be the second toll road project to be built in North Carolina and the first operated using a public-private partnership.

Tarte opened the press conference. “As contracted, we believe this project is not in the best interests of the businesses or communities of the Lake Norman region, or our state. Since June 2014 I’ve had concerns and reservations about the details of this project,” he said. He emphasized a clause in the contract limiting for 50 years the state’s ability to add new general-purpose lanes along the corridor. He said his bill would cancel the contract and find a way to widen I-77 with general-purpose lanes.

McAlpine said the toll lane project would do extensive economic damage to the region. “Several years ago our elected leaders approved the project, billed as a transportation solution. However, as details emerged and the contract has evolved, we are faced with a project that does not solve our transportation issues and it creates a much bigger economic problem,” he said. McAlpine said the group who coming to Raleigh represented more than 1,000 business owners who had been surveyed by the Lake Norman Chamber.

Wallace pointed out that the Lake Norman region was the center of the North Carolina motorsports industry and listed a number of racing industry executives who have come out against the toll lane project. “We know there is a better solution,” he said.

Puckett said opponents do not object to the project because it a toll road, but instead because of the project’s design. “The toll lanes will not serve the current exits currently serving Huntersville, Cornelius, Davidson and Mooresville. The estimated negative impact over the next 30 to 50 years is between $10 [billion] and $20 billion in lost economic development because of the design,” he said. “I am asking the governor to take a second … look at this program. Get us out of this disaster,” he said.

A reporter asked Puckett to describe how legislators had responded to his group’s concerns. Both Puckett and McAlpine said they were happy with how they had been received.

NCDOT Deputy Secretary for Communications Mike Charbonneau and an assistant attended and videotaped the press conference. Charbonneau told Carolina Journal he was there because there had been a lot of misinformation generated about the project.

Backers of the project say the state would have to pay $100 million or more to terminate the deal. But at the press conference, McAlpine cited a provision in the contract stating the arrangement could be canceled by NCDOT “at any time and for any reason.”