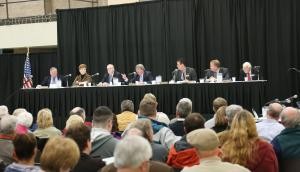 A leading opponent of building a major wind energy facility in Carteret County says it was a tourism-depressing, jobs-killing project that was defeated in spite of, not because of, a state law passed last year to regulate environmental impacts and avoid adverse health effects of electricity-producing windmills.

“We have got to get laws passed here locally that will protect us, because this state law is not going to do it,” citizen activist John Droz said of House Bill 484, a law passed in last year’s legislative session establishing a wind-energy permit-approval process through the Department of Environment and Natural Resources.

The so-called Mill Pond project was the first wind farm proposal to fall under the new procedures. The Sierra Club launched a statewide campaign supporting the utility-scale project and insisting H.B. 484 would protect against any adverse impacts.

“Every part of this bill is weak,” Droz countered. “We’re looking at 484 as a backup, if you will. Our primary line of defense is local zoning rules.”

County officials say Torch Renewable Energy, a Houston-based diversified energy company, backed away from the 80-megawatt wind and solar proposal — featuring at least 40 492-foot wind mill turbines — because strong local ordinances limited the height of structures and where they could be placed.

“They knew that to do the project … that they were going to need some variances, and setbacks for the turbines,” said Carteret County Manager Russell Overman.

“And they knew with the climate here — there was quite a bit of public opposition to their project — they probably would not stand a chance of gaining those variances. So our existing ordinance, according to them, played a very large role in their deciding not to locate their project here,” Overman said.

Torch Renewable issued a statement Jan. 31 saying it would not move forward with the project now. Even so, Overman acknowledged, and officials at the North Carolina Utilities Commission confirmed, the company has not withdrawn its permit application for the Carteret County wind farm, which would have sold the electricity it generated to Duke Energy Progress. The Utilities Commission permit approval reviews involve economic matters; DENR permits deal with environmental issues.

“What happens if the people in the local areas don’t want it? How do they get their voice heard?” asked Sen. Ronald Rabin, R-Harnett.

“I don’t see any way for people other than in the military installations having a say in this, and I’m not sure that I agree with that approach,” Rabin said.

The Utilities Commission addressed the issue in an April 24, 2008, finding of fact in a conditional order granting a public convenience and necessity certificate to a three-turbine, 4.5-megawatt wind farm proposed by Nelson Paul in the same vicinity as the Torch project.

“Local governing bodies are, generally speaking, in a better position than the [Utilities] Commission to make local land use planning decisions (so long as those decisions do not operate to thwart controlling state policy),” the order stated.

“The public convenience and necessity requires that the applicant comply with all zoning and permitting requirements and receive all necessary approvals from Carteret County for the facility,” the order stated. Paul was unable to comply with the local setback ordinances and the project was scrapped.

Droz and Overman believe the local part of the process worked again in Carteret County.

“This is a democratic success here. Citizens took it upon themselves to get involved in a highly technical, complex matter, and chose to say this isn’t for us. And their [local] representatives listened, and did some good things to pass protections for their citizens,” Droz said.

However, he said, Carteret County “already had one of the toughest laws in the state to begin with,” and other counties may not have the legal tools letting them block wind farms if locals oppose them.

“I guess the state legislation may give some protection to those entities who maybe have not already looked at enacting their own ordinances,” Overman said. About 15 counties have wind energy ordinances, he said.

“We can’t prohibit wind energy facilities, but we can regulate them,” Overman said. “I think in the future, yes, we as counties and municipalities do have the ability to enact zoning ordinances.”

The Town of Newport on Feb. 17 adopted a comprehensive ordinance regulating wind energy. It adds protections for citizens, local businesses, the military, and the environment. Part of the Mill Pond project would have been within town boundaries.

The Carteret County Board of Commissioners met in late February, after this issue went to press, to vote on county Planning Board recommendations to toughen the county’s ordinance. The revisions stem from citizen input at a recent joint public meeting of the planning board and commissioners during which between 60 and 70 people spoke.

Overman said the commissioners “have been very protective of the air space that is necessary for [Marine Corps Air Station] Cherry Point to carry out its mission,” and don’t want tall turbines that would interfere with its military operations.

The Marine Corps air station is the county’s largest employer, even though it is in Craven County. It has a reported $2 billion direct economic impact on a four-county area.

“One of the trains of thought is that if things are occurring in the communities around the base that would encroach on the base’s function, some of those bases might be the first ones to be considered for doing away with in a BRAC,” Overman said.

The Base Closure and Realignment and Commission periodically reviews military installations and decides if they are worth keeping open.

“We feel like the environment can be protected with 484, and we also feel like affected communities will have a say, so DENR does not have any recommendations for you at this time in the short session for any changes in the bill. We feel like the bill is adequate,” Gillespie said.

Droz isn’t as confident the new law protects military bases. He believes the Obama administration favors renewable energy policy over military policy when they conflict. For example, he said, the only reason a Department of Defense permit can be denied to a renewable developer is “if the project is a substantial, unmitigatable threat to national security.”

Operational readiness is “not their purview. That is not an allowable reason to turn it down,” he said, even though Mill Pond was directly in the Cherry Point flight path.

Wind energy projects have been documented to cause “an amazingly wide range of health problems,” mostly from noise, Droz said. He said they range from sleep disturbance and cardiovascular impacts to headaches and vomiting. He lists dozens of studies related to wind energy on his Web site http://www.wiseenergy.org/.

H.B. 484 calls for health studies to be done, but doesn’t specify the type. It allows the developer to determine the scope of studies and select the firm to do them. Nor does the law authorize the state to kill a project that fails a health study.

Dan Way is an associate editor of Carolina Journal.