College students are returning to campus amid delta variant fear spikes, restrictions, and, now, some University of North Carolina faculty pushing for a return to remote instruction. But how does a return to campus affect students psychologically?

College campuses are full of uncertainty in 2021. N.C. colleges’ 2020 attempt to launch into a traditional fall semester devolved into a panicked retreat toward quarantine and virtual-only classes following spikes in cases among students. This year’s return to campus coincides with delta variant spikes that bring about a sense of deja vu.

Will classes go all virtual, again? Will my internship get canceled, again? Sports? Socializing? Is this the new normal for the “college experience”?

“It’s a time of considerable uncertainty, and we know that uncertainty, for a lot of people, leads to worry,” says Professor Bethany Teachman, director of clinical training in the department of psychology at the University of Virginia.

In an interview with Carolina Journal, Teachman, a licensed clinical psychologist with more than two decades of experience studying how people think differently when they are anxious, suggested the onslaught of new stresses, from delta fears to elevated uncertainty, brings much anxiety.

“I think for people who are young adults trying to understand what’s happening right now and figure out what this means for their future and the plans they had made is particularly challenging. Because it’s a time for new students who are coming on campus who may be thinking this is going to be the first time that they live away from home, for example, and yet they’re doing it under these very uncertain conditions.

Rosas, a senior business major with a focus in finance who grew up in Fayetteville, has bridged the divide between a pre- and post-COVID college experience.

“My first two years were good, doing the normal things, going to class and the events and all the socializing that’s normal when you get to college,” he says. “Now, it’s more like everybody just does their own thing, heads back to their dorm or room. People aren’t really socializing as much, maybe more virtually. All the restrictions: It’s kind of a mood-killer.”

Rosas feels for the underclassmen who haven’t or won’t experience that first leap into traditional campus life, while also acknowledging that some simply may not know what they’re missing, as they’ve become familiar with the COVID campus life.

“On the one hand, people have already dealt with this already,” says Teachman. “They’ve already kind of dealt with, well what does it mean to do school remotely if we need to do something like that, what will the implications of that be like, how will I navigate it, what will it feel like? We have a framework and a script already in place that will be helpful and that reduces some of our anxiety because it takes away some of the unknowns tied to it.”

Teachman warns that the flipside is that many students (and faculty) coming back this year are completely drained, having been on guard and adjusting to disruption for 18 months now.

“[M]ost of us are going into this year depleted, in the sense of, we’ve been kind of in a stress mode for a really long time. It may have felt like a brief respite over the summer when things were normal before the delta variant really escalated. But for a lot of people, it really feels like the stress and anxiety has been going on since the pandemic started in March of 2020. So, it’s been a year and a half of feeling like we’re under stress, so the result is we’re depleted, our resources are low … so it makes even small stressors bigger when we’re coming at them without our full capacity and full resources fully recharged.”

Normal stresses for seniors, such as when, where, and how they might get a job they actually want, have now become more acute as COVID reactions and restrictions make networking and experiential opportunities that much more uncertain.

Upperclass business majors often use such opportunities to secure internships in their field, engage in projects that boost their appeal to companies, and form bonds among classmates that can lead to future business ventures. That’s all threatened, to one degree or another, when pandemic panic sets in.

As a senior, it’s the uncertainty of post-graduation opportunities that most worries Rosas. Last year he and his friends had internship opportunities canceled due to the pandemic. Now, with the delta variant raising the same sense of panic, and the restrictions and mandates escalating, he worries such opportunities will get disrupted again.

“This is how we get jobs,” he says. “Internship opportunities with companies that might turn into jobs after graduation, or serve as experience to get jobs; if those opportunities aren’t there, it can really make things much more difficult.”

That’s where the uncertainty arc lengthens, and the long-term effects of pandemic-era policies begin to manifest in the minds of students and parents.

“I think we’re going to see a lot of long-term effects from this time on people,” laments Teachman. “Those who have lost some educational opportunities, that’s expected to have pretty considerable downstream effects if there aren’t opportunities to really rectify those losses.” 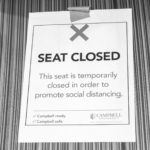 Teachman referenced data suggesting young people have had a particularly difficult time emotionally during the pandemic, relative to older adults. Even though young people are resilient in many ways, she says, they’re still developing emotional regulation skills, and there are particular pressures during this time in their lives to have those social connections to grow in and out of the classroom.

Already, with mask mandates, vaccine pressures, other restrictions, the social aspects of college life have already been blunted in a major way. What used to be time-honored traditions, like students rushing Franklin Street in Chapel Hill after a big win, morphed into social distancing infractions that risked a student’s expulsion from school.

Now, petitions to go fully remote for four to six weeks are circulating among faculty at UNC, looming over students who just returned to campus with hopes of starting the fall semester as close to “normal” as one could expect in 2021.

As faculty members lobby to avoid returning to physical classrooms, UNC-Chapel Hill leaders have announced that 87% of students have attested to being fully vaccinated against COVID-19. Others face twice-weekly testing starting Monday, Aug. 23.

Ultimately, the damaging effects of decisions such as that to cancel in-person classes or restricting gatherings has a lot to do with how the decisions and information are communicated, according to Baruch Fischhoff, professor in the Department of Engineering and Public Policy and the Institute for Politics and Strategy at Carnegie Mellon University in Pittsburgh.

“As much respect as I have for public health people who work really hard, are really dedicated, and catch an awful lot of heat in the situation we find ourselves in,” says Fischoff, “they’re not making it any easier on themselves by doing such a poor job of communicating.”

Specializing in risk perception, risk communication, health decisions (including infectious diseases), and public policy, Fischoff is a member of the National Academy of Sciences and the National Academy of Medicine. He has offered advice for clearer communication from the likes of the CDC, down to college campuses, confident that people can make solid judgment calls if they have solid information.

That’s a feeling that’s been with many younger and older adults on and off for 18 months now, as official guidance is issued as ironclad, only to be revised days later, and again weeks after that.

“You have lots of well-meaning public health officials and scientists, UNC has a fantastic school of public health, people trying to fill in, but they’re all doing it in somewhat different ways. We just have this glaring hole in our system that complicates life for everybody, and I don’t see it getting any better, honestly.

“Everybody needs a common picture, even if they may disagree with the policy. They may want to take different risks. They do need authoritative facts. And then we said we need an entirely separate chapter on health promotion: Here’s what authorities think they should do and try to convince them to do it.”

For students and staff on college campuses, that common picture is critical to building trust, Fischoff says. In its absence, he describes the varied and conflicting communications strategies as “amateur hour” and “truly maddening” from the perspective of someone who specializes in risk communication.

“[I have] lots of respect for the people who are doing this, but it’s really late in the day that they’re playing catch up. And those people who are in the field are undercut every week or two by some clumsy communication, whether it’s the clumsy handling of the Johnson & Johnson vaccine, the blood clot issue, or what have you.

“With the delta variant, [the authorities] knew months ago that this was out there and that it could be nasty, but they also knew any recommendations they made were contingent on the evolution of things in the field, how many people were vaccinated, and where the virus was going. So why not make it clear that the recommendations are conditional? So that people don’t think you’ve hidden something from them, you’re manipulating them, that you’ve been caught blindsided. It’s just maddening.”

In many ways, Fischoff thinks that the ship has sailed, but a focus on doing a better job of giving people the real authoritative information that they deserve remains the best way of improving the mood on campus, in America, for everyone.

Without the trust that comes from clear communication strategies, students like Rosas and others are left in a lurch of uncertainty that adds to the already mounting psychological load that faces college students anxious about the next steps.

Teachman suggests the constant threat of what might come next with COVID is exacerbated by a host of social and political issues that permeate life in 2021, creating extraordinary and sometimes inescapable pressures on younger adults.

“It also means you don’t get breaks from it,” Teachman said. “So when you’re dealing with one stressor, hopefully, there are times when you can kind of turn that off and feel normal doing other things. Whereas, because what we have is a sort of layering of political stressors, we have this kind of cascade happening for people, it really does touch most aspects of life, and that has made it hard for people to kind of turn the threat-monitoring off. So, you are constantly vigilant in that sense for the next threat, the next challenge, the next piece of bad news, the next thing you need to react to, and that’s overwhelming.”

The activities so important to releasing such pressures are often the social engagements most at risk of restriction on a COVID campus.

“It’s just not the same,” says Rosas, alluding to social life these days on campus at N.C. State.