As critics of North Carolina’s new election maps take their case to the state Supreme Court, lawyers on both sides of the case are taking aim at justices they want to drop out of the case.

Along with official notices of appeal, one document filed in the state’s highest court within the past day was dubbed a “renewed motion” for Republican Justice Phil Berger Jr.’s disqualification. It’s filed on behalf of plaintiffs in a case dubbed Harper v. Hall.

“Marc Elias and other counsel in Harper are being paid by funds from the National Democratic Redistricting Committee (“NDRC”),” according to the defendants’ motion. “This Committee, led by former United States Attorney General Eric Holder, raises money for redistricting litigation. One of their target states is North Carolina – and it has been since 2017.” 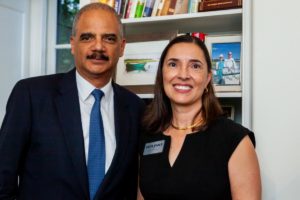 “In 2018, Justice Earls received outsized donations from the North Carolina Democratic Party just after the Party received nearly identical amounts from the NDRC,” the motion continued. “Justice Earls’ former firm, the Southern Coalition for Social Justice — a nonprofit institution Justice Earls helped establish in 2007 and served as its Executive Director until she resigned to run for her current seat — is also counsel of record for the intervenors Common Cause.”

“Justice Earls has spoken publicly about the importance of impartiality,” the motion continued. “But because of her record of public advocacy against the
Legislative Defendants, any reasonable observer would think she could not be anything but partial to the plaintiffs in this case.”

“Accordingly, for this reason and because it appears that the NDRC — an organization of singular focus on redistricting, in particular redistricting litigation — helped elect her to the bench and is now funding the litigation that is before her and is being bolstered by the advocacy of her long-time colleague, she should recuse from further consideration of these matters.”

On the other side of the case, Harper plaintiffs explain why they are targeting Berger for removal.

“Here, Justice Berger, Jr.’s father, Senator Berger, is not just a named defendant in this case — which alone would be reason enough for mandatory
disqualification,” according to the motion. “Rather, this case directly implicates Senator Berger’s own personal ‘interest[s]’ as an individual legislator, a legislative leader, and a candidate ‘that could be substantially affected by the outcome of the proceeding,’ making recusal independently mandatory under Canon 3C(1).”

Sen. Phil Berger serves as the top elected officer in the state Senate. In that role, he is a named defendant in redistricting lawsuits, including the Harper case. He is also a likely candidate for re-election in Senate District 26.

“To redress this unconstitutional packing and cracking in the enacted Senate
plan, the Harper Plaintiffs seek to have the Senate districts in the Guilford-Rockingham cluster, including District 26, redrawn in a manner that eliminates the unfair advantage to Republicans — and, more specifically, the unfair advantage to Justice Berger’s father,” the motion continued.

“[I]f the Harper Plaintiffs prevail and the maps are redrawn to eliminate the
unconstitutional packing and cracking — the resulting Senate map will be less likely to protect Republican control of the Senate over the next decade,” according to election map challengers. “Plaintiffs’ claims and requested remedy thus place the legislative power of Senator Berger and other Senate leaders squarely at issue.”

“Senator Berger is therefore no mere official-capacity defendant in this case.
Independent of his status as a defendant, his personal ‘interest[s]’ as an elected official and a Republican leader in the Senate ‘could be substantially affected by the outcome of the proceeding’ — making recusal mandatory” for his son.

Plaintiffs in Harper v. Hall first asked for Berger’s disqualification on Dec. 7. Sixteen days later, the Supreme Court issued a general order on recusal of justices. It explained that individual justices will continue to retain full decision-making authority over whether to take part in a particular case. A justice can turn that decision over to a vote of his colleagues but faces no obligation to do so.

Berger issued an order in a separate case Friday. The order explained that he would continue to take part in a case challenging two state constitutional amendments. As in the redistricting case, plaintiffs had challenged Berger’s participation in the amendments case because of his father’s role as state Senate leader.

Earlier in the redistricting dispute, legislative defendants asked for Justice Sam “Jimmy” Ervin IV’s recusal. Ervin, a Democrat, is the only justice seeking re-election to the court this year. Legislative leaders argue that Ervin’s decisions about candidate filing and election timelines in the redistricting case could affect his own election.

Democrats hold a 4-3 majority on the state Supreme Court. Recusal from Berger, Earls, or Ervin could affect the case’s partisan balance. No justice has indicated an interest in stepping away from the redistricting case.