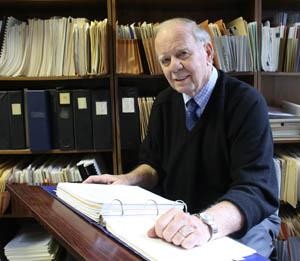 RALEIGH — A defamation lawsuit filed by four Raleigh attorneys against Attorney General Roy Cooper and his 2000 campaign committee finally may go to trial in December. The plaintiffs allege that Cooper and his committee ran a political ad that was defamatory and constituted an unfair and deceptive trade practice, and that they participated in a conspiracy to violate a North Carolina law prohibiting false ads during election campaigns.

The 13-year old lawsuit is scheduled to go to trial at about the same time that Cooper, a Democrat, seems poised to launch a bid in the 2016 race for governor.

One week before the 2000 election, Cooper’s campaign started running a television ad that read: “I’m Roy Cooper, candidate for attorney general, and I sponsored this ad. Dan Boyce: His law firm sued the state, charging $28,000 an hour in lawyer fees to the taxpayers. The judge said it shocks the conscience. Dan Boyce’s law firm wanted more than a police officer’s salary for each hour’s work. Dan Boyce — wrong for Attorney General.”

The ad contained statements that were not true. When the advertisement was running, Dan Boyce, his father Gene, Philip Isley, and Laura Isley were partners at the Boyce & Isley law firm in Raleigh. Dan Boyce did not work on the Smith case, the lawsuit the ad referenced. The Boyce & Isley law firm had not been created. Gene Boyce and attorneys from the Womble Carlyle Sandridge & Rice law firm filed the Smith lawsuit.

Gene Boyce was not the candidate, and he did not charge $28,000 an hour to the taxpayers in the Smith case. Legal fees in class-action lawsuits are set by the judge, and the final payment to the attorneys was much lower than the amount alleged in the ad.

Cooper continued running ads making those statements after Boyce & Isley formally requested that they be pulled and retracted, Boyce’s lawsuit says. On the second day the ad ran, Boyce & Isley notified the Cooper Committee in writing about the statements in the ad and requested that he retract them immediately. Cooper ignored the request and continued to run the ads. Gene Boyce said that Cooper’s ad ran at least three times a day for seven days on more than 20 television stations.

The four attorneys filed their lawsuit the day before the election, naming Cooper, the Cooper (political) Committee, and campaign aide Julia White as defendants. In three court filings in 2003 and 2008, Cooper stated, “The political advertisement is true.”

Neither Cooper nor his attorney, Jim Phillips, responded to requests for comment from Carolina Journal.

Gene Boyce has assumed the lead role in the lawsuit against Cooper. “That ad was false and the Cooper team knew it,” Boyce told CJ. “They implied we were crooks. I want my name cleared. I did not cheat my clients. The public record has shown the statements in the ad to be libelous. My main purpose in pursuing this is to get a decision that the ad is false. I want the record to be clear.”

Boyce said that he believes the Cooper team has no further issues to appeal. N.C. Supreme Court Chief Justice Sarah Parker has designated Superior Court Judge Osmond Smith of Yanceyville to preside. Boyce has asked for a jury trial to begin Dec. 2 in Wake County.

Six days before the 2000 election, Dan Boyce filed a complaint about the ad with the State Board of Elections, since the dispute involved a state election law.

Dan Boyce’s complaint alleged that the ad violated section 163-274(8) of the North Carolina General Statutes, which states that it is unlawful “For any person to publish or cause to be circulated derogatory reports with reference to any candidate in any primary or election, knowing such report to be false or in reckless disregard of its truth or falsity, when such report is calculated or intended to affect the chances of such candidate for nomination or election.”

The Elections Board dismissed the complaint in December 2000. Gene Boyce told CJ he later discovered that board chairman Larry Leake, a Democrat, failed to reveal that he had donated $4,000 to the Cooper political committee for that election cycle, including $1,200 on Oct. 21, 2000 — days before the ads ran. Leake also sponsored and paid for a fundraising event for Cooper, and did not recuse himself from the board’s review of the complaint.

Gene Boyce asked the other four elections board members if Leake had disclosed his financial support for Cooper. Each said Leake had not.

The Boyce lawsuit claims that Cooper deliberately made false statements in the ad that were defamatory in that they tended to “disparage Boyce & Isley, PLLC and its member attorneys’ professional reputation and honesty in billing clients, and states that they engage in unethical conduct.”

Through depositions and document requests, the Boyce team obtained records from Cooper’s 2000 campaign organization. Some of those items were included in the various court filings and became part of the public record.

Among those documents was a typed script of the ad in question. In handwriting, someone had modified parts of the script, including the addition of the “$28,000 per hour” phrase. Gene Boyce said depositions revealed that the handwriting is Cooper’s. (See document here.)

A Wake County judge dismissed the initial complaint in April 2001 for “failure to state a claim upon which relief can be granted.” Gene Boyce did not give up.

In September 2002, the North Carolina Court of Appeals issued a ruling on Boyce’s appeal of the initial hearing. The court concluded that the “plaintiff’s complaint presented a sufficient claim upon which relief could be granted for defamation and unfair and deceptive trade practices,” and “that the trial court erred in dismissing plaintiffs’ complaint.”

The case has been before state and federal appellate courts on eight occasions. In May 2012, the U.S. Supreme Court — for a second time — denied Cooper’s request to review the matter and end the case in his favor. Each appellate court decision has moved the plaintiffs toward their goal of a jury trial.

Gene Boyce has been practicing law since 1956. He served as assistant chief counsel to the Senate Watergate Committee, working with U.S. Sen. Sam Ervin, D-N.C., on the investigation of President Nixon’s 1972 presidential campaign.

Cooper’s ad referenced the settlement in a class-action lawsuit known as the Smith case, and Gene Boyce — working in conjunction with attorneys from Womble Carlyle Sandridge & Rice — represented plaintiffs in that case. The Smith lawsuit challenged a North Carolina tax law that taxed shares of stock held in North Carolina companies at a lower rate than shares of stock in out-of-state companies.

The Smith case depended on the outcome of a related case called Fulton. In February 1996, the U.S. Supreme Court ruled in Fulton that North Carolina’s disparity in tax rates was unconstitutional, and it ordered the N.C. Supreme Court to devise a remedy that may include a refund.

The Fulton decision led the way for Gene Boyce and the other attorneys to prevail in the Smith case. The North Carolina Department of Revenue was ordered to issue refunds totaling $120 million in principal plus $26 million in interest to 172,000 taxpayers. In June 1997, the attorneys requested a fee of 16 percent of the total settlement that would have amounted to $23.3 million. A percentage fee is often customary in class-action cases.

In justification of the fee, the attorneys noted that they were “willing to take the risk and obligate themselves to take the time, incur the expense, and assume the responsibility and personal exposure of multiple and complex litigation against the State of North Carolina.”

In reaction to the fee request, trial court Judge Howard Manning said in court that, “Class Counsel’s request for $23.3 million is so excessive and unreasonable that it shocks the conscience of the court.” Manning calculated that fee would have amounted to $28,000 per hour and stated such in his order on the fee.

Manning ultimately devised a fee structure that awarded the attorneys $1.8 million. Dan Boyce was not one of those attorneys.