Gov. Roy Cooper insisted $57.8 million from energy companies building the Atlantic Coast Pipeline was a voluntary contribution, but said at a news conference he doesn’t know whose idea it was originally to seek the money he planned to distribute.

During a 20-minute meeting with reporters Wednesday, Feb. 14, Cooper accused the General Assembly of hijacking the escrow fund he planned to create. In doing so, lawmakers  risked losing the windfall he intended to use for environmental mitigation, renewable energy, and economic development projects. He also attacked GOP lawmakers for using a needed class-size reduction funding measure as a political vehicle to enact the pipeline provision alongside a plan merging the state elections and ethics boards.

The governor failed to mention any constitutional authority he has to claim control over the fund without subjecting it to the legislative appropriations process. Nor did he clarify who originated the idea for a mitigation fund developed separately from the permitting process for the pipeline.

Cooper denied he had any conflicts of interest that were raised in the complaint.

“This permit [for the Atlantic Coast Pipeline] rises and falls on its own,” and was evaluated and issued separately from the $57.8 million escrow fund, Cooper said. 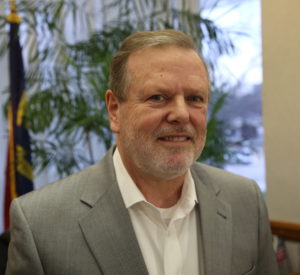 “Any funds that come into the state are supposed to be appropriated by an act of the General Assembly. That’s what the state constitution says,” Senate leader Phil Berger, R-Rockingham, said in a news conference immediately following Cooper’s.

“It’s clear he got his hand caught in the cookie jar, and he’s doing everything he can to twist and turn, and come up with an explanation that he hopes will stick,” Berger said.

Cooper said he would allow House Bill 90 to become law without his signature. Berger said that implied a problem.

“[Cooper] has a clear conflict of interest with reference to this particular piece of legislation” or he would have either signed the bill or vetoed it, Berger said. The legislation was sent to Cooper on Tuesday.

“The legislature has only partly fixed a problem they created,” Cooper said. The education reforms are not a cause for celebration, he said. “They’re just a sigh of relief.”

He criticized lawmakers because they did not include any school construction funds or more money for teachers, especially in poor rural districts, to help them meet the class size reduction mandate. H.B. 90 gives schools four years to meet smaller class mandates instead of implementing them next school year.

“The rest of the bill’s bad provisions are political attacks and power grabs. Period,” Cooper said.

“The legislature has imperiled an agreement with the Atlantic Coast Pipeline to invest in economic development and environmental protections in eastern North Carolina,” Cooper said. “They raided the money that was supposed to improve the economy and bring jobs, and lessen the environmental impact for the very communities that were affected.”

He bristled at a component of H.B. 90 reviving a legislative plan to reformulate the Bipartisan State Board of Elections and Ethics Enforcement. The state Supreme Court twice has rejected legislation merging the two entities.

“I don’t know what’s going to happen to the money,” Cooper said, repeating that the fund was now at risk.

“This was not a binding agreement,” he said. “They [pipeline operators] agreed to what was in the Memorandum of Understanding. It was a good thing for them because if gas lines are extended, that’s good for economic development, that gets them more customers, it buys good will to eastern North Carolina.”

He said the fund that he had envisioned was for economic development and job creation. It would have paid to construct local spur lines off the main natural gas pipeline running near the Interstate 95 corridor in eight North Carolina counties, ending near Lumberton.

Yet when asked twice by Carolina Journal who proposed the massive escrow fund, Cooper did not specify.

“I really don’t know,” he said regarding the originator  of the fund.

Berger said Cooper’s fund either smacks of pay-to-play politics to get a permit, or steers voluntary money into a slush fund he would control. Either scenario is wrong, he said.

Berger said he thinks the energy companies building the pipeline wouldn’t withdraw the money. He said he doesn’t know who first advanced the idea for Cooper to create the fund.