Gov. Roy Cooper and his staff laid out a comprehensive plan to sell the public on the approval of the Atlantic Coast Pipeline and a $57.8 million discretionary fund connected to the project, documents show.

The fund was controversial from its late January 2018 announcement. Cooper would have controlled the fund without legislative oversight, unlike other money that flows into state accounts. The General Assembly has convened a special committee to investigate the pipeline permitting process and the fund. The committee has hired outside investigators to review the process.

Cooper’s public relations plan came together Jan. 18, 2018, the day after the governor discussed pipeline issues with Duke Energy CEO Lynn Good, The Insider reported. Cooper senior adviser Ken Eudy released an internal 16-step, eight-day messaging timeline for announcing the pipeline permit approval; the $57.8 million discretionary payment from the pipeline owner to Cooper; and the settlement of a dispute between solar companies and Duke Energy, a partner in the ACP.

Records suggest Eudy’s task was to make a political case for the pipeline and the fund. Eudy’s communications mentioned bringing in the N.C. Democratic Party and other Democrats as part of the plan. Eudy assigned some tasks to Morgan Jackson, Cooper’s campaign manager and political strategist. Jackson didn’t work in the governor’s office or for state government. Eudy also set the timetable for DEQ to issue an environmental permit, the records suggest.

The campaign was tightly coordinated. The governor’s staff met Jan. 23, 2018, with “Solar developers to nail down messaging,” based on Eudy’s timeline. Part of the messaging was a press release issued Jan. 29 from the N.C. Clean Energy Business Alliance. It praised Cooper for negotiating a settlement between Duke Energy and renewable energy companies over the purchase price to bring renewable energy to the power grid.

Text messages released in a public-records request by WRAL show Eudy, at 9:34 a.m. Jan. 29, asking solar-industry lobbyist Alex Miller to issue the press release and add a person (whose name was redacted from the text) to the distribution list.

Eudy sent the timeline (below) to Cooper’s Communications Director Sadie Weiner, Deputy Chief of Staff Julia White, and political adviser Jackson. Eudy refers to the timeline as “ACP Tick Tock” and sent it from a Gmail account, not his state government account.

Acronyms and other terms are explained below the email.

• PA is the programmatic agreement between State Historic Preservation Officer Kevin Cherry and the Federal Energy Regulatory Commission. The agreement is a plan for dealing with historic artifacts that might be uncovered during the ACP construction. Cherry had signed the agreement on Jan. 12. Eudy was unaware of the agreement, and emails suggest he directed Cherry to rescind his signature. On Jan. 14 Cherry informed FERC officials he had signed in error. Eudy’s plan called for resending Cherry’s signature on Jan. 18, the same day he released the messaging plan.

• The stakeholders are organizations that opposed or supported the pipeline.

• The 401 is a water-quality permit that was necessary before construction on the pipeline could start.

• “Commerce” is the N.C. Department of Commerce. Economic developers overwhelmingly supported construction of the ACP.

• The solar developers include Strata Solar and other companies that had solar projects on hold, or in the “queue,” waiting to resolve a dispute with Duke Energy over connection details.

• The carbon-offsetting measures appear to be measures contained in the $57.8 million agreement between the ACP and the governor.

In a Jan. 29 text exchange, Eudy urged solar-industry lobbyist Miller to publish the press release and add an unidentified person to the distribution list. Jamal Little of Cooper’s press office shared the press release with WRAL’s Travis Fain about two hours after it was released. 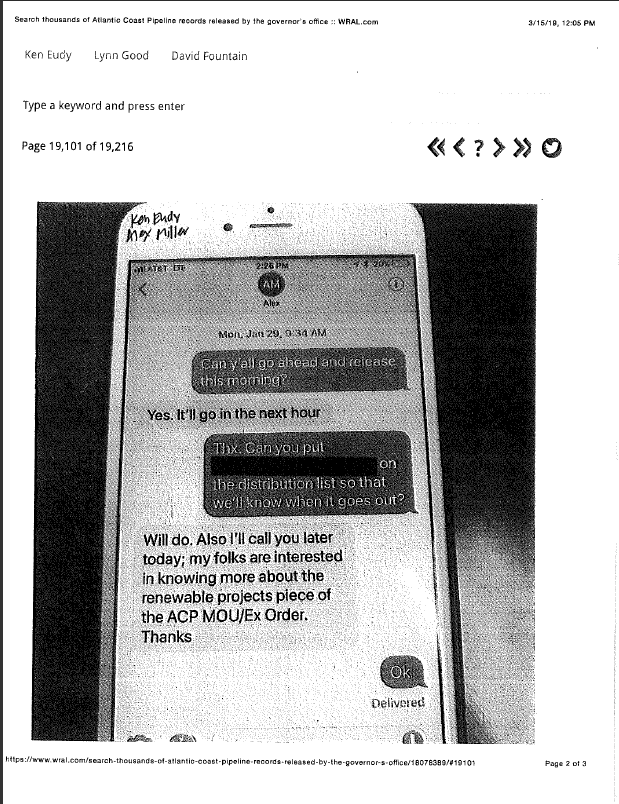 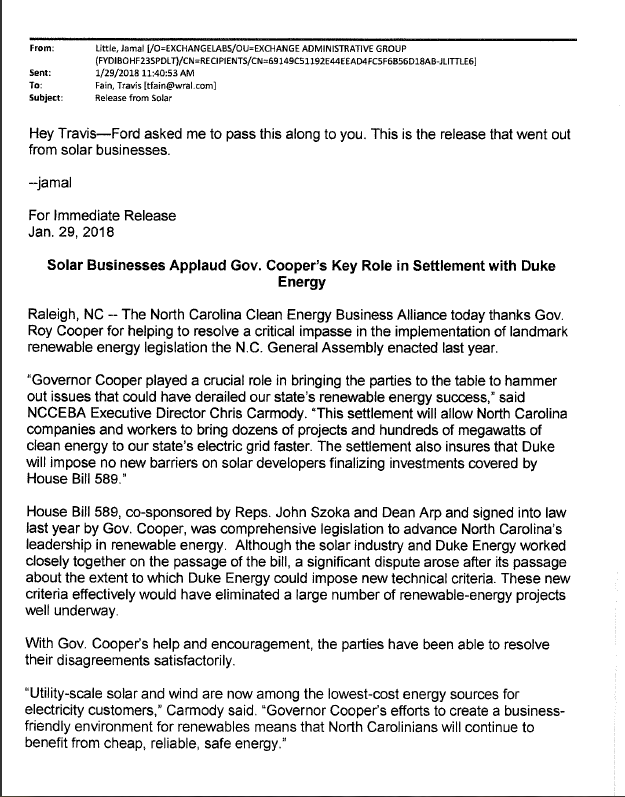 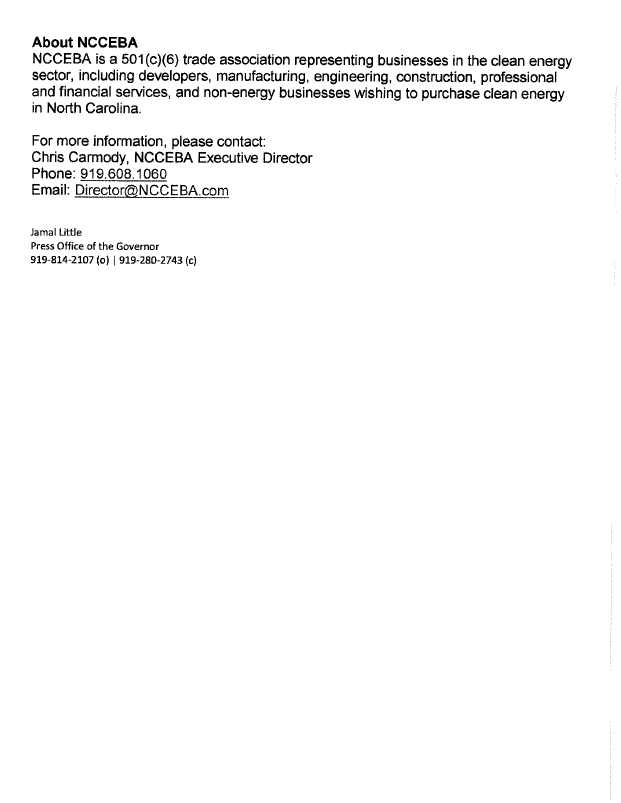 CJ contacted Cooper’s office to ask if anyone on the governor’s staff was involved in writing or reviewing the press release. At press time, CJ hadn’t received a response.