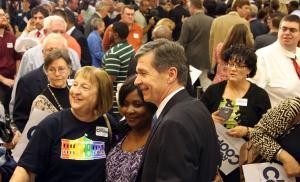 Casting himself as a champion of traditional North Carolina values under assault by a wayward Republican governor and General Assembly, Democratic Attorney General Roy Cooper announced Monday he is running for governor against GOP incumbent Pat McCrory “to set a new direction.”

With former Gov. Jim Hunt, often billed as North Carolina’s “education governor,” looking on, Cooper, the state’s attorney general since 2001, repeatedly claimed public education and the university system are suffering under the Republicans, although the General Assembly has increased education spending by $780 million over the past two years.

Cooper heralded his roots on a family farm where, he said, he chopped tobacco, raised hogs and cattle, and was imbued with family and Christian values by his attorney father and teacher mother who taught him the value of a dollar and a good education.

The former state legislator characterized his four terms as attorney general as a watchdog for the common man.

“We have taken on the mighty and made them do right, like the utilities, like banks, car manufacturers, pharmaceutical companies, and telemarketers,” Cooper said.

“We’ve taken on the [Environmental Protection Agency], and out-of-state polluters, working on clean smokestacks, stopping companies that cheat, and bringing back hundreds of millions of dollars to help North Carolina,” he said.

“I have fought with you because I haven’t forgotten where I came from,” Cooper said.

At an event held just before Cooper’s announcement, the state Republican Party went after the attorney general’s record. “From higher taxes, to bigger government, to unchecked corruption, Roy Cooper represents the worst of the broken system and the broken policies of the past,” said Dallas Woodhouse, the NCGOP’s executive director. Mentioning a new anti-Cooper website the Republican Party launched Monday, Woodhouse added, “Roy Cooper will take us back to the future.”

“After spending nearly 30 years in government, Democrat Roy Cooper has nothing to show for it but a consistent record of supporting Obamacare, higher taxes, more spending and other anti-business, out-of-touch policies that put North Carolina at a disadvantage for decades,” said a statement issued by the national organization.

“When given the chance to stand up for Tar Heels as attorney general, Cooper failed to do his job and instead chose to align himself with Washington, D.C., liberals. Roy Cooper’s North Carolina would be closed for business, taking the state backwards and ensure the end of job growth,” the statement said.

Most of Cooper’s 15-minute announcement, interrupted by a 45 seconds of sustained applause when he said he was throwing his hat in the ring, involved education and the economy.

“It’s time for a governor who believes we should measure our state by the success of regular working folks,” Cooper said. “Today wages are stagnant. The cost of college is skyrocketing. We are not attracting enough high-paying jobs, and our schools are starved for resources.”

Although state data show that in recent years, North Carolina has hired more teachers from other states than it has lost teachers who have moved from North Carolina, Cooper said the state’s best and brightest teachers are leaving for better pay and more respect elsewhere.

“The truth is Governor McCrory has the wrong priorities for North Carolina, giving away the store to those at the top at the expense of the middle class and our schools. He won’t find a way to keep good teachers, but he finds a way to pass tax giveaways,” Cooper said.

“He won’t find a way to put more money in the pockets of working families, but he finds a way to take it out by expanding the sales tax” on services such as auto repairs, he said.

“We need to make education a priority again, a strong K-12 system that values our teachers and gives students the resources they need, higher education that’s affordable,” Cooper said. “You shouldn’t have to mortgage your future to experience success. And we need a community college system that is fast, and provides the best workforce training possible.”

That message resonated the enthusiastic audience packed in the auditorium of Nash Community College in Cooper’s Rocky Mount home town.

“The main thing I liked hearing was his huge focus on education,” said Kaylan Neaza of Fayetteville, a 23-year-old law school student who attended the event with three classmates who shared her assessment.

Funding for universities “has been awful,” Neaza said. “Just the fact that he’s going to be focusing on bringing our educational system back where it should be, and universities are going to be funded the way they should be is something I liked to hear as somebody who’s at UNC Chapel Hill right now.”

“The people that we’ve got up there now, and the people that’s been running on the Democrat and Republican side, are not doing this state any good at all as far as the educational process is concerned,” Burchette said. He opposes privatized education, “and that’s damn well what they’re trying to do, in my opinion.”

Cooper is “exactly what we need,” Sen. Floyd McKissick, D-Durham, said after Cooper’s speech. “He has great passion, great vision about going back and restoring North Carolina to the pinnacle it had within the South, restoring the tarnished image that we’ve suffered from in many recent years.”

“I think the future of North Carolina is looking up. We’ve got someone who’s proven that they care about this state, and they’ve put in the time, and they can be measured by their record and their effectiveness,” said House Minority Leader Larry Hall, D-Durham.

Although Ken Spaulding, a fellow Durham Democrat and lawyer, also is running for the Democratic nomination, Hall said that “doesn’t give me any pause. We want a strong campaign. I’m supporting Roy Cooper. I think he’s the best in North Carolina. But this is a Democratic system. People who have other ideas and want to offer themselves to service are certainly welcome to join the contest.”

According to midyear, semi-annual campaign filing reports, Cooper has raised more than McCrory and Spaulding. Cooper has $3,042,815 cash on hand, having raised $2.16 million from Jan. 1 through June 30.

The Right AOC on Point: Uncertainty about N.C. school plans could lead parents to alternatives