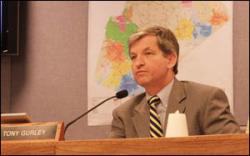 Tempers flared in Wake County Monday, when county commissioners met to consider nixing from their own health plan elective abortions, which are those deemed medically unnecessary. The meeting nearly deteriorated into a shouting match.

Commissioners delayed a vote that would have ratified an earlier decision by county administrators to limit the benefit plan to cover medically necessary abortions only. But the testiness of that meeting suggests that other communities may face heated discussions over a medical benefit state courts may have outlawed.

Publicly funded abortion has been a flash point at the national level, with pro-life lawmakers working to ensure Medicaid and a potential federal health insurance plan don’t cover the controversial procedure. But many leaders and residents are surprised that state and local taxpayer dollars already flow to it.

The state’s most populous urban centers — including the Triangle, Triad, and Charlotte-Mecklenburg area — cover abortions into the second trimester. Counties and municipalities in the west and east — such as Asheville, Wilmington, Buncombe County, and New Hanover County — also offer the benefits.

A handful of local governments have already buckled under pressure to remove elective abortion. House Minority Leader Paul “Skip” Stam, R-Wake, said the funding runs afoul of state law, and he’s willing to go to court to prove it.

Insurance giants CIGNA HealthCare and Blue Cross and Blue Shield provide many of the plans, which typically also offer other family planning services such as birth control and vasectomies.

Wake County has paid for about a dozen elective abortions since 1999, but county administrators changed the health insurance plan Wednesday to cover abortions only in cases of rape, incest, or when the mother’s life is endangered. Commissioners had a chance to ratify that decision at their meeting Monday, but opted to punt a final vote to a future meeting.

“In our case, we took the action because the research of the county attorney’s office said that our current practice was not legal based on the 1981 case that spending public funds for this purpose was not legal,” said County Manager David Cooke.

Commission Chairman Tony Gurley had added the item to the board’s consent agenda, where routine and noncontroversial matters go. Liberal commissioners, however, began to debate the item without first moving it to the regular agenda.

Commissioner Stan Norwalk criticized Stam for threatening a lawsuit, going so far as to give out the minority leader’s General Assembly phone number.

“If you want to talk about who is trying to get his values accepted by the entire community, that’s the number you should call and complain to,” Norwalk said.

Minutes afterward, Gurley called for a vote on the entire consent agenda, which contained five other non-controversial items. Passage failed on a 3-3-vote tie. But the issues, including elective abortion coverage, could be raised at a future meeting. Until then, the county manager’s decision apparently stands.

“The board could elect to include it [again], but they would be voting to do something that our county attorney has told us is illegal,” Gurley said in a telephone interview Friday. “We would be going out on a limb.”

Other local governments have taken up the issue, too. Town council members in Apex voted unanimously Jan. 19 to eliminate elective coverage. Cumberland County opted to do so administratively, with the change taking effect March 1. Guilford County hasn’t paid for the procedure in years.

Similar changes could be in store for Mecklenburg County. Officials are reviewing their policy — which covers both elective and nonelective procedures — in light of Wake County’s decision, according to Mecklenburg County Commissioner Bill James.

Forsyth County Manager Dudley Watts is seeking legal advice on the situation and plans to consult with county commissioners as well, reports the Winston-Salem Journal.

“It has become a hot and heavy subject,” Mark Browder, Forsyth’s health plan consultant, told the newspaper. “You are going to see all of the public-sector employers comply with the law and change their policies.”

Broader shifts are also in the works. On Thursday, a governing board of the N.C. League of Municipalities opted to nix elective abortion coverage from the sample medical plans it offers to the 522 municipal governments in its membership.

Employers will have the chance to opt-in, but the standard plan will only cover the procedure in cases of rape, incest, or when the mother’s life is endangered, said Ellis Hankins, the league’s executive director.

“Our board of trustees believes local governing bodies have local legislative discretion on this employee benefits issue, and they should determine it as they see fit. That’s why they made the change,” Hankins said.

Other local governments are less enthusiastic to tackle the controversy. Cary Mayor Harold Weinbrecht told The Cary News that abortion coverage shouldn’t be addressed by a city council.

Stam disagrees. He says a state Supreme Court case from 1981 that he litigated offers “persuasive” evidence that property tax revenue can’t be used to pay for elective abortions.

The state chapter of the American Civil Liberties Union published an analysis (PDF download) recently challenging the argument that Stam prohibits local abortion funding, but it stopped short of threatening to sue if local governments fail to offer the coverage.