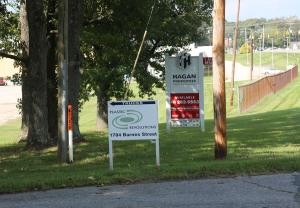 The handling of a $250,644 stimulus grant received by a company co-owned by Democratic U.S. Sen. Kay Hagan’s husband has been referred to the state auditor by the N.C. Department of Environment and Natural Resources for “further legal review,” according to documents obtained by Carolina Journal.

Findings of a DENR staff review (PDF download) of the grant note that JDC Manufacturing, a real-estate management company owned by Sen. Hagan’s husband, Greensboro attorney Chip Hagan, and his brothers John and David, contracted with another Hagan-owned company, Plastic Revolutions, to handle one phase of a project upgrading light fixtures and furnaces and installing solar panels at the JDC building — which leases space to Plastic Revolutions.

The documents also state that “further legal review is warranted.”

Moreover, the review notes significant activity by Kay and Chip’s son Tilden, who along with Chip co-founded SolarDyne/Green State Power, a solar company that documents show had a role in the project.

If so, these arrangements would appear to violate provisions in both state and federal law prohibiting self-dealing and conflicts of interest in the handling of the stimulus grants. DENR Secretary John Skvarla and Commerce Secretary Sharon Decker have asked State Auditor Beth Wood to investigate this and other stimulus-funded projects handled by the State Energy Office and the Weather Assistance Program, which were housed in the Commerce Department before moving to DENR in 2013.

The stimulus grants were administered during the administration of former Democratic Gov. Bev Perdue.

The review also offers another contradiction of repeated statements by the Hagan campaign and spokesmen operating on behalf of the senator that there was nothing improper about the handling of the stimulus grant and that no family members benefited or profited from the tax-funded payments to the Hagan family’s businesses.

The documents include a copy of the staff review of the JDC grant along with a letter, dated Oct. 21, from Skvarla and Decker to Wood asking for a “thorough review and audit” of all the energy and weatherization stimulus grants. The stimulus bill became law in 2009, and the state administered roughly $812 million in energy grants, with $76 million handled by the energy office and $132 million by the Weatherization Assistance Program.

The DENR review states that JDC applied for the grant in 2010 and that Tilden Hagan “approved a JDC purchase order to Solar Electric Distributor, and was also listed as a staff representative of JDC on a Site Visit and Monitoring Report.”

In addition, JDC “represented [to state officials] that competitive bids were sought” for the project; however, the review reports competitive bids only for the lighting and heating portions of the project. “JDC subgranted with Plastic Revolutions for the solar project,” the review states, and according to an impact report for the grant, Plastic Revolutions’ role was to “Coordinate and assist JDC with the installation of PV solar panels, and with the interconnect to Duke Energy.”

The review suggests these actions may pose legal problems for the Hagan companies, based on “several provisions regarding self-dealing” in the grant agreement. One notes that “the state requires compliance with self-dealing rules for grantees and their contractors and subcontractors. These rules require, among other things, that no one with direct lineal relations may receive incentive payment. For example, the mother, father, brother, sister, son or daughter of a contractor working in this program cannot receive awards, contracts, and subcontracts” (emphasis in original).

In addition, the review continues:

No employee, officer, or agent shall participate in the selection, award, or administration of a contract supported by federal funds if a real or apparent conflict of interest would be involved. Such a conflict would arise when the employee, officer, or agent, any member of his or her immediate family, his or her partner, or an organization which employs or is about to employ any of the parties indicated herein, has a financial or other interest in the firm selected for an award.

The DENR document then states, “A review of the grant records indicates a number of transactions that appear to be executed between JDC Manufacturing, LLC, and companies controlled or managed by members of the same family.” It lists JDC contracting with “SolarDyne, LLC, for the solar phase of the project” even though SolarDyne was “not the low bidder on the project.”

SolarDyne was founded by Chip and Tilden Hagan in 2011. Chip changed the company’s name to Green State Power in 2012, and its current managers are listed as Chip Hagan, Tilden Hagan, and William Stewart III, who married Chip’s daughter in 2011. Tilden and Stewart received direct payments of at least $12,785 for work on the project at various times.

CJ has reviewed the public records of the JDC stimulus file at the State Energy Project and reported extensively on the disposition of the grant by JDC, Plastic Revolutions, and SolarDyne/Green State. On its website, Green State Power lists the JDC project as one of its projects.

JDC received an additional $50,000 grant from the U.S. Department of Agriculture to build a second phase of the solar project at the JDC facility. The grant file turned over to CJ was incomplete, and Randall Gore, the head of the state’s USDA Rural Development Office, said the missing documents were “proprietary.” Those documents may have included invoices, work orders, or contracts. Hagan recommended Gore for his USDA position in 2009. President Obama then nominated Gore, and the Senate confirmed Gore’s appointment.