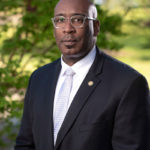 Terrance Merriweather, deputy commissioner of the N.C. Alcoholic Beverage Control Commission, will oversee daily operations of the agency until the governor appoints a new chairman.

Guy told The Associated Press he was stressed.

“When you can’t sleep at night and you’re worrying about things that you can’t control, it’s time to readjust,” Guy told the AP, adding later: “I’m done.”

Guy’s resignation came amid liquor supply shortages, in part because of problems with the global supply chain and also because of issues with liquor warehouse operator, LB&B Associates. The ABC Commission in March voted unanimously to recommend that the state award a 10-year contract for warehouse services to LB&B, the target of an audit in 2018 that has, over previous years, cost the state about $13.5 million. The agreement, the ABC says, includes a requirement of nearly error-free and on-time deliveries as well as increased delivery frequency to the state’s 171 local ABC boards.

As deputy commissioner, Merriweather oversees the functions of the commission’s legal, programming, special services, human resources, and operations sections, his bio on the ABC website says. Merriweather served as the deputy director of policy since 2018, a role in which he oversaw the permit, audit/investigation, and legal sections of the ABC commission, including as law enforcement liaison.