Differences between friends, foes of offshore drilling on display

Few minds changed during rallies, informational sessions for and against seismic testing and offshore drilling

The length of a fishing pier separated opposing groups making waves over oil and gas drilling off the North Carolina coast Monday evening inside the Hilton North Raleigh/Midtown. But their messages were an ocean apart.

In a third area, the federal Bureau of Ocean Energy Management held an open house to gather public comments, distribute information, and answer questions. Officials will consider the feedback as they decide whether to sell oil and gas leases on the Atlantic Ocean’s Outer Continental Shelf starting in 2020.

Opponents of seismic testing to locate energy deposits beneath the ocean floor, and erecting rigs to extract it, put on a raucous display. They waved placards and cheered nearly every statement from speakers.

“All of those who come from around the world to share [North Carolina’s] shores know that our Mother Ocean is one such sacred thing,” Butler said. “We as climate change believers know that there are better energy solutions, renewable sources of energy, not the fossil fuels of the past.”

Cooper has threatened to sue to stop drilling if it gains federal approval.

The North Carolina Energy Forum held a more reserved press conference, promoting the benefits of domestic energy production to a small gathering of media and supporters.

David McGowan, executive director of the North Carolina Petroleum Council, said oil and gas production would create good paying jobs in coastal communities that aren’t seasonal in nature. It would diversify the economy, and help bridge the rural-urban divide.

“This is not a productive, responsible state energy strategy,” McGowan said. 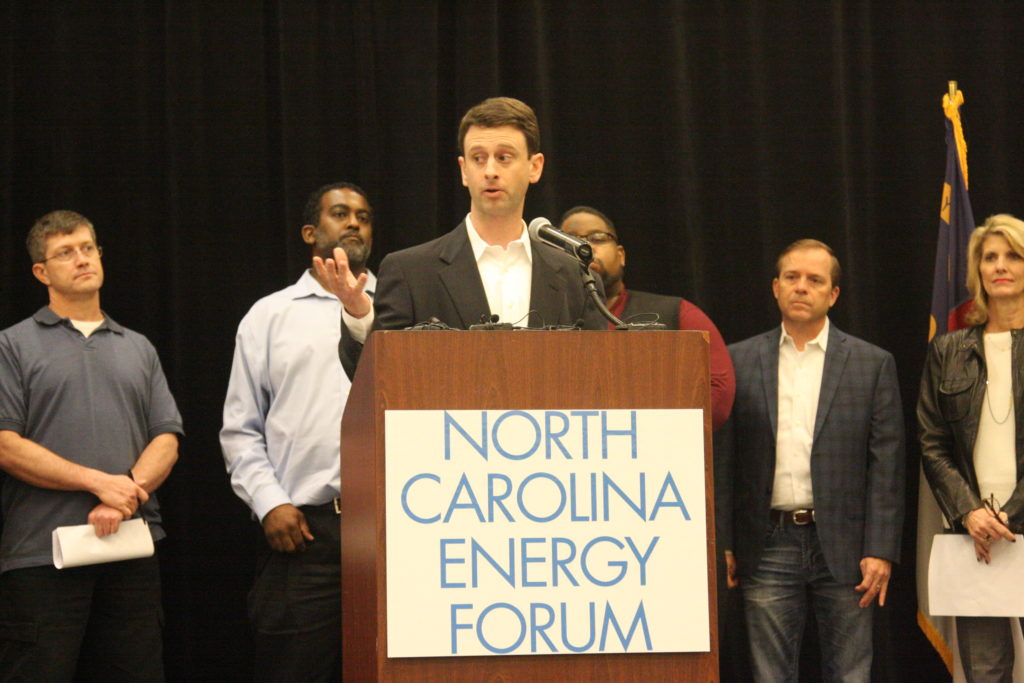 David McGowan of the N.C. Petroleum Council touts the benefits of offshore energy drilling at a Feb. 26 press conference in Raleigh. (CJ photo by Dan Way)

North Carolina consumes 98 million barrels of oil, or more than 4 billion gallons, annually, making it the seventh-highest user in the nation, he said. Most of the state’s electricity comes from natural gas.

Instead of pushing development to areas of the world where environmental protection and safety regulations are weaker than in the U.S., North Carolina should do its part to bring domestic energy to the market, McGowan said.

“We are rational environmentalists, and that is the case with millions of people who support this kind of thing,” said Matthew Horsley of Pinehurst, a retired Army lieutenant colonel who served at Fort Bragg.

“The Gulf War was necessary and a worthy cause, but it was because of our dependence on Persian Gulf oil,” Horsley said. Something like it should never happen again. “Sending GIs to miserable places like the desert of Saudi Arabia to protect the flow of something abundantly available right here is foolish, and frankly, I think, immoral,” he said.

Horsley said the U.S. has an excellent record of drilling safety, notwithstanding a few high-profile accidents.

Mike Reed of Wilmington, wearing a T-shirt with the message “Stop the drilling,” was among more than 400 people attending the BOEM open house.

“Nobody’s going to be able to change my mind. You can tell me anything you want, show me all your graphs, give me all your studies,” Reed said. “Anything a man can make will break. … And then you’re going to have contaminated water and beaches.” 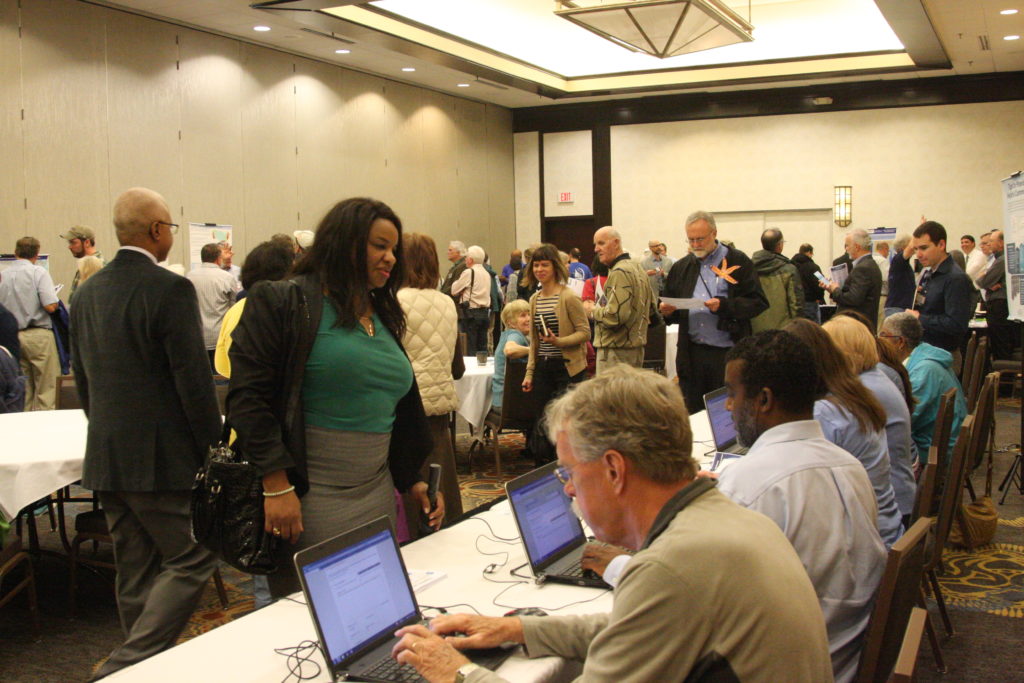 Members of the public enter comments on laptops provided by the Bureau of Ocean Energy Management at a forum on offshore energy production Feb. 26 in Raleigh. (CJ photo by Dan Way)

If U.S. Interior Secretary Ryan Zinke signs off on lease sales, the process won’t be quick. Zinke will decide to allow leases no earlier than late 2019 or in 2020. Then the federal government will produce a five-year schedule. During that time, BOEM will write an environmental impact statement in consultation with the Department of Defense, NASA, and NOAA’s Endangered Species and Coastal Zone Management acts.

The state would get information about potential coastal impacts to fisheries, boating, beaches, and tourism, Cameron said, and have 60 days to concur or object to a lease sale.

“We want to just ensure that we’re working with facts, not the misinformation that we hear from some of the environmental interests that want to shut down all oil and gas exploration offshore. We’re open to talking to the governor’s office,” said Dustin Van Liew, vice president of regulatory and governmental affairs for the International Association of Geophysical Contractors.

“There’s been no documented evidence of injury or harm to marine animals from seismic surveys,” Van Liew said. Layers of mitigation precautions are in place to protect marine mammals and avoid disrupting marine life.

The industry group has been waiting more than 900 days for five permits to conduct seismic surveys to locate oil and gas deposits. Van Liew said approvals could come in the next 30 to 60 days. The permits are separate from the lease sales.