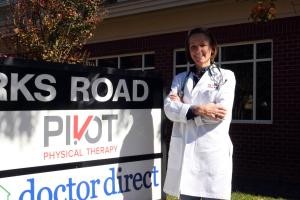 RALEIGH — Amy Walsh remembers vividly the day she quit her job as primary-care doctor at a medical practice to seek a better way to provide health care. In a few weeks she will join nearly a dozen direct primary care family practices in North Carolina that deliver primary services for a monthly fee while not accepting medical insurance.

“I didn’t necessarily want to give up my career, but didn’t want to practice that way,” she said of the “hamster wheel” of high-volume (but, in her view, not necessarily high-value) care that she was providing as part of a large medical network in Wake County.

“Over the last several years I grew increasingly frustrated with what my job had become versus what I had envisioned when I left medical school,” Walsh said. The traditional fee-for-service model asks “really good doctors to practice bad medicine.”

In addition to seeing patients, doctors often face three hours or more daily of charting notes, metrics, data points, prior authorizations “and all that craziness” that insurance requires, most of which did little to help patients, Walsh said.

The most important partner a doctor has is a patient, “not a hospital, not a network, not an insurance company, none of that,” Walsh said.

So as she researched alternative means of fulfilling her quest for a more meaningful doctor-patient relationship. When she stumbled across the concept of direct primary care, “a light bulb went off in my head, and my heart skipped two beats,” she said.

Jay Keese, executive director of the national Direct Primary Care Coalition, has described direct care as a no-insurance “defined set of high-functioning primary care and prevention services delivered by a physician” through an all-inclusive monthly fee that could be viewed much like a retainer.

Direct care was getting away from “insurance that was ungodly expensive,” brief visits after long waits in doctors’ offices, and unreturned phone calls, Walsh said. “Direct care solved all of these problems that everybody’s been screaming about.”

She said direct care requires a re-examination of how medical treatment is provided, and compared it to auto insurance.

“You don’t pull out your auto insurance card when you go get gas and an oil change, or rotate your tires. You take care of the maintenance yourself,” and use insurance for an accident, Walsh said.

“Primary care should be separated from [health] insurance because that’s the most affordable part,” and insurance should be used for specialty care, major medical issues, unexpected surgeries and the like, she said.

She contacted other doctors practicing direct primary care in North Carolina and in other states. “I talked with folks in Seattle, and Denver, in [Philadelphia], and Georgia, and Kansas,” Walsh said. She made visits, taking notes, studying fee schedules and vendor lists for contracted lab services, data that she tailored into the design of her own practice.

She will open her Doctor Direct practice in leased space on the second floor of the Raleigh Neurosurgical Clinic on Six Forks Road in a few weeks.

The trade-off for patients? In exchange for paying lower rates, patients cannot file their monthly visit fees under insurance plans.

“You take out all the layers of expense, and bureaucracy, and confusion” by eliminating insurance, Walsh said.

Lab work, though, will be billed separately, as will prescriptions from the on-site pharmacy. Costs for those generally will be lower than can be obtained through insurance, but patients could file for insurance reimbursement.

“I didn’t find it exceedingly difficult in North Carolina to pass any of the rules and regulations … to get my practice up and going, Walsh said. “I actually found compared to some other states that North Carolina was pretty friendly.”

Direct care also could be part of the solution to curb state Medicaid costs and reduce the shortage of doctors who accept the government insurance program for the poor, elderly, and disabled, Walsh said.

Patients would have direct access to a doctor “for a predictable amount on a monthly basis. Why wouldn’t the state consider that?” Walsh said.

“By taking all of that insurance expense out of it and paying the entire health care piece in this monthly fee environment, we’re saving 40 cents on the dollar in the provision of primary care,” Keese said. Some of the savings goes to the doctor, and some to the system.

“So if it’s government paid, you save the government that 40 cents on the dollar,” he said.

“For all the talk about the Affordable Care Act bringing people insurance,” Keese said, “this is what really fixes health care.”