Harry Smith, the former leader of the University of North Carolina System board, during his tenure was publicly described as “hands-on,” or “very involved” in the operations of the university system and its 17 campuses.

A new trove of emails released by the UNC System Friday, Nov. 8, show exactly what that means — and how Smith’s involvement may have complicated UNC business behind the scenes.

Most of the emails released pertain to the recent East Carolina University scandal surrounding former interim Chancellor Dan Gerlach, BOG member Tom Fetzer, and Greenville attorney Peter Romary. But some of the documents shed light on an older drama that brought ECU to the current controversy.

Smith, a Greenville businessman, stepped down as BOG chairman Oct. 1. He announced his resignation from the full board Nov. 4, saying he would remain until Feb. 1. His work demanded more time and attention, Smith told Carolina Journal.

But Smith has a long history of tension with some BOG members and campus leaders.

In particular, Smith’s involvement with affairs at ECU and its former chancellor, Cecil Staton, caused friction between Smith and leaders of ECU’s board of trustees, emails show. In 2016, Smith — an ECU alumnus — was exploring a housing deal several miles from ECU’s campus. The situation would’ve required the university to change campus housing policies — a situation Staton wasn’t willing to consider.

Kieran Shanahan, a Raleigh attorney and the chairman of ECU’s board at the time, said the proposed housing deal would pose a conflict of interest for Smith as both an investor and a member of the system’s governing board. After that Smith backed away, though he claimed it was because the deal didn’t make financial sense for the university.

Smith launched a vendetta against Staton, multiple sources familiar with the situation told CJ over the course of the past year. All wished to remain anonymous, fearing retaliation.

In March, Staton resigned his position at ECU, saying “there are some storms you cannot weather.”

Immediately after Staton’s resignation, BOG member Steve Long released a public letter calling out Smith for repeated attacks on Staton, in part due to the beleaguered housing deal. Days after releasing the letter, Long publicly apologized to Smith for how he handled the situation. He didn’t apologize for the letter’s contents, however.

Smith repeatedly denied the narrative, going so far as to call CJ’s reporting false and intentionally misleading. He claimed a spirit of unity reigned among ECU trustees and officials as well as UNC BOG members and staff.

Throughout a year of reporting, CJ collected records and accounts that showed Smith’s public statements didn’t always align with his private discussions.

Now, newly released emails show intense exchanges between Smith and Shanahan, along with complaints about backbiting within the institutions.

In January, two months before Staton’s resignation, dozens of leaders in the Greenville community sent UNC leaders a letter of support for Staton. 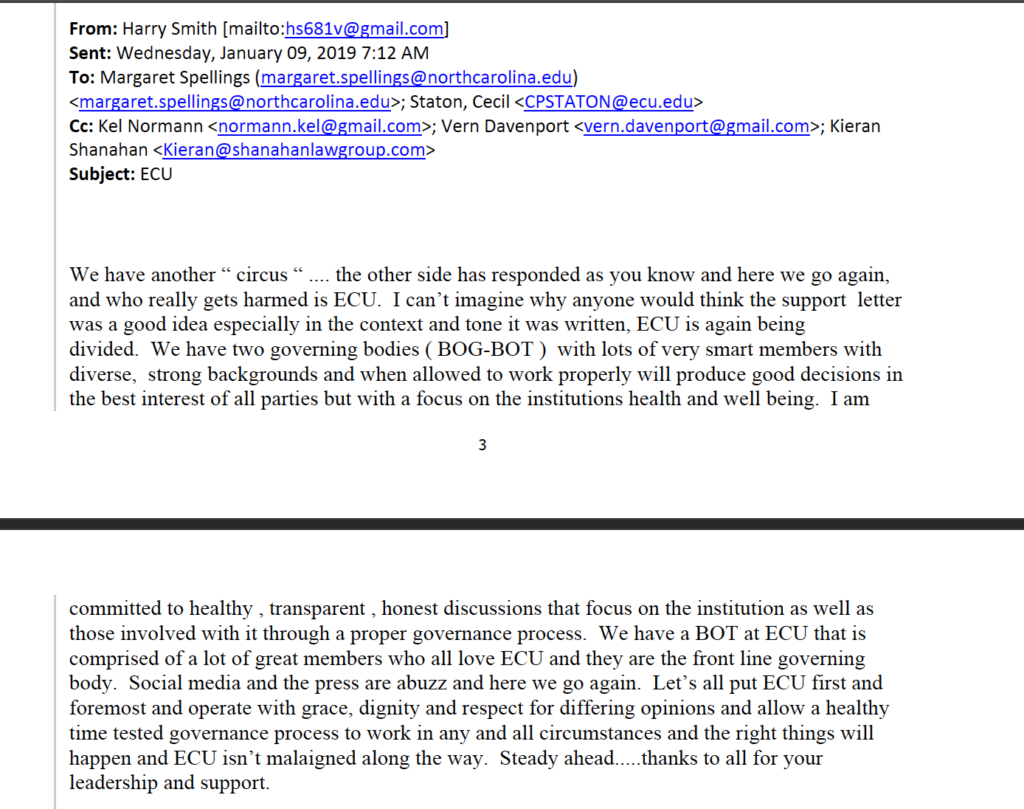 “We have another ‘circus’ …. the other side has responded as you know and here we go again, and who really gets harmed is ECU,” Smith wrote. “I can’t imagine why anyone would think the support letter was a good idea, especially in the context and tone it was written, ECU is again being divided.

“We have two governing bodies ( BOG-BOT ) with lots of very smart members with diverse, strong backgrounds and when allowed to work properly will produce good decisions in the best interest of all parties but with a focus on the institutions health and well being,” Smith continued. “I am committed to healthy , transparent , honest discussions that focus on the institution as well as those involved with it through a proper governance process.”

In conversations with CJ in November and December, Smith insisted Staton had his support.

“There has clearly been an organized effort from a very small, but vocal group to create a false narrative and it’s being done through petty, personal attacks intended to harm or malign me. The ECU Board of Trustees has stated that Chancellor Staton has their support and I fully respect their position,” Smith wrote in the Nov. 9 email to CJ.

But Smith couched his opinions in another email to Shanahan. 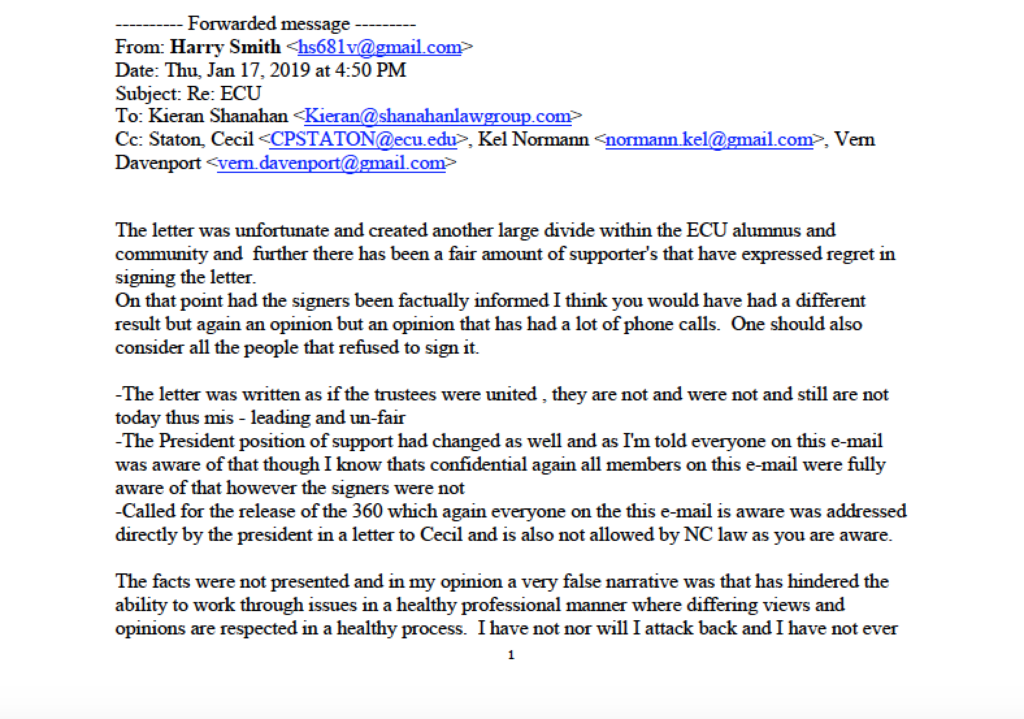 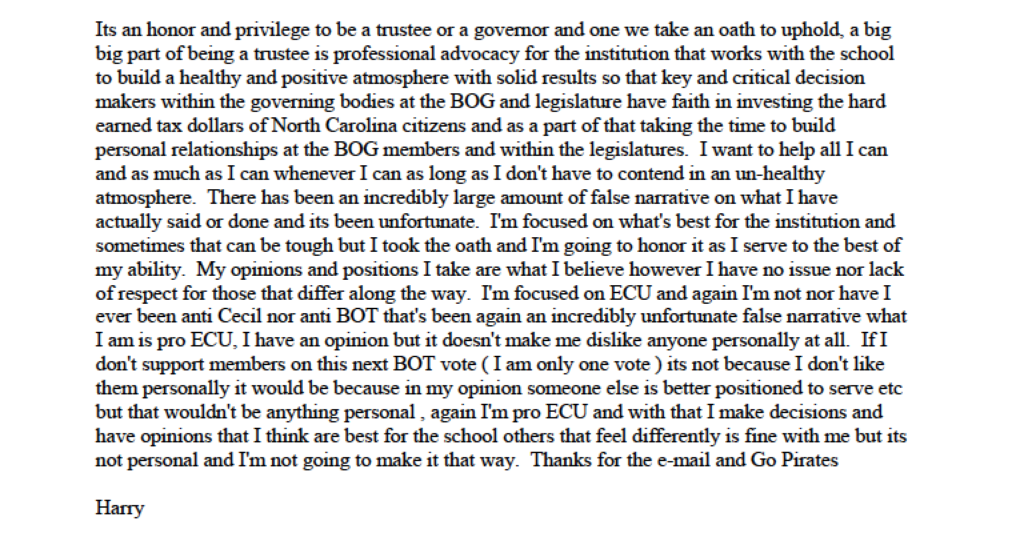 “I have and will continue to ask tough governance and over-sight questions in the best interest of all our schools and I have, the only challenge in me doing that has been ECU which is unfortunate. What I have said and only within proper stake holder conversations was that in ‘my’ opinion Cecil did not have the training nor experience to run an asset the size and with the complicity as ECU does and I still contend that today , I am not anti Cecil nor anti ECU BOT I am pro all of our schools and that certainly goes to ECU.”

“My focus is whats the best for the institution simple as that. I further strongly believe that the [decision to fire former athletics director Jeff Compher] and Stadium expansion belong to the BOT and Cecil felt tremendous pressure in both cases and unfortunately that hurt Cecil tremendously, as I have told Margaret and many others on many occasions this wasn’t all Cecil’s fault. With all that said it has been a circus approach and the letter stunt continued just that type of atmosphere at ECU. My time is short thus I cannot operate with games, positioning nor politics what I simply want to do is all I can while I can and unfortunately thats been very difficult and ECU again suffers.”

Most of the emails and documents released Nov. 8 by UNC have to do with a recent scandal surrounding ECU’s now-resigned interim Chancellor Dan Gerlach, who took over after Staton’s May departure.

That drama unfolded after video surfaced of Gerlach drinking with students at a Greenville bar in late September. UNC hired a law firm to conduct its own investigation, but Peter Romary, an attorney and private investigator with connections to both Smith and board member Tom Fetzer, interfered with proceedings, emails and records obtained by WBTV show.

Romary obtained video from a Greenville city camera showing Gerlach stumbling down a sidewalk, then getting into a car and driving away. The footage was from the same night Gerlach was photographed drinking on the town.

The video was later anonymously leaked to the media.

Fetzer, a lobbyist, former Raleigh mayor, and former head of the N.C. Republican Party, hired Romary’s firm QVerity last year to conduct a background check — without the approval of UNC System officials — of a candidate for the then-open chancellorship at Western Carolina University.

The investigation resulted in upheaval, and the candidate — a selection made by Spellings — was rejected by the board. Some members were outraged.

Fetzer reportedly sought the WCU opening, but Fetzer insisted he wasn’t after the job. Others asked him if would take it and he refused.

A timeline of communications provided by UNC shows that Fetzer was entangled with Romary in the pursuit of the city’s video footage of Gerlach.

“John — Don Phillips is the Asst City Atty for Greenville overseeing the police Dept. Please call him and tell him you are aware that Peter Romary ( Ro’maree w emphasis on the first syllable ), an attorney representing me as a BOG member, the Fraternal Order of Police and the Police Benevolent Assoc, has requested the preservation and release of video tapes showing Interim Chancellor Gerlach getting in his car and driving away around 2:20 am on 26 September,” Fetzer wrote.

“Tell him that the General Assembly has an oversight role and that you would like the tapes released to Mr. Romary and that time is of the essence.”

“Please do this today, if possible.”

A Nov. 6 memo from Womble Bond Dickinson, the law firm UNC hired to investigate Gerlach, says Fetzer was asked to provide “all his communications from calendar year 2019 related to the UNC System or ECU.”

“In response,” the memo says, “Mr. Fetzer provided approximately 15 emails, none of which were communications with Peter Romary or North Carolina House Majority Leader John Bell about this matter under investigation.”

The records from UNC were released around 5:30 p.m. Friday. Access the email files here.