New, passenger-only ferry will debut in 2018, charging $15 as alternative to boats that carry cars and people for free

North Carolina is betting on an expensive project to increase consumer spending in a small area of the state, and this time it’s starting with a $6 million down payment.

The N.C. Department of Transportation’s Ferry Division is counting on ferrying enough travelers to Ocracoke Island, hoping they’ll leave their cars in Hatteras to justify spending millions on a passenger-only ferry vessel and related infrastructure.

The new service begins next summer and will operate May through September. Passengers will pay $15 for a round trip from Hatteras to Ocracoke Village on the southern end of the island.

Six vehicle-ferry vessels making 36 trips each way during the peak summer months already serve the Hatteras to Ocracoke route. That service is free. That route ends at the northern part of the island, 14 miles from Ocracoke Village and the ultimate destination for the new ferry. 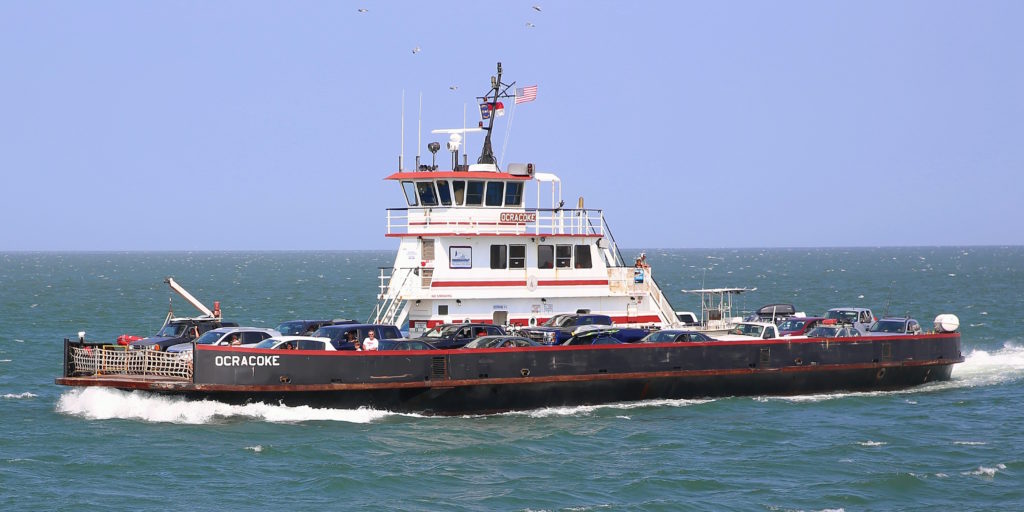 The Ocracoke is on of six vehicle-ferry vessels making daily round trips between Hatteras and Ocracoke Island. (CJ photo by Don Carrington)

“Doing nothing is not an option,” said Ferry Division communications director Tim Hass, who cited traffic problems on Hatteras during the summer. “This will give people a choice of how to access Ocracoke and increase visitor spending on the island.”

Some projects include the Global TransPark in Kinston, the Randy Parton Theatre in Roanoke Rapids, and the Southport Megaport. All were preceded by reports forecasting thousands of jobs and significant economic impact. The TransPark only attracted a small fraction of the projected employment, the Parton Theatre was an economic disaster, and the Megaport was never built.

A DOT-commissioned study estimates initial ridership at 52,000 for a single 100-person vessel making four daily round trips between Hatteras and Ocracoke, and 74,800 for two vessels making four trips.

But DOT decided to buy just one vessel.

On June 6, DOT awarded a $4.15 million contract for the construction of a 98-passenger ferry vessel, even though it hadn’t gotten federal approval to build the necessary infrastructure on the federal land.

The Cape Hatteras National Seashore, a division of the National Park Service, approved the project July 11.

The project also calls for an additional $2.3 million for new docks, a new shelter, other infrastructure, and a public ground transportation system at Ocracoke. A federal grant program will provide 80 percent of the initial funding for the project.

The state will pay the rest.

The Hatteras-Ocracoke project isn’t the DOT’s first attempt to establish a passenger ferry service. DOT tried but failed to establish a new passenger service between Currituck and Corolla in 2004. Carolina Journal stories chronicled the failed project.

Let’s start with the latest project on Ocracoke Island, which is part of Hyde County but inaccessible by road. It can be reached only by three ferry routes, by private boat, or by airplane. The permanent population is fewer than 1,000 but can swell to several thousand in summer.

Hatteras is in Dare County and accessible from Nags Head via N.C. Highway 12.

Life in North Carolina’s Outer Banks communities, particularly those south of Nags Head, can be disrupted by nature as well as man-made events. Storms periodically cause the ocean to wash over portions of N.C. 12, which leads to closures.

In July, a contractor working on the new Bonner Bridge accidently cut the main underground power line leaving Ocracoke, Hatteras, and the other small villages without electrical power for a week.

CJ talked with several people who worked on Ocracoke about the new ferry service. Many had opinions but just a few agreed to talk on the record.

Several said most people wouldn’t want to leave their cars in Hatteras because they would also have to leave most of their beach gear. Some thought people would scoff at the $15 fee because the current vehicle ferry is free.

But others thought it a fine idea, as it may increase visitors, who spend money.

Vince O’Neal, who owns the Pony Island Restaurant, sat firmly on the fence.

Ann Warner, owner of Howard’s Pub, said the passenger ferry would give people another option to travel to Ocracoke, and she remains optimistic.