The General Assembly is moving quickly to produce new congressional maps in time for the 2020 elections.

Four different groups collaborated on separate map drafts in the redistricting committee room Friday, Nov. 8. All drafts are due Nov. 12. Several have been published on the Joint Select Committee on Congressional Redistricting website under “Documents.” One reason for the various drafts is that plaintiffs have disputed a proposal to use a map they helped to craft. 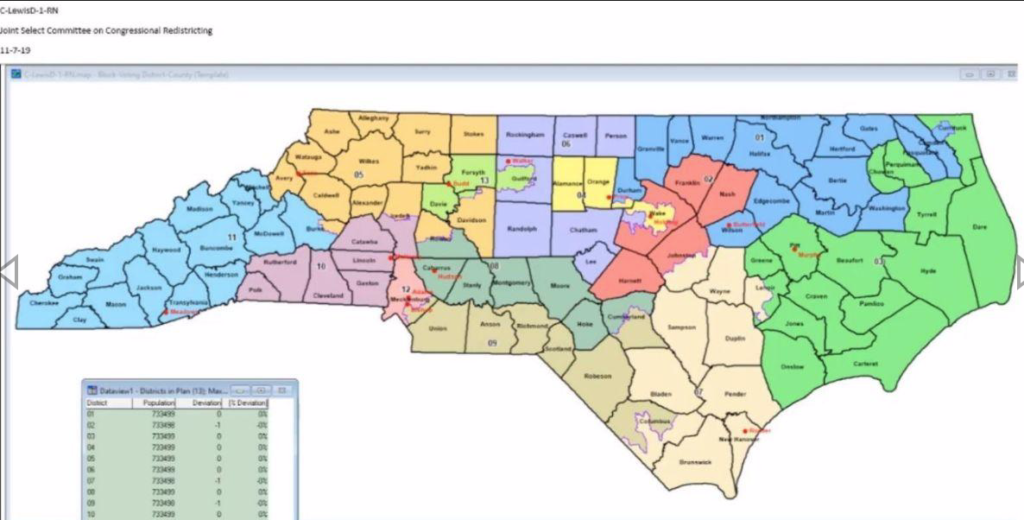 Some of the biggest differences among the maps revolve around the areas surrounding the state’s largest cities, Charlotte and Raleigh.

Members may not refer to any partisan or racial data while drawing the maps and must make all adjustments on computers where the screens are live-streamed and recorded for the public to view.

With the congressional districts, some committee members want to start with a base map, referred to as the “Common Cause map.” But Common Cause doesn’t want the General Assembly to use that map as a starting point. In a statement, the group said the map was an intellectual exercise, not a guide to policymakers.

The map was designed in 2016 by a bipartisan panel of retired judges as part of a “nonpartisan map-drawing simulation” organized by Common Cause N.C. and Duke University, the group said.

“Our map-drawing simulation utilizing some of the state’s most respected retired jurists was about highlighting one thing — that drawing maps in an open manner, without any influence from partisan lawmakers and without any political consideration, makes for a better redistricting process,” the group said. “Our goal never was, and never has been, to create a map that lawmakers or the courts should hold up as a map for the state to adopt.”

Earlier in the session, the General Assembly passed new maps for House and Senate legislative districts. Lawmakers started with computer-simulated maps produced by University of Michigan political science professor Jowei Chen, who testified as an expert witness on behalf of plaintiffs in the legislative redistricting case Common Cause v. Lewis. After selecting those simulations as “base maps,” members made adjustments, including those limiting how many incumbents would run against each other in 2020.

Plaintiffs objected to those base maps as well, although the court eventually approved the maps.

After map drafts are submitted, members will hold a public hearing Wednesday.

And, as Sen. Ralph Hise, R-Mitchell, a committee co-chair, said last week, it’s not even clear the court is demanding a new congressional map anyway, as it hasn’t formally rejected the current one.

“We are currently under a state court’s ‘wink-and-nod’ quasi-order that says they haven’t gone through enough process yet to determine that the current congressional maps violate the North Carolina Constitution, but they ‘urge’ us to go ahead and create new maps,” Hise said Nov. 4.

Candidate filing is set for early December unless the courts haven’t resolved the mapmaking disputes by then.

The Right AOC on Point: Uncertainty about N.C. school plans could lead parents to alternatives