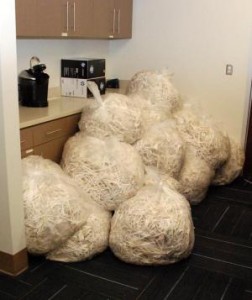 DURHAM — Durham County officials on Monday destroyed gun registration documents stemming from a Jim Crow-era statute, ending months of legal uncertainty over ownership of the materials and threats of legal action had the records been preserved.

“I am pleased that we have closed that chapter of Durham’s history,” said state Sen. Mike Woodard, D-Durham, who successfully sponsored repeal legislation in this year’s short legislative session ending the practice of forcing gun owners to register their firearms. It was the only gun registry in North Carolina.

“The gun registry records were destroyed this morning,” Woodard said Monday. “The clerk [of courts] and the Sheriff’s Office got together this morning, and took them out, and shredded them.”

Woodard maintained all along that his repeal bill was intended to result in destruction of the gun registry, and said he would introduce a bill in the upcoming long session specifically mandating disposal of the records if the issue was not resolved.

“We met two weeks ago to administratively make it happen,” Woodard said.

“I convened a meeting with the clerk, the sheriff, the county manager, and their respective counsel, and at that meeting we came up with the path that we needed to go to clear up ownership, and who’s going to take action,” he said.

Destruction of the gun registry, first implemented in 1935, is “absolutely” a victory for gun owners’ Second Amendment and privacy rights, said Paul Valone, president of the nonprofit gun rights organization Grass Roots North Carolina. “It is, I’m quite certain, a direct response to the certified letter we sent them” about the state’s pre-emption law.

Valone was unaware of the county’s action until notified by Carolina Journal.

Once the gun registration statute was repealed, it became “very clear that a unit of local government may not regulate or register firearms in any manner, and that’s precisely what they’re doing” by maintaining the registry, Valone said. “So essentially what we said was either they destroy the records, or we destroy the records, or else we will sue you.”

Valone’s organization had offered to pay a commercial vendor to shred the documents and recycle the waste paper.

“We were there to assist and observe the clerk,” Durham County Sheriff’s Office spokesman Brian Jones said of the records shredding.

The Sheriff’s Office had been receiving complaints and inquiries from Durham residents, mostly those whose gun registrations were kept on file, to determine what would be done with the records, Jones said.

“This is a good thing for all N.C. residents. My two are in there somewhere. The others, I never registered anyway,” Richard Dean wrote on the Facebook post.

“A registry does nothing to prevent people from acquiring black market firearms. Also, not having a registry makes it ever-so-slightly more difficult for government to confiscate firearms from law abiding citizens,” wrote Jameson Lopp.

“The death of another Jim Crow law is always a good thing,” wrote Sean Sorrentino.

Durham County Clerk of Courts Archie Smith, a licensed attorney since 1976 who described lawsuits as his “bread and butter,” said the Grass Roots North Carolina threat of litigation “had nothing to do” with the decision to shred the records. “It was simply a matter of they had passed their time.”

“The Administrative Office of the Courts had no interest in them because they weren’t state files. They were strictly something for Durham County. The State Department of History and Archives said they had no interest in keeping them and preserving them. The county attorney for Durham disclaimed any interest on behalf of the county in them,” Smith said.

“So as the clerk of court, if none of the legal entities for whom I’m charged with maintaining and keeping records have any interest in these records, and there is no owner of them, no one wanted them … retention of them was pointless,” he said.

“The sheriff and I fed the first few through, and then some folks up here in the clerks’ office fed them through,” Smith said.

Smith acknowledged the hullabaloo created by the situation was unusual for his office, which only occasionally deals with interesting or newsworthy events.

“Our work is critical, but plain vanilla,” he said. “A horrorific day up here is when somebody gets a paper cut.”

Justin Furr, spokesman at the North Carolina Administrative Office of the Courts, said the agency works with elected clerks of Superior Court on rules for record-keeping and record retention. That includes how long court records must be kept and when they can be disposed.

The Durham gun registry documents were not covered by the AOC’s Records Retention Schedule, so the clerk of Superior Court was required to complete a form with the Office of Archives and History in the state Department of Cultural Resources.

The AOC “received a phone call from Sen. Mike Woodard several months ago asking that we determine if the gun registry documents are needed for permanent retention,” Furr said. After discussions with Cultural Resources, it was determined “the documents did not need to be retained permanently, and that the county custodian could find the disposition that best suited local needs for these records.”

Valone, whose organization has successfully sued state and local governments on other gun rights issues, is now turning its attention to attempts
by State Agriculture Commissioner Steve Troxler, who has announced that guns, including lawful concealed carry weapons, could not be brought into the State Fair, and that warning signs would be posted.

“He has no legal means to do this. I don’t even dislike Steve Troxler. He’s a nice guy. We’ve worked with him before,” Valone said. But by refusing to rescind his decision, “he’s going to make us force him to do it via legal action.”

Troxler has created a situation now that only raises the “visibility of the issue,” Valone said. “I would just as soon we kept it all nice and quiet, and simply not post[ed] the signs.”