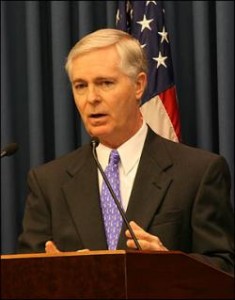 RALEIGH – Gov. Mike Easley has proposed North Carolina’s first $20 billion budget, thanks to $210 million in new taxes and a 7.2 percent increase in the state’s operations spending, according to a preliminary analysis from the John Locke Foundation.

“The total budget increase is more than $1 billion, so we can truly say the state will now have a $20 billion budget,” said Joseph Coletti, JLF fiscal policy analyst. “The overall increase is 6.4 percent, but that number is artificially small because the governor would use less cash for capital projects and instead issue $1.7 billion in new debt.

“That 7.2 percent figure is a better gauge of growth from the current budget to the budget Gov. Easley wants,” Coletti said. “Any way you look at it, $20 billion in spending works out to about $2,200 per person in North Carolina. That’s about $9,000 for a family of four.”

To pay for that spending, the governor would maintain “temporary” sales taxes that are now scheduled to disappear July 1. After recommending income tax changes for families with the lowest incomes, North Carolina would still face a total tax increase of $210 million.

“The sales and income taxes bring in more than $300 million in new revenue the government wasn’t expecting,” Coletti said. “Even though the rates will not change, this is a tax increase. The governor considers it a tax increase in his budget documents.”

The governor’s budget offsets some of the increase by eliminating state income tax for 545,000 individuals and families, and cutting income tax in half for another 630,000. “The sales tax increase will more than offset the income tax cut,” Coletti said. “The governor is taking money from poor people’s pockets and giving them back a small portion of that money. It’s like a magnanimous mugger who takes your wallet and leaves you with busfare.”

Easley’s budget includes a 50 percent increase for the One N.C. Fund, the program that offers cash grants to companies that promise to add jobs within the state. That fund would grow from $10 million to $15 million. “Based on figures linked to the current use of the One N.C. Fund, the state is offering grants that represent about 1.3 percent of the total investment that grant winners say they’re making in North Carolina,” Coletti said. “It’s as if the state wants to give you one free download when you buy an iPod. There’s no way those grants make or break a company’s decision to come to North Carolina.”

Easley continues to support higher pay increases for public school teachers than for other state employees. Teachers would get average 5 percent pay hikes, while state employees would see 2.5 percent increases. “North Carolina teachers are already among the best paid in the country, when you factor in cost-of-living, pensions, and experience factors,” Coletti said. “Instead of across-the-board pay increases, we need to focus on quality through merit pay.”

The governor wants to expand his Learn and Earn program, which allows students to use an extra year of study to earn an associate’s degree or two years of college credit. A new $50 million EARN scholarship program would target low- and moderate-income students for grants to get another two years of subsidized college education. “These are unproven programs,” Coletti said. “It seems like a case of spending money just because it’s there to spend.”

Easley’s budget plan includes no relief of counties’ Medicaid burden. North Carolina is the only state in the country that forces counties to pay a fixed percentage of the costs for its Medicaid program. Though he left Medicaid relief out of the budget, Easley signaled in his budget briefing that he wants to see that issue addressed this year.

The governor wants to tweak the state’s lottery funding formula. The governor believes the state lottery will generate more money for schools if the state-run numbers game devotes 59 percent of its proceeds to prizes and 29 percent to education programs. Those numbers are now 52 percent and 35 percent respectively.

“I wish they would figure this out with taxes: sometimes when you lower the rates, you get more revenue,” Coletti said. “That’s what they’re doing with the lottery to get more money to schools.”

The state would set aside about $238 million for its emergency reserve, the Rainy Day Fund, under Easley’s plan. That would bring the fund to $849 million by the end of the budget year.

“The Rainy Day Fund is always a good investment,” Coletti said. “It would have been better for the governor to cut back spending while placing more money in the Rainy Day Fund.”

Easley could have tightened the state’s belt in other places, Coletti said. “The governor said he didn’t allow the temporary taxes to expire because he didn’t want to leave a budget hole for the next governor in 2009,” he said. “The other way to deal with holes is to stop digging them. Reduce the growth of spending. Use money where you need it.”

Inflation and harming the ‘least of these’