Lot is located in exclusive Cannonsgate community on Bogue Sound 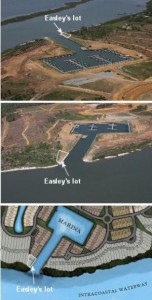 Gov. Mike Easley appears to have received a bargain price on a lot he purchased apparently through a political donor in December in a “most coveted” community on the Bogue Sound in Carteret County, according to land records.

Easley’s property is one of the most valuable lots in the 525-lot, 287-acre, gated subdivision located on the mainland across from Emerald Isle Beach. Carolina Journal has been unable to determine whether Easley plans to build a home on the lot or hold the property as an investment.

Carteret County land records show Easley and his wife, Mary, paid $549,880 Dec. 16 for the 0.36-acre lot at the Intracoastal Waterway and the entrance to the Cannonsgate marina.

Easley bought the lot from R. A. North Development, Inc. of Matthews. Real estate investor Lanny Wilson of Wilmington, through his company Cannonsgate Investments, LLC, provided $12.5 million in financing for the project. Wilson’s Deed of Trust to the developer is dated July 8, 2005.

Wilson is a major political donor to Easley and other Democrats. Easley appointed him to the Real Estate Commission and to the N.C. Board of Transportation.

Advertised as “the Crystal Coast’s most coveted address,” the master plan includes a 75-slip marina, tennis courts, a pool, and a clubhouse.

Initial lot sales were through private offerings or word of mouth, said three lot owners, who did not want to be identified. CJ was unable to determine how Easley learned about the property and who set the price for his lot.

“At this point I don’t feel comfortable talking about the governor’s business. We try to keep people’s privacy,” Cannonsgate’s lead real estate broker Mace Watts said. “We like to have people like the governor because it says a lot for the community.” Watts appeared surprised when told CJ had obtained a price list for Phase I of the project. He refused to say what the prices were for lots in Phase II, where Easley’s lot was situated.

The property is being developed by R. A. North Development, Inc. President Randolph M. Allen listed the company’s business address as Matthews. CJ was unable to contact Allen. Easley spokeswoman Sherri Johnson, responding to a CJ email, wrote, “I have no information regarding a personal business transaction of the Governor.”

CJ’s analysis of other Cannonsgate property sales indicates that Easley’s purchase price was significantly below market value. “While tax value is rarely equivalent to market value, it can be a good starting point for analysis,” Carteret County Tax Administrator Carl Tilghman said. “We compared these properties to similar properties in the area and set the value,” he said.

Stephen Stroud of Raleigh bought the other marina entrance corner lot across from Easley’s. His was the only lot purchased for less than tax value. An analysis of several real estate documents indicates that Stroud probably arranged a special deal because he was the most recent owner of the entire tract.

Easley’s and Stroud’s lots are the only two that adjoin the marina and the Intracoastal waterway. Cannonsgate literature describes the lots as follows: “Imagine having the excitement of the Intracoastal Waterway at your doorstep. Roll up your jeans to dig for clams, drop anchor and fish for hours in the plentiful waters, or just relax and watch the world float by while you enjoy that incomparable waterfront lifestyle.”

“The homesites along the marina offer an exceptional social lifestyle. Imagine the buzz of activity as you peruse the docks and get ready for a day on the boat with family and friends. Venture out for an evening stroll and wave ‘Hello!’ as you put your feet up to read the latest best seller, iced tea in hand. The marina group will be a community of friends like no other.”

When asked about the incorrect address, Stanley said, “Probably a mistake. I don’t know.” After checking his files, he said that the address was picked up from the Nov. 30 sales contract and that the handwriting was not very clear, but that real estate broker Mace Watts apparently filled in the address. Watts had no explanation and no comment.

Easley’s deed of trust shows he secured a $494,000 loan from Branch Banking & Trust Company of Whiteville. That document lists his address as 200 N Blount Street, the address for the Governor’s Mansion.

The Cannonsgate marina required a Coastal Area Management Act permit from the N.C. Division of Coastal Management. CAMA Major Permit Manager Doug Huggett said a permit for constructing the marina was originally issued in 1988 to Broad Reach Investments, a group that included Raleigh developer Stephen Stroud. Even though there was little activity on the site for several years, Stroud renewed the permit six times. In 2003 state officials turned down the renewal because there had not been enough development at the site. Stroud made a successful appeal to the Coastal Resources Commission and a new permit was issued in 2003. The permit was renewed in December 2004.

Huggett said Stroud persuaded the commission that he had made significant investments that would be lost if the permit were turned down. After receiving the new permit, Stroud sold the property July 8, 2005 to R. A. North Development, Inc. The sales price indicated on the deed was $19.4 million. A major modification to the permit was issued Aug. 17, 2005 and the permit was transferred to Cannonsgate.

Easley’s lot acquisition was taking place at the same time he was orchestrating a new lease for Wilmington real estate developer Charles “Nick” Garrett and the other new owners of the Southport Marina, Inc., the company that operates the state-owned marina in Southport. Garrett and Wilson share a Wilmington office and are business partners in the development of condominiums adjacent to the Southport Marina. Garrett also is a major political donor to Easley and other Democrats.

According to his Statement of Economic Interest filed with the N.C. Board of Ethics in February, in addition to Cannonsgate, Easley owns three other properties: a home on East Lake Drive in Raleigh, a home on the Cape Fear River in Southport, and one–half interest in a home at Bald Head Island.