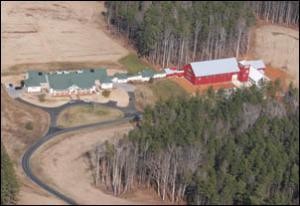 Presidential candidate John Edwards and his family recently moved into what county tax officials say is the most valuable home in Orange County. The house, which includes a recreational building attached to the main living quarters, also is probably the largest in the county.

“The Edwardses’ residential property will likely have the highest tax value in the county,” Orange County Tax Assessor John Smith told Carolina Journal. He estimated that the tax value will exceed $6 million when the facility is completed.

The rambling structure sits in the middle of a 102-acre estate on Old Greensboro Road west of Chapel Hill. The heavily wooded site and winding driveway ensure that the home is not visible from the road. “No Trespassing” signs discourage passersby from venturing past the gate.

Don Knight, Orange County building plans examiner, told CJ that, including the recreational building, the Edwardses’ home would be one of the largest in Orange County.

Knight approved the building plans that showed the Edwards home totaling 28,200 square feet of connected space. The main house is 10,400 square feet and has two garages. The recreation building, a red, barn-like building containing 15,600 square feet, is connected to the house by a closed-in and roofed structure of varying widths and elevations that totals 2,200 square feet.

The main house is all on one level except for a 600-square-foot bedroom and bath area above the guest garage.

Edwards was the Democratic candidate for vice president in 2004 and a former N.C. senator.

Thursday afternoon, the Edwards for President press office was unable to provide information on any additional buildings planned for the estate.

Click here to view a larger version (735k) of house photo. To obtain a high-resolution version (4.7M) for use in print, email request to Don Carrington at Carolina Journal.