Elections Board Has Not Interviewed Donors About Flights 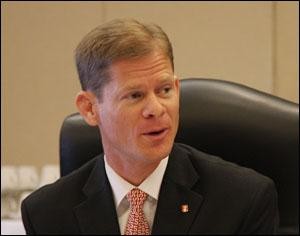 While reports from the State Board of Elections and in the news media indicate that more than 30 individuals were involved in providing dozens of illegal or improperly reported flights for Gov. Bev Perdue and her predecessor, Mike Easley, only one — Raleigh businessman McQueen Campbell — has been questioned under oath by the State Board of Elections.

Elections Board Chairman Larry Leake acknowledged to Carolina Journal that the board has questioned only one flight provider under oath at a public hearing, and, further, that it has not taken sworn testimony from any campaign workers about the questionable flights. Leake, a Mars Hill attorney, has served on the board for 18 years, the past 14 as chairman.

[Related story, “Why did Perdue campaign not use cheaper state plane?”, here.]

He did not explain the board’s apparent lack of interest to date in the individuals who provided the questionable flights and the campaign staff members who arranged them.

In October 2009, the board fined the Easley campaign $60,000 for the free flights from Campbell and an additional $40,000 for the cost of the public hearings. Other providers of free flights identified in a News & Observer story were issued subpoenas, but were not called to testify.

Among those subpoenaed but not questioned under oath are:
• Rusty Carter, a Wilmington businessman who was fined $100,000 by the board Sept. 29 for paying employees to make donations to political campaigns;
• Cameron McRae, a Bojangles franchiser and aircraft owner from Kinston;
• Dell Murphy, a Duplin county hog farmer and aircraft owner.

Over the past two years, the Perdue campaign paid nearly $60,000 directly to individuals who provided 42 free flights. At its Aug. 24 meeting, the board fined the Perdue committee $30,000 for not reporting the flights in a timely manner. The board also concluded that it found “no intent of wrongdoing” by the Perdue campaign.

The board also has not taken sworn testimony from a number of providers or arrangers of flights for the Perdue campaign, including:

• Mike Fulenwider, a businessman from Morganton;

• James Fleming, a barber in Morganton;

• Robert Caldwell, chairman of the Board of Trustees of Western Piedmont Community College in Morganton;

• Peter Reichard, a Greensboro businessman and finance director of the Perdue and Easley campaigns;

As for the Dec. 8, 2007, campaign flight arranged by Fulenwider and paid for by Fleming and Ola Caldwell, Leake said he was familiar with the situation “only to the extent of having read about it two days prior to the meeting.” Asked if the board would take up the issue in the future, Leake said, “The board is always continuing to inquire.”

The five-member elections board has general supervision over the North Carolina’s elections and is required to investigate anything with the appearance of fraud and irregularity. The board selects an executive director who oversees a staff of about 60 persons.

The members are selected by the governor from a list of five nominees submitted by the Republican and Democratic state party chairmen. The governor cannot select more than three members from the same political party. The board chooses one of its members as chairman and another as secretary.

Members of the board wishing to interview additional witnesses regarding campaign flights would not need majority support to move forward.

Leake told CJ that he was aware of the provision, but said it had never been used during his time on the board.