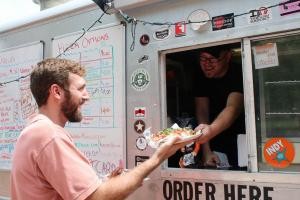 Michael Stenke was newly married, about to have a baby, and unemployed when his friend challenged him to come up with a pizza recipe that tasted like the pizza they grew up eating in Detroit. It was a success. Several months and $19,000 later Stenke was on his way to economic independence with a renovated truck from which he planned to sell gourmet pizza in downtown Raleigh.

But the Raleigh Planning Department said “not so fast.” Food trucks weren’t allowed in downtown Raleigh.

Stenke has spent the last year working with and sometimes fighting against the Raleigh City Council to get that changed. The council assures the public it’s working on an ordinance that would allow food trucks, but the ordinance keeps getting sent back to committee for revision, and with each revision, the potential “allowance” becomes more and more restrictive.

At a July 19 council meeting, objections from restaurant owners and neighborhood groups over the proximity of food trucks to their properties caused the council to send the proposed ordinance back to the Law and Public Safety Committee for further revision.

At its meeting Aug. 30, the committee was unable to agree on the latest and most restrictive version of the ordinance yet.

The ordinance previously made allowances for food trucks on privately owned, commercially zoned parking lots, with the owner’s permission, as long as they were 100 feet from any neighboring restaurants.

• No food truck “rodeos.” No more than three food trucks per parking lot, no matter how large the lot.

• No “grandfather” status for food truck locations. If a truck had been permitted to be in a certain space and a restaurant opened within 100 feet of it, the truck would have to move when the permit expired.

• No parking on grass, dirt, or vacant lots. Parking lot owners must “mark” a designated parking space for food trucks, which must be separate from the parking spaces required for the property’s primary use.

• No food trucks after 1 a.m. Previously, food trucks could operate until 3 a.m., which is the curfew for hot dog stands.

Committee and council member John Odom still was not satisfied with the ordinance.

“I am listening to the restaurant owners, there’s no doubt about that,” Odom said. “It’s not that we’re totally stopping food trucks. We’re stopping making it very easy for them.”

Odom mentioned a coffee shop downtown that struggled for a year to get all of its proper permits. He asked if it was fair to set up a system in which food trucks could be permitted in a matter of weeks.

Odom voted against the ordinance, while the other two council members on the committee — Mary-Ann Baldwin and Eugene Weeks — voted for it. The full council may take a vote at its meeting Sept. 6.

When Stenke opened Klausie’s Pizza — named after his son — on Aug. 23, 2010, he had no idea he’d still be fighting city hall a year later.

Prior to getting into the food truck business, he’d been on unemployment on and off for years. He did contract work — technical writing for companies like IBM, Microsoft, and Cisco.

“I would be six months on, two months off … three months on, one month off,” Stenke said.

His last contract ended the day he got married. He was getting ready to leave for his honeymoon when he got a call saying his contract with the North Carolina Board of Elections was done.

“A guy called and said ‘Hey, the state budget is a mess. You’re contract is over,’” Stenke said.

That’s when he started working on pizza recipes. When he finally came up with “the one,” his pregnant wife encouraged him to max out a $10,000 home equity line of credit and a $9,000 credit card. He bought an old $8,500 truck from Tampa, Fla., which broke down on its way to Raleigh. He spent months working on the engine and getting the kitchen up to the health department’s standards.

Then he went to the city for a business license. “As soon as you get your business license, they walk you down to another office — the zoning/planning office,” Stenke said. There, he got a map of all the places he could not operate, which included all of downtown and various other places throughout the city.

Stenke asked to see the law prohibiting him from operating in those places. At first, he was given a handbook on pushcart vendors, which prohibited motorized pushcarts. Stenke said his food truck was not a pushcart and “unless you have a food truck rule, I’m operating.”

It took the city attorney’s office another month and a half to find a law that said nothing could be sold on private property downtown without a temporary event permit.

“What about on city streets?” Stenke asked. “They finally found a sidewalk rule that said you cannot sell on any sidewalk or any public right of way unless the sale has been vetted by the city council and the planning department.”

“As long as nobody complains, you can break the law,” he said. “But I don’t want to operate in a way in which I’m worried about people complaining. I want to operate lawfully, which is why I went to city council.

“I knew there were places I could hide, but I don’t want to hide,” he added. “I’m building a business. I’m not doing cockfighting or illegal gambling or drug dealing.”

Stenke anticipates Raleigh eventually will give in to the food truck movement. “I’m not going away and they know that.”

Raleigh was ranked as one of the most unfriendly cities to food trucks in the U.S. in a recent report by the Institute for Justice, a nonprofit, libertarian public-interest law firm. The report, Streets of Dreams, argues that “cities can create economic opportunity by knocking down protectionist barriers to street vending.”