Expanding Scope of Nursing Could Save Billions 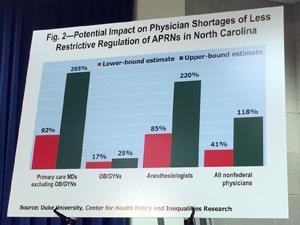 RALEIGH — North Carolina could save as much as $4.3 billion while easing, if not eliminating, a looming doctor shortage by updating statutes that restrict the operations of high-level nurses, a Duke researcher says.

Companion bills have been introduced in the House and Senate ending some longstanding restrictions that require advanced practice registered nurses — nurse practitioners, certified registered nurse anesthetists, certified nurse midwives, and clinical nurse specialists — to work with a supervising physician before they can provide a host of medical services and treatments. The legislation would let APRNs operate more independently.

A report by Duke University research scholar Chris Conover and doctoral student Robert Richards notes that nurses with those certifications offer patient care in a broad range of settings, including practices in offices and clinics as well as inpatient and outpatient hospital settings.

“Various studies have indicated that expanded use of Advanced Practice Nurses under less restrictive regulation would produce annual health system savings of anywhere from .63 percent to 6.2 percent,” Conover said during a Wednesday news conference.

“In North Carolina, annual [health care] spending, we estimate, was $69 billion in 2012. So these numbers translate into annual savings of anywhere from $443 million to $4.3 billion. That’s a lot of money. That amounts to $44 to $437 per North Carolinian,” Conover said. He expects the savings to be closer to the high end of the range.

Savings largely would be due to advanced practice nurses earning about 40 to 50 percent of what physicians make, and training at lower cost.

Less restrictive regulation of APRNs would result in a net increase of 1,744 full-time equivalent advanced practice nurses, he said. That would reduce the expected shortage of primary care physicians resulting from anticpated Obamacare-related early retirements and flight from the profession “by at least 92 percent,” excluding OB-GYNs.

At least 85 percent of the expected shortage of anesthesiologists, and possibly the entire shortage, could be eliminated by expanded use of certified registered nurse anesthetists, Conover said.

“The state’s outdated regulations include red tape in the form of ‘physician supervision’ business contracts that do not require physicians to actually care for patients or even step foot in the APRN’s practice,” Chris Cowperthwaite, a spokesman for the North Carolina Nurses Association, said the day after the news conference.

“These contracts are often very costly — especially for APRNs who don’t work within hospital systems,” Cowperthwaite said. Senate Bill 695 and House Bill 807 “would bring North Carolina in line with other states that have already modernized health care by letting APRNs practice without these costly and unnecessary requirements.”

He said the bills do not expand the scope of services that advanced practice nurses can provide. But because APRNs must practice under contract with a supervising physician, these nurses might have to stop seeing patients if their supervising physician moves out of state or dissolves the business relationship for any other reason.

The other “substantive change” in the proposed legislation would put all APRN regulation solely under the Board of Nursing. North Carolina is one of only four states that continues to regulate nurse practitioners by its nursing board and its medical board, Cowperthwaite said.

“Repealing the physician supervision requirement for nurse practitioners would be a mistake and a step backward,” Seligson said.

“Nothing in today’s law limits a nurse practitioner’s range of services,” Seligson said. “But if supervision is gone, then limits will be needed to ensure patient safety. That will seriously limit the usefulness of nurse practitioners in our system and force us into a one-size-fits-all approach to nurse practitioner regulation.”

Conover counters that “the quality-of-care literature” shows no difference in terms of clinical metrics such as patient outcomes and mortality. But it does show that patient satisfaction that is higher when care delivered by nurses rather than doctors.

“When you have a monopoly on a system you tend to fight things that make changes to that monopoly,” bill sponsor Sen. Ralph Hise, R-Mitchell, said at Wednesday’s news conference. He said Medical Society opposition is “duplicitous” because doctors “hand over a lot of their work and practice” to advanced practice nurses on a daily basis.

Entrenched interests “want to keep their control … even though they’re creating systems that are failing communities” such as the mountain regions of Western North Carolina that he represents, Hise said.

“We’re looking to remove some of those regulatory burdens with highly trained medical jobs, medical jobs that will serve in our rural communities, but it will also save millions of dollars,” Hise said.

Nurses from rural areas trained at state community colleges represent “the highest rates right now of individuals practicing in rural areas throughout all health care,” Hise said. As many as 80 percent of nurses graduating from North Carolina community colleges practice in state. Conversely, he said, only 18 to 19 percent of doctors trained in North Carolina stay here.

If the legislation passes, “I don’t think at this point that we will have budgetary impacts within the biennium,” Hise said.

“Every day we’re hearing the problems we have with health care in North Carolina. We’ve got a crisis here, and a crisis there. We don’t have access. We don’t have full service. We can’t take care of everybody,” said Rep. Marilyn Avila, R-Wake, sponsor of the House bill.

“And some of those problems unfortunately lay at the feet of legislators because of statutes we have in place that are outdated because of changes in technology, changes in education, in professions across the board,” Avila said. “We’ve put in a lot of restrictions that today don’t really help us.”

The nursing profession is an example where more autonomy is merited, she said.

“You’ve got nurses now with master’s and Ph.D.’s,”Avila said. “I don’t know of a profession right off the bat that has changed so dramatically” in the past 50 years.

“We need to have legislation in place, and processes in place, to take advantage of every bit of that ability for the citizens of North Carolina,” Avila said.

Remote-only learning has hurt students, particularly those with special needs