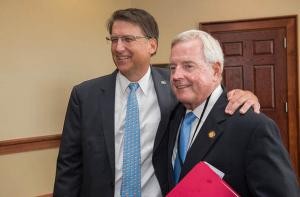 The city of Salisbury’s website boasts that it is “America’s first 10 gig city,” noting that anyone who connects to the municipal Fibrant broadband network has access to Internet connection speeds of up to 10 gigabits per second. But a technology analyst questions the wisdom of city leaders gambling with taxpayer funding over such a risky endeavor.

Salisbury officials heralded the milestone in September at Catawba College when local and state leaders, including Catawba alumnus Gov. Pat McCrory, trumpeted the launch of the latest Fibrant upgrades. While city leaders hope the move will pay off in future economic development and jobs, Berin Szoka, president of Tech Freedom, a Washington, D.C.-based nonpartisan technology think tank, said the city is wasting money paying for a network with far more capacity than the vast majority of users would require.

Szoka said a handful of business clusters might be able to take advantage of those high Internet speeds, but there’s no justification to pay for such costly service citywide.

Moreover, the city has gone into debt to build the network and does not have enough subscribers to cover operating costs. This has led the city to borrow money from its water and sewer fund, which led Moody’s to downgrade Salisbury’s credit rating.

Szoka said the speeds Fibrant offers are impressive, but excessive for the typical consumer’s demands. “Even on Google fiber, the average Netflix stream speed for high definition is still under 4 megabits per second,” Szoka said. “That’s 1-250th of a gigabit, or 1-2,500th of 10 gigabits.”

Szoka said a more reasonable use of public funding might be to provide Internet connections to low-income households. “But instead, [the city is] pouring money into the most exciting, newsworthy thing. It’s the fad of the month,” he said.

Salisbury Mayor Paul Woodson said the city is using the upgraded Fibrant network to target small engineering firms and telemarketers that might locate in Salisbury. The city is trying to find replacements for the textile mills and other manufacturers that once operated there, employing thousands.

Rather than attempting to lure companies that employ several hundred people, the city is looking for high-tech businesses with 25 to 50 employees.

The Fibrant broadband project is financed through a $33 million bond the city borrowed five years ago. It also has borrowed $7 million from its water and sewer reserves for operating expenses.

“We pay back approximately $3 million a year,” Woodson said. He said the annual budget for Fibrant is $6.8 million. “Right now, our goal is to break even,”

“These days, a lot of cities our size have [unemployment rates of] 12 percent, 10 percent,” Woodson said. “We’ve got to do something, because the big companies are going to Cary, Raleigh, Charlotte, Winston, Greensboro. So we’re trying to do something here to make ourselves a little more prominent.”

“I think it’s going to pay off,” Woodson said.

McCrory noted that in the 1970s, when his parents dropped him off at Catawba College as a freshman, they gave him a present.

“The present was an electric typewriter,” McCrory said to chuckles from the audience. It was up-to-date for the time, McCrory said, noting that it had its own “white-out” correction tape included. At the time he also took note of the large computer room on campus, saying that Catawba was at the leading edge of technology.

He used the story to illustrate advances in technology since then, and argued that investments in high-speed Internet infrastructure were necessary to keep North Carolina competitive economically.

“If we are not connected to the rest of the world, to the region, to other states, we won’t be competitive,” McCrory said.