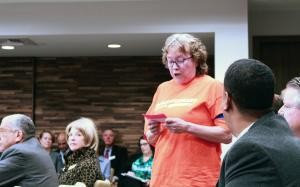 Protesters calling for the termination of UNC President-Elect Margaret Spellings disrupted today’s meeting of the UNC Board of Governors, raising the prospect of disciplinary action for faculty members who — some board members suggested — may have violated North Carolina’s open meetings law.

The meeting, which included a farewell speech from outgoing UNC president Tom Ross, the election of board vice chairman Lou Bissette to the post of chairman, and the appointment of interim president Junius Gonzales — who will serve until March 2016, when Spellings assumes the presidency — saw several UNC professors loudly interrupt the proceedings to demand the immediate termination of Spellings’ appointment. Spellings, former U.S. secretary of education and current president of the George W. Bush Presidential Center in Dallas, did not attend the meeting.

“I think she represents everything that is wrong with the direction that higher education is headed from the profiteering of student debt, to the corporatization of higher education,” protester Michael Behrent, an associate professor of history at Appalachian State University, told Carolina Journal.

Behrent joined several other faculty members, including Altha Cravey, an associate professor of geography at UNC-Chapel Hill, inside the meeting room to shout a list of demands before the board during the roll call. Several dozen protesters held signs and chanted slogans outside the Friday Center, where the meeting occurred.

“[Spellings] sees students as customers,” Cravey said. “After she left the secretary [of education] position, she was involved in the for-profit industry. [There are] many other ways in which she’s pushing to make less regulations on for-profit [efforts] so that she can make more money and benefit herself from these kinds of relationships.”

Following the physical — but peaceful — removal of protesters from the meeting, the board addressed the situation, saying they had no problem with protesters, but those who interrupted public proceedings could not be tolerated.

“I don’t believe that the public likes it when people come in and disrupt our meetings,” said board member Steven Long. “Free speech does not mean that you disrupt the meeting. And I believe that we should take some disciplinary action against faculty members who violate the law and disrupt public meetings.”

Board member Marty Kotis supported Long’s proposal, noting that time spent in board meetings is paid for by students and taxpayers alike, and that every minute of disruption is costly — and less productive than discussion.

“In the interest of this responsibility, it’s important to look at the resources, and look at the time of people in this room, and the things that they do otherwise. Being disrupted and having to wait for chanting to [fade] is wasting money. So I would ask also that we enforce the statute and that we should take some sort of action.”

Bissette said in a press conference following the meeting that he does not think disciplinary action is the best way to deal with faculty members who participated in the protest.

“There ought to be a way that we could get together and address these concerns without having to do it in such a fashion and such a conflict,” Bissette said. “We would love to have faculty show up to meetings as long as they don’t disrupt our proceedings. … They’re so important to our whole system. [We] don’t want to meet in conflict with the faculty. We want to work with them.”

Faculty members say they were not consulted during UNC’s presidential search process, a strong grievance, said Behrent, Cravey, and several other faculty protesters. Their list of demands not only requires the firing of Spellings, but also calls for more collaboration and transparency in UNC governance.

Bissette said that — though he has not been contacted directly by any of the protesters regarding these grievances — the demand for more transparency is very important to the board.

“I can tell you that our board has indicated to me they want to air on the side of more openness,” Bissette told CJ. “And so we intend to do that. We haven’t really sat down and formulated exactly how that will be, but I can tell you that from now on we’re going to sit down and look at things in that matter.”

That effort started with an educational presentation on open meetings law Dec. 10 from staff members at the UNC School of Government, which helped clarify legal terms and use for board members, Bissette added.

“I think it’s a huge starting point,” Behrent said of the board’s strategy. “And I think at least if we could get transparency in this, that would at least be a commitment … which is an important first step. But in addition to transparency we also need meaningful involvement.”