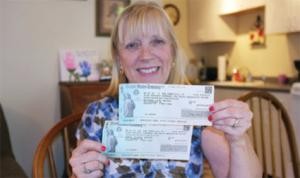 RALEIGH — A Long Island, N.Y., woman has spent nearly two years trying to convince the Internal Revenue Service and the U. S. Postal Service that persons with Hispanic-sounding surnames using her address to obtain tax refunds from the IRS are part of a fraud scheme.

She has not found a government agency that will stop the phony tax refunds from arriving in her mailbox. Instead, federal and state authorities pass the buck. The checks, including some offering payment for Hurricane Sandy “relief” to people who may not exist, keep coming.

Carol Cooke is frustrated. “This is fraud. It is our money and they are giving it to people that don’t deserve it. I have had 16 people using the address where I have paid the mortgage and taxes,” she told Carolina Journal. “Nobody has the right to use this address, especially for fraud. Some of the correspondence was in Spanish only.”

Cooke has lived at 557 Boxwood Drive, Shirley, N.Y., for 37 years. She approached CJ about her situation after reading a Carolina Journal Online story about Stolen Identity Refund Fraud. Federal officials say it’s the “No. 1 tax scam of 2013,” with more than $5.2 billion in losses to U.S. taxpayers reported in tax year 2010.

CJ’s initial report in March highlighted a similar scheme based in Durham. Subsequent stories elaborated on other aspects of SIRF. Cooke said she had contacted other news organizations but none expressed interest. CJ met with her in June at her home.

In October 2011 she began receiving IRS correspondence at her home addressed to other people. Initially she wrote on the envelope, “does not live at this address,” and put the items back in the mailbox. Then she took others to the Shirley Post Office and asked an employee to tell her what she needed to do to stop getting other people’s mail at her house. “I can’t stop people from sending mail to your address,” she said she was told.

The next month, IRS refund checks arrived in her mailbox. There was a $7,113 check to Maribel Rodriguez Rosado, a $7,613 check to Nadia Abad Hernandez, and a $6,073 check to Dairysol Bonilla Ocasio. “I realized that those checks were probably part of a fraud scheme,” she said.

She alerted the IRS to the situation with a phone call. The IRS representative told her to mark the envelope “return to sender.” “I was just not satisfied with that. I wanted it to stop. How can these people receive mail and then checks at my address? It is fraud,” she told CJ.

A spokesman for the IRS told CJ that the agency could not discuss specific cases or situations.

Instead of returning the checks via mail, she decided to notify another government agency, the New York attorney general’s office. She copied the checks and completed a consumer complaint form provided by the AG’s office.

The AG did nothing. “We appreciate your alerting us to this matter. We believe the organization shown below” — the IRS — “may be able to assist you and we are forwarding your correspondence there,” wrote Judy Blumenberg from the Bureau of Consumer Frauds and Protection in the AG’s office.

She completed the form and decided to involve her congressman, Democratic Rep. Tim Bishop, in the correspondence. She also filled out a “Case Information and Privacy Release Form Authorization” provided by Bishop’s office.

“This case has been forwarded to the [IRS] Criminal Investigation Division,” wrote IRS Local Taxpayer Advocate Bernardita Tehrani in a letter Bishop’s office received March 12, 2012. Bishop’s office forwarded a copy to Cooke. A spokesman for Bishop told Cooke she did not qualify for a reward. She said her main concern wasn’t the potential for a financial payday; she reported the tax fraud because it was wrong and needed to stop.

Cooke told CJ that some of her neighbors have seen strangers opening mailboxes and sifting through the contents. Several neighbors have received checks and correspondence from the IRS addressed to persons who did not live there. One woman who requested to remain anonymous told CJ that she and her husband received more 20 pieces of correspondence or checks from the IRS, all of which were addressed to people with Hispanic sounding names. Her husband delivered the material to a regional postmaster.

‘Why did you return it?’

More than a year after the IRS was notified of Cooke’s situation, she has heard nothing from the agency and the checks and correspondence have not stopped.

“Ada Gonzalez Collazo” was one name on IRS correspondence Cooke turned over to Bishop in 2012.

In March, Cooke recovered from her mailbox a letter dated March 6, 2013, addressed to Ada Gonzalez Collazo and referencing tax year 2010.

The letter read: “Dear Taxpayer: We received a returned refund check of $7,756 for the tax period listed above. However, we aren’t sure why you returned it. If you sent an explanation, we are sorry but we have no record of receiving it.

“Therefore, we must ask you to send us your reason for returning the refund check.

Cooke found another letter June 18 from the IRS addressed to Collazo. The notice stated that Collazo had unpaid taxes for 2010 of $5,979.25 and the total needed to be paid by June 27 to avoid additional penalty and interest charges.

“If you don’t pay the amount due or call us to make payment arrangements, we can file a Notice of Federal Tax Lien on your property at any time, if we haven’t already done so,” the letter read.

“If you don’t pay your tax debt, we have the right to seize your property.”

Cooke said that she is concerned that the IRS might encumber her property based on Collazo’s unpaid taxes, even though Collazo doesn’t live at her address and may not be a real person.

Along with those checks were notices of disaster relief assistance from the IRS. “If you have been impacted by the recent disaster in your area and are unable to meet your tax obligations, the IRS may be able to assist with payment and filing extensions, and if qualified, with an expedited tax refund for casualty losses,” stated the notices.

Separate IRS letters addressed to Cardona and Medina dated Oct. 3, 2011, said the 2010 return of each was on hold pending the receipt of additional employer information. Cooke doesn’t know if the IRS issued original checks to Cardona or Medina, or if Cardona or Medina recovered them from her mailbox.

Cooke called the IRS and Postal Service responses to her situation a big disappointment. “An alert should have gone out that this is not right. Those Social Security numbers and those names should be listed in the IRS computer somewhere. Don’t send anything else to these people because they are not real. They are fraudulent,” she said.

Even though the IRS recently has cracked down on Long Island-based fraud, it is unclear whether the crackdown snared those using Cooke’s address.

According to the indictments, the defendants illegally obtained identification information including Social Security numbers for Puerto Rican residents, and used that information to file false returns claiming large refunds. The returns were filed using addresses in Shirley, West Babylon, and other Long Island towns. Then defendants then allegedly bribed Postal Service employees to intercept mailed tax refund checks. The fraudulently obtained checks were cashed at a check cashing service.

“By and large, postal employees are honest people. There can be some bad apples in any group,” said Donna Harris, a spokeswoman for the Postal Inspection Service in New York. “If they do something like this they will be taken care of,” she said. She didn’t know the status of the employees who allegedly accepted the bribes and said it’s the responsibility of the U.S. Postal Service rather than the Postal Inspector’s Office to deal with them.

As for Cooke’s situation, Harris said carriers are expected to deliver mail to the address on the envelope. A mail carrier suspecting fraud should contact the postal inspector in his area.

“For the 2013 tax season, the IRS has put in place a number of additional steps to prevent identity theft and detect refund fraud before it occurs. During 2012, the IRS protected $20 billion of fraudulent refunds, including those related to identity theft, compared with $14 billion in 2011,” he wrote.

“We have new and additional filters in place for the 2013 filing season aimed at preventing and detecting fraudulent returns. This continually updated system enhances our ability to block accounts when we know of or detect a problem. We added screening filters, including ones that target multiple refunds deposited into a single bank account or those sent to a single address.”