Fennebresque Resigns From UNC Board

Chairman, who led presidential search, will leave board immediately 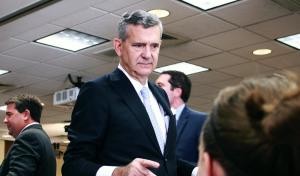 After months of controversy surrounding his tenure as chairman of the UNC Board of Governors, John Fennebresque announced today that he will quit his post.

The board’s vice chairman, Asheville attorney W. Louis “Lou” Bissette Jr., will assume the chairmanship until the board can elect a new leader. The election will follow a required 30-day waiting period. Fennebresque’s board seat will not be filled until the N.C. Senate elects a successor to serve the remainder of his term.

“It has been my honor and privilege to serve on the UNC Board of Governors, and I am delighted we could bring in a nationally proven and accomplished leader to serve as the next president of this great university system,” said Fennebresque in a statement issued by the UNC system.

“With the search completed, I believe now is the time for a fresh start for our university system and its 17 campuses, as well as for this Board of Governors,” Fennebresque added. “So today I am stepping down from the board to make way for and encourage new leadership. Significant challenges lie ahead for the system as it continues to provide the unparalleled education our students deserve.”

Fennebresque, who has been the object of intense scrutiny since the Jan. 9 firing of outgoing UNC President Tom Ross, faced additional opposition from board members on Oct. 15 after giving short notice of an “emergency” Oct. 16 board meeting to interview now president-elect Margaret Spellings.

Spellings, U.S. secretary of education in the George W. Bush Administration, was the only candidate brought to the full board for an interview. That move was one that several board members and legislative leaders saw as an attempt to circumvent recently passed legislation requiring the selection committee to bring forward at least three presidential candidates to the full board for consideration.

The legislation in question, Senate Bill 670, is opposed by Gov. McCrory and has not yet been signed, but if it is not vetoed by Oct. 30 it will become law automatically.

Emails bombarded Fennebresque the evening of Oct. 15, as several board members called for his immediate resignation. Members said in their letters the chairman repeatedly had excluded the board during the making of several crucial decisions — including the firing of Ross.

“The process should have been very different,” board member Marty Kotis wrote in an Oct. 16 email to the board. “Most board members did not learn of the termination or the separation agreement until almost a week later and just before the board meeting — after the deed had been done.”

Kotis also noted in his email that an overhaul of the UNC presidential search process — which he says was designed to centralize power and eliminate greater board involvement — began on the same day that Ross was fired.

The board’s hope is that Fennebresque’s resignation will be the first step in establishing more transparency for future proceedings.

“After you step aside, the full board should be involved in an inclusive search process which can include your chosen candidate as well as many others who deserve consideration in a fair properly-handled process,” said Thom Goolsby, a Wilmington attorney and former state senator, in an Oct. 15 email to the chairman.

Ross, who will officially leave his post as UNC president in March of next year, wished Fennebresque well in an Oct. 26 statement.

“While John Fennebresque and I may have had our differences at times, he truly loves the University of North Carolina and has been a tireless, passionate advocate for it,” Ross said. “He has served the UNC system with great dedication and commitment.”