Fireworks at 9th District hearing as Dowless refuses to testify

The political operative at the heart of the 9th Congressional District scandal won’t tell his story under oath — yet.

McCrae Dowless, the main person of interest in an alleged ballot harvesting ring that helped Republican Rev. Mark Harris defeat Democrat Dan McCready in November, appeared under subpoena at a State Board of Elections evidentiary hearing Monday but refused to testify.

Cynthia Singletary, Dowless’ attorney, said her client would testify only if he were granted immunity from prosecution. When Elections Board Chairman Bob Cordle said the board wasn’t willing to offer that option, Singletary withdrew the offer to testify and Dowless was dismissed.

Harris topped McCready by an unofficial 905-vote margin. Much of the daylong testimony from five witnesses involved Dowless’ role in the skullduggery.

The State Board of Elections has refused to certify the election results over questions about alleged unlawful handling of the ballots. It could order a new election or approve the Nov. 6 outcome, depending on what is learned at the hearing. The U.S. House of Representatives has final say on whether to seat Harris. It could launch an investigation of its own and call for a new election.

The Bladen County resident drew rebukes from attorneys for Harris and McCready.

“Mr. Dowless is obviously implicated in much of the testimony you heard today, and it was disappointing that he did not agree to testify,” said McCready lawyer Marc Elias.

“I think it’s unfortunate considering the way folks were misled, specifically Dr. Harris was misled by what he was doing, that he’s decided to make that choice,” said Harris attorney Alex Dale. He said neither Harris nor Andy Yates, owner of the Red Dome political consulting firm Dowless worked under, were aware of any election misdeeds.

Lisa Britt, whose mother was married to Dowless from 1991-93, gave the most damaging testimony against him. Britt offered insider details and admitted she and Dowless acted improperly if not illegally. She didn’t realize she was breaking the law at first, she testified, and continued doing the work even after she learned it was wrong. 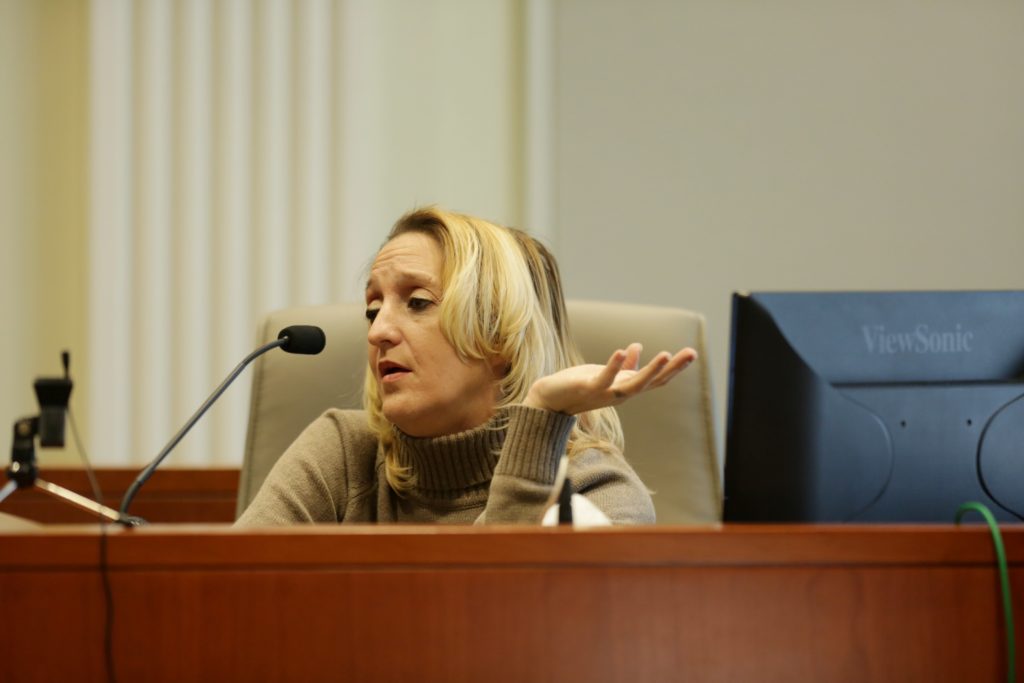 Lisa Britt answers a question by executive director of the Board of Elections Kim Strach during the public evidentiary hearing on the 9th Congressional District investigation Monday morning, Feb. 18, 2019, at the North Carolina State Bar in Raleigh. (News & Observer pool photo)

Britt, who couldn’t vote because of a felony drug sales conviction, said Dowless paid her $150 to $175 in cash for every 50 absentee ballot applications she obtained, along with food and gas money. She and her two children lived with Dowless during the election period.

Under North Carolina law only a voter, immediate family, or legal guardian may help with an absentee ballot. It’s unlawful for third parties to fill out, collect, and submit them.

Britt said she and others working for Dowless turned in all their absentee ballots to him. She said she didn’t know what Dowless did with them, but had no reason to believe he discarded any.

By law absentee ballots are supposed to be witnessed by two people at the time the voter fills out the ballot. Britt said if absentee ballots lacked two witness signatures, she and others would sign them later. She said she would complete some ballots if they didn’t have all the election boxes checked, but never marked a ballot for Harris because that race was always filled in.

She couldn’t say how many absentee ballots she collected, but she signed as a witness on more than 40.

Britt took steps to avoid red flags at the county elections board. She signed her mother’s name as a witness on some ballots to reduce the number she witnessed. Dowless insisted they sign witness forms in the same color ink as the voter, and made sure the same dates were used, even if they were signed on different days. Ballots were returned to the county elections board in small batches from a post office near the voters’ residence rather than in large clumps that might draw attention.

Britt testified Dowless called a meeting after the State Board of Elections began its probe. He told the workers to stick together to avoid legal trouble because investigators had no evidence to use against them.

Britt said Dowless gave her note last Thursday with instructions on what she should say at the evidentiary hearing to protect her and to clear him. The note was shown on an overhead screen in the courtroom.* It read:

Twice during her testimony Britt said Harris was the unwitting victim.

“I think you’ve got one innocent person in this whole thing who had no clue as to what was going on, and he’s the one getting a really bad end of the deal, and that’s Mr. Mark Harris,” Britt said.

Britt implicated the Democratic-linked Bladen Improvement PAC in coordinating absentee ballot registration with Dowless, who was working on Republican campaigns.

She said they tried to avoid crossing over into one another’s turf. She said Lola Wooten and Horace Munn of the Bladen Improvement PAC sometimes met with Dowless to compare and share absentee ballot registrations. Because they tried to separate absentee ballot voters by political party, she said, Dowless had no incentive to throw any ballots away.

Kelly Hendrix also testified she collected absentee ballots and gave them to Dowless. She said she was the only witness on some, and didn’t know who filled out the second required witness form.

During a press briefing after the hearing Elias said it’s clear Dowless is at the center of a large effort to taint the 2018 election, and did it as an agent of Harris, who hired him.

Dale told reporters it was interesting to learn there was a bipartisan ballot harvesting operation, which could be interpreted to mean all the absentee ballots are tainted. Even if they were all thrown out, or just all of Harris’ absentee ballots were disallowed, Harris still would have enough votes to be declared the winner.

The hearing is set to convene again at 9:30 a.m. Tuesday and could last through Wednesday. Cordle has suggested the board will decide immediately after the hearing whether to certify Harris or call for a new election.

*Editor’s note: This story was corrected after initial publication. Lisa Britt testified Dowless gave her the note instructing her about possible testimony. CJ regrets the error.