Panelists discussed distribution of lottery funds and sales tax revenues, along with where funding decisions are made

Politicians and policy analysts clashed Tuesday over school construction costs and who should pay.

The rural-urban skirmish over state tax dollars dominated the hourlong debate into whether reform is needed in distribution of state lottery money and sales taxes, the role state and local bonds should play, and other funding mechanisms to build and repair school facilities.

The event was the first in a series of Hometown Debates sponsored by the North Carolina Institute of Political Leadership, and will be broadcast at 11:30 a.m. and 8:30 p.m. Sunday on Spectrum News’ “In Focus with Loretta Boniti.” Upcoming events will deal with charter schools at Burlington’s Paramount Theater at 7 p.m. Oct. 16, and performance pay for teachers at the Old Post Office Playhouse in Newton also at 7 p.m. Oct. 24.

The panelists agreed state lottery funds dedicated to education should return to 40 percent, where they were before the Great Recession in 2006, when money was shifted to other areas of the budget. Education funding is now about 21 percent of lottery proceeds. 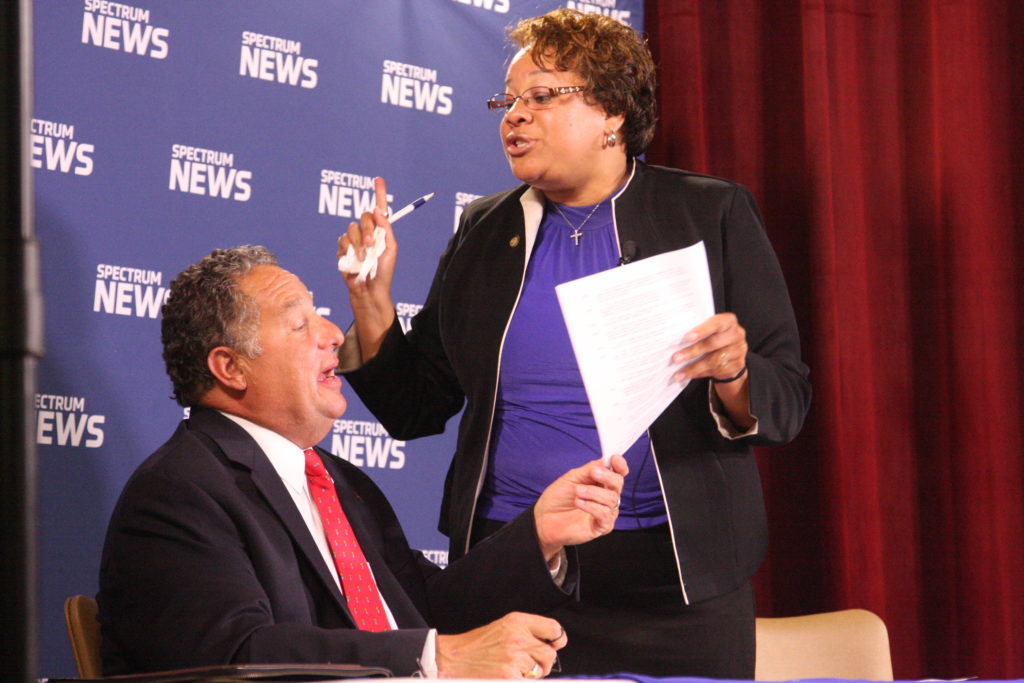 Rural schools are losing population, and many have empty classrooms, in part to satisfy a state push for smaller class sizes. But they have trouble attracting teachers. Urban school districts face the opposite situation: rapid enrollment growth, an abundance of teachers but not enough classrooms or school buildings.

Ellinwood said students “have a right to go to a school that isn’t crumbling,” and the bathrooms are out of service, citing an $8 billion backlog in school capital construction. The state could have “a leveling effect” on local revenue disparities, he said.

Smith-Ingram said without modern facilities and sufficient lab space, students can’t reach their potential. Rural schools in low-income areas have trouble providing them because as enrollment declines, so do state funds which rise or fall alongside daily student attendance.

In five of the past six years voters in Wake, Durham, and Mecklenburg counties passed school construction bonds, she said. Forsyth passed bonds in four of those years.

But voters rejected bonds for Weldon City Schools and Halifax and Northampton counties, she said, because there’s no tax base to repay them.

Ellinwood and Smith-Ingram support the call by the N.C. Association of County Commissioners to place a statewide $2 billion school construction bond on the ballot. Legislation to do that died in the House this year.

Stoops said public school construction should have been included in the $2 billion Connect NC passed in 2016. It contained substantial money for low-priority construction projects at university campuses at the expense of community colleges and K-12 schools with greater needs.

Local school construction should remain a responsibility of county commissioners because they are closest to the situation, and they know what’s best for their parents and students, Stoops said.

But many county boards refuse to fund basic government services. Instead they chase after sports stadium, convention center, and other glitzy economic development projects that never meet fiscal projections and saddle local taxpayers with the costs.

One reason the Halifax schools bond failed is voters didn’t trust county commissioners after they backed a disastrous financial venture with the now-closed Randy Parton Theatre.

Horner said passing a huge school construction bond is unwise, because all of the projects can’t be done at once.

He said by the time all the work is completed, perhaps 10 percent to 15 percent of the bond’s value would be lost to inflation.

Horner said the state took steps this legislative session to help local districts shore up construction funding by approving the Needs-Based Public School Capital Fund. It appropriates $105 million over the next two years for the most distressed counties. That’s on top of $100 million in state appropriations already going to the districts.

Ellinwood said state lottery funds should go to their original purpose — reducing class sizes in early grades, funding construction, and underwriting Pre-K scholarships for needy students. The General Assembly diverted the funding by changing the law to read the allocations would be made “to the extent practical.” Meaning, he said, the money can be spent on just about anything policymakers want.

Stoops wants to limit the use of lottery funding for education. Unless it is put in the state constitution, the General Assembly can — and has — frequently changed the funding distribution. Revenue is unreliable, and projections come from the hope that lots of people will continue playing.

Smith-Ingram said lottery funds were intended to supplement, not supplant, items in the education budget. The state needs safeguards to ensure lottery funds go for capital construction and aren’t diverted to other purposes such as principal pay, as proposed this past session.

“There’s nothing more important than running a casino honorably,” Horner said with deadpan humor. Although he opposed the lottery as a tax on the poor, he said now that it’s in place money should be dedicated only to specific education items.

Horner, Ellinwood, and Smith-Ingram want to redistribute state sales tax money. They said struggling rural counties have a small retail sales base, so residents spend their money in larger counties, which get the tax benefits. Horner said the allocation formula changed recently to distribute more money based on where people live rather than where they shop.