UNC Chapel Hill Chancellor Carol Folt is leaving her job at the end of the month.

On Monday, Jan. 14, Folt announced her plans to leave her position in Chapel Hill at the end of the academic year and to remove Silent Sam’s pedestal from campus.

Then, Tuesday, Jan. 15, after the controversial Confederate statue’s base and placards were stripped from McCorkle Place, the UNC Board of Governors voted in emergency closed session to accept Folt’s resignation, effective Jan. 31. 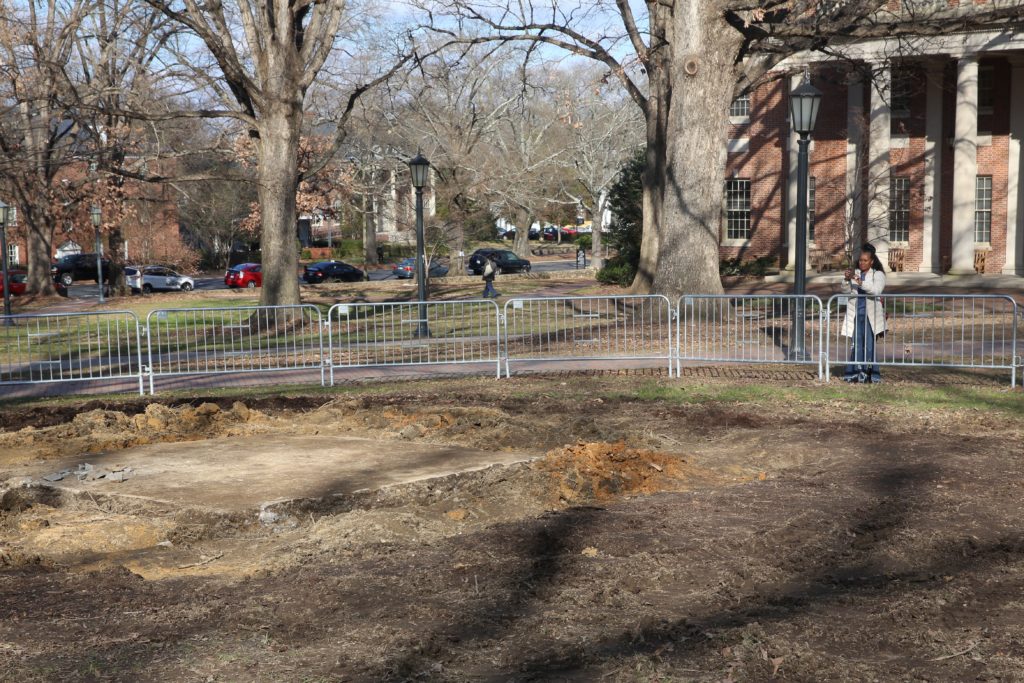 McCorkle Place at UNC Chapel Hill, where the Confederate monument known as Silent Sam stood for more than a century. (CJ photo by Don Carrington)

In a news conference earlier that day, Folt skirted questions about whether the board planned to fire her, but said she hoped to keep her job until May.

The decision to remove Silent Sam’s accoutrements was a matter of campus security, Folt said. The pedestal and placards will remain in storage until the statue’s fate is determined.

Folt said she wasn’t resigning because of Silent Sam, but that the two events coincided, and it made sense to look for what’s “new and next” in her career.

“We are incredibly disappointed at this intentional action. It lacks transparency and it undermines and insults the Board’s goal to operate with class and dignity,” Smith said in a news release Jan. 14.

The decision to move up Folt’s exit wasn’t a punishment, Smith said during a Jan. 15 news conference.

“It is our goal to treat Chancellor Folt with grace and dignity and work with her in this. It was not punitive in any way, shape, form, or fashion,” Smith said of the board’s decision to accept the chancellor’s resignation.

“We just felt it was better to compress the timeline and it worked more towards a healing process, and so that was the decision.”

“While I’m disappointed by the Board of Governors’ timeline, I have truly loved my almost six years at Carolina,” Folt wrote in a statement released after the board’s meeting. “Working with our students, faculty and staff has inspired me every day. It is their passion and dedication, and the generosity of our alumni and community, that drive this great University. I believe that Carolina’s next chancellor will be extremely fortunate, and I will always be proud to be a Tar Heel.”

Roper is authorized to appoint an interim chancellor “at such time as he deems appropriate,” a statement from the UNC System office reads.

UNC must govern well and abide by the law while also prioritizing student safety, said board member Marty Kotis.

“We can’t let those who threaten violence decide how the university is going to be run. But at the same time … people are entrusting their children to us, and therefore we’ve got to be good guardians. … And part of that is, in my opinion, protecting them from a riot that can occur on campus.”

The board would have welcomed conversations about moving Silent Sam’s base, Smith said.

“And look, the fact that we don’t like the governance process doesn’t give us the right to usurp it,” Smith said. “Whether you have the authority to do it or not doesn’t mean that we shouldn’t follow the proper process and procedures that we had laid out.”