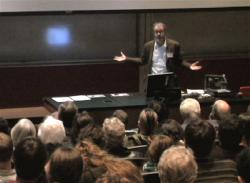 Poor people around the globe need more freedom, not more paternalism, as they strive to climb out of poverty. That’s the assessment of the New York University economist who delivered Monday night’s fifth annual John W. Pope Lecture at N.C. State University.

“We’re at the point in the [foreign] aid system now which is sort of like the point of the falling of the Berlin Wall in the Soviet system,” William Easterly told an overflow crowd of more than 250 people at a campus lecture hall. “The Berlin Wall needs to come down. We need to allow freedom on the other side of the wall for the rest of the world.”

Easterly used his lecture, “The Poor Have a Dream: The History of Freedom and the Escape from Global Poverty,” to contrast the freedom poor people need with the current foreign aid system, based on a “paternalistic, authoritarian approach.” The traditional approach to fighting global poverty involves large increases in foreign aid payments to governments, he said.

“This obsession with aid requirements … it’s really bypassing the main issue, which is: are we giving the poor what they want?” Easterly asked. “Are we helping the poor help themselves? Are they getting what they want to get to give themselves more opportunity to work themselves out of poverty?”

The answer is no, said Easterly, a professor of economics and co-director of NYU’s Development Research Institute. The poor do not get the freedom they need because of an ongoing double standard, he said.

“The sort of forward progress of liberty in every era has been when people did realize we had a double standard and that it was time to end the double standard,” Easterly said. “This is really unacceptable that we have individual freedom and dignity for the rich, but not for the poor.”

Freedom will help the poor by unleashing the entrepreneurial spirit, a spirit common among people Easterly calls “searchers.” “Success stories will come when economic and social entrepreneurs are free to experiment with ways to meet the needs of the poor,” he said. “Let’s call these free, creative individuals ‘searchers’ … as opposed to the authoritarian ‘planners’ that we’ve already seen fail for 50, 60 years.”

The concept of “searchers” represents a familiar concept within the market system, Easterly explained. “I would have just called them entrepreneurs because that’s what they are, but a lot of people have this visceral dislike for anything free market-sounding like ‘entrepreneur,’” he said. “So I tried to soften it a little bit.”

“Now obviously this is not the kind of thing a planner would have figured out from the central planning headquarters in Washington,” Easterly said. “Where was the development expert who told the Egyptians, ‘It’s easy — just send toilets to Italy’? We need private entrepreneurs to figure out — by trial and error — to figure out these miracles and create wealth and lift the poor out of poverty and create jobs. Yet we continue the double standard of rejecting private entrepreneurship, economic and political freedom as the solution to world poverty.”

The alternative hasn’t worked, Easterly said. He cites the $715 billion in government-to-government aid sent to Africa since 1960. “There’s been virtually zero rise in living standards over that time,” he said. “We know some of the examples of very aid-intensive disasters: Somalia, Sierra Leone, Liberia, Zaire/Congo, Sudan, Rwanda. Aid agencies were not held accountable for these failures.”

Easterly expanded on these themes in his book The White Man’s Burden: Why the West’s Efforts to Aid the Rest Have Done So Much Ill and So Little Good, winner of the Manhattan Institute’s 2008 Hayek Prize. Easterly cites the late Austrian economist F.A. Hayek in defending his argument about the importance of freedom.

“He said liberty is essential to leave room for the unforeseeable — those unforeseeable toilets going from Egypt to Italy,” Easterly explained. “We want liberty because we have learned to expect from it the opportunity of realizing many of our aims. It is because every individual knows so little and because we rarely know which of us knows best that we trust the competitive efforts of many free individuals to produce what we shall want when we see it.”

The world’s poor are not content to wait for “authoritarian paternalism” to fix their problems, Easterly said. “They are already rebelling, and they’re already ending poverty on their own,” he said. “Citizens of poor countries have led their own democratic revolutions, and on their own — in a way that’s statistically unrelated to any foreign aid inflow — they have already achieved the greatest mass escape from poverty in human history.”

The John W. Pope Lecture Series is hosted by N.C. State University’s College of Humanities and Social Sciences and College of Management. The series “encourages dialogue on topics of political and economic interest,” according to a university Web site. A John W. Pope Foundation grant supports the series.

Mitch Kokai is an associate editor of Carolina Journal.

I pledge allegiance to the flag