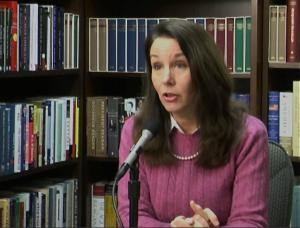 This fall’s legislative elections will help determine how much the government spends, along with which bills can be considered and which ones will win approval in 2011. In addition to this short-term impact, the 2010 elections will have long-term consequences. The next General Assembly will be responsible for what’s known as redistricting. Becki Gray, John Locke Foundation Vice President for Outreach, discussed the topic with Donna Martinez for Carolina Journal Radio. (Click here to find a station near you or to learn about the weekly CJ Radio podcast.)

Martinez: What is redistricting?

Gray: Redistricting is what occurs every 10 years based on the census numbers that are taken. As you know, the census is done every 10 years, every decade. It was last done in 2000. It will be done again in 2010. It is where we take an accounting of how many people live in the country and in North Carolina. Then, based on those census numbers, redistricting is done to determine how many people, so that — going back to the Founders, of one man, one vote — it redistricts … the number of people that are in the different districts. For example, in 2010, they will take the number of all the people in North Carolina. There are 50 N.C. Senate seats. They’ll divide that number by 50, and that’s how many people will reside in each of those 50 Senate seats. Then they will go about drawing those districts so that that number of people lives in each of those districts. Same thing for the N.C. House seats, and same thing for the national congressional seats. So there is a lot riding on it.

Martinez: So the last time this was done was in 2000. There was the U.S. Census. and then, in 2001, the redistricting occurred.

Gray: Right. They get the numbers in, and then they start figuring out how they’re going to redistribute it, if you will.

Martinez: So we’re at the point now where we’re waiting for the census to take place, and then the redistricting will occur next year. So, those people who are elected this fall will be the ones responsible for it.

Gray: Exactly. They will be drawing those maps. In North Carolina — a little interesting thing. The people who draw those maps are the people who will benefit from them. The senators are going to draw the Senate maps, the House members will draw the House map, and then the General Assembly draws the congressional maps. So, a little bit of a conflict of interest, some have argued, in that long-term senators, incumbent senators, as well as House of Representatives members, have an interest in drawing those maps to their benefit. So it becomes a very political issue.

Martinez: So as long as they keep the correct amount of people in the district, they can essentially draw the lines anywhere they want?

Gray: Yes, but there are some federal regulations that come down with Voting Rights [Act] districts. [It has] to do with some civil rights issues. But outside of some of those parameters put forth by federal law, yes, pretty much they can do it wherever they want to. And they do it to benefit themselves, and also they do it to benefit their party. So whoever is in control, whoever holds that crayon, if you will, when they start drawing the maps, has tremendous influence on who will be in control for the next 10 years until the next census is taken.

Martinez: That is so interesting that the very people who would benefit from how the districts are drawn are the people who are sitting there doing it.

Gray: Right. And there’s been some discussion, there have been bills proposed, that would [create] an independent commission — perhaps a committee of a certain number of people that would be appointed by the governor [and] by the Speaker of the House and the President Pro Tem of the Senate. There have been other proposals that have been put forward [about] how to do it differently. But the way it stands now, and I don’t see any change, they’re not about to give up that responsibility.

Martinez: That’s a tough one, to ask people to give up power like that. Other states, however, a few of them do it differently with these commissions, do they not?

Gray: Exactly. Yes, it can be done differently. But in North Carolina, it’s been done like this, and in my opinion, it won’t change. And these bills that have been put forward in the last 10 years to change it — getting ready for this next redistricting — those bills have not gone anywhere. So I think we’re looking at the same battle that we saw in 2001.

Martinez: That’s going to be a major impact on all of us as voters, as well as on the people who are actually in the positions, in the elected positions.

Gray: Exactly, and for the next 10 years.

Martinez: Well, let’s talk about what will happen based on who’s elected this fall. Different issues tend to be favored by the two major political parties. Right now the Democrats are in control.

Gray: [They] have been for quite some time. Yes, we have a long history of Democratic control in the state of North Carolina. The North Carolina Senate, the governor’s mansion, and the House of Representatives have been controlled, except for very brief periods of time, by Democrats for over 100 years.

Martinez: So the political battle, every time around, every two years when these seats are up, is that both major parties — in this case, the Democrats — want to retain control so they can control what bills come up.

Gray: Exactly. And going back to the redistricting, this election coming up in the fall of 2010 is significant not only for the short term, as you’ve mentioned, but also as we were talking, the redistricting. So it’s extremely important. There is a lot at stake.

Martinez: Then you have the North Carolina Republicans, because they’re in the minority right now, of course their electoral push is they want to have more seats so they can have more of an impact on the bills that come up and the bills that don’t.

Martinez: Let’s talk about the types of issues the two major parties like to talk about and don’t like to talk about. Let’s go with the Democrats first, since they’re in control right now. If they retain control, Becki, what types of things are we likely to see come up as potential bills and laws that would affect us?

Gray: Pretty much business as usual, if you will. Again, the Democrats have been in control for years and years and years, and what we’ve seen with them is a pattern of spending and taxing. They tend to like bigger government; they want more government. Just philosophically, they seem to believe government knows better, knows better how to spend your money, they know better how to educate your children, they know better how to implement programs, and that the role of government is bigger. Bigger is better. And, of course, bigger is also more expensive. So we’ve also seen, in order to support these programs, we’ve seen big tax increases over the years.

Martinez: There are some Democrats in our state who are considered conservative Democrats. There have been some pro-business Democrats, have there not?

Gray: Yes, exactly. I’m not sure that pro-business is the same thing as being pro-limited government. We like to think in those terms, but I think there are some really gray areas there. But yes, there are some moderate Democrats, and there has been a balance, if you will, a struggle within the Democratic Party often on some of these issues between the pro-business, more moderate Democrats than the very liberal Democrats who really just want to expand those government programs and make government bigger.

Martinez: If the Republicans win enough seats in the fall to take over the General Assembly, what types of issues would we likely see under their control?

Gray: I think we’ll see more focus on getting a grip on spending. Where the Democrats like to spend a lot of money and then figure out how to pay for it, what I hear from the Republicans — and philosophically what they tend to look at — is to see what the revenue stream looks like and then frame the spending around that, to try to limit the growth of government, limit the role of government, to put more money in rainy-day savings accounts. Just much more fiscally conservative. There has been a lot of talk about a Taxpayer Protection Act, where the spending would be limited by the growth in the population and inflation, rather than just spending, spending, spending. There would be some real limitations put on it. Things like less government, more personal responsibility, more choices left in the individual’s hands. Things like choices with education — I think we’ll see charter schools if the Republicans go ahead. Just those personal, limited-government issues.