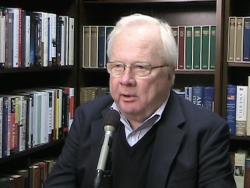 Chief of staff for two North Carolina governors and a U.S. senator, two-time chief of the N.C. Department of Health and Human Resources, the youngest state senator in North Carolina history at the time of his election, 16-year leader of the state’s chamber of commerce. Phil Kirk’s resume includes each of those items, along with the jobs of teacher, radio announcer, and newspaper reporter. Along the way, Kirk has known nine governors. He shared his assessments of those governors earlier this year during a presentation for the John Locke Foundation’s Shaftesbury Society. Kirk discussed the same topic with Mitch Kokai for Carolina Journal Radio. (Click here to find a station near you or to learn about the weekly CJ Radio podcast.)

Kokai: Before we get into these governors that you’ve known, first of all, we know that the governor is the most high-profile job that North Carolinians elect someone to hold. But just how important, from your vantage point, is that governor on how state government operates? Does it make much of a difference?

Kirk: The role of the governor and the powers of the governor have changed greatly since I worked for Gov. Jim Holshouser back in the ’70s. For example, the governor, for many years now, has had the ability to succeed himself, but few people are old enough to remember that Gov. Holshouser could not run for a second term.

We were the sixth-from-the-last state to allow the governor to run for a second term. Virginia is now the only state that does not permit consecutive terms. Second, Gov. Holshouser and Gov. [Jim] Martin — neither had the veto. The governor of North Carolina now has the veto.

I might add that we were the last state — the 50th state — to give the veto. So the role of the governor changed. He or she is also the face of the state and commands attention. The least little comment gets a lot of publicity.

Kokai: You mentioned governors Holshouser and Martin, the only two Republican governors in North Carolina in the 20th century, and you worked as chief of staff for both of them. You’ve known them, and a number of Democratic governors as well, and our current Republican governor. In thinking about them, what was the main message you were hoping to convey in your discussion?

Kirk: One message I convey is sort of one you could take for granted — that all of our governors have been different. And some of the governors, particularly the early ones — I go back to Gov. [Terry] Sanford and [Dan] Moore and so on — I did not know them real well, but I did have some dealings with them. And then with recent governors, and the ones I worked for, Holshouser, Martin, [Jim] Hunt, and [Mike] Easley, and [Bev] Perdue, and now [Pat] McCrory, I have quite a few comments about them, and impressions and pluses and minuses. And I give my opinion, which is not worth a whole lot.

Kokai: Well, it’s certainly worth the opinion of someone who has worked in government for a number of years. As you have worked with these various governors, what have you seen that have been some of the strongest points, either of a particular governor or in general?

Kirk: I think one of Gov. Holshouser’s strongest points was the fact that he had been a member of the legislature. Certainly, I do not think you have to have been a legislator to be governor. I don’t believe that at all. But I could see that Gov. Holshouser, by knowing legislators personally, by also knowing the state budget, that gave him at least two steps forward, even though he was in the minority.

Gov. Martin, for example, knew county government, and he knew the federal government. He had been a county commissioner, and he had been a U.S. congressman. [He] had not served in the legislature.

And then you have Gov. McCrory, who had been mayor of Charlotte for seven terms, 14 years, but had little experience with state government. He’d had some at the national level, particularly in the area of transportation.

But people have different strengths, and Gov. Perdue served in the House and the Senate and [as] lieutenant governor. In my remarks, I say [she] was probably the best-prepared governor on paper that we’ve ever had. But what happened? That’s a long story. But she was unable to run for re-election.

Kokai: You mentioned Perdue. You also have worked in government. Even though you have been a chief of staff for Republican governors, you’ve worked in high positions of power in state government when Democrats have been in charge, such as Jim Hunt. What’s that been like?

Kirk: I’ve always felt — and I guess I’m too old to be naïve — but I felt there’s a place for partisan politics, and it’s during the campaign. And then once the campaigns are over and people have taken office, they need to work together.

That does not mean they have to agree, but they should have honest and civil debate. And I was pleased to chair the State Board of Education for four years under Gov. Hunt and 2 1/2 years under Gov. Easley, both Democrats. So I’ve always prided myself on the ability to work with people that I didn’t necessarily agree with politically. Frankly, that’s missing in today’s environment.

Kokai: Is there a particular trait that one of those Democratic governors had that you think, “You know, this is something that, even though it comes from a Democrat, Republicans should emulate”?

Kirk: I think Gov. Hunt had, and has, an extremely strong work ethic. He also was able to focus on three or four major issues rather than 100. And so that’s why he’s known for Smart Start and for some gains in education and for some economic development initiatives. He didn’t try to be all things to all people.

And so I think focus, integrity with Hunt. And with Martin and Holshouser, I’ve always said that one thing about the people I’ve worked with, I never had any fear that they would embarrass me, unlike some recent administrations.

Kokai: Now, of course, you mentioned Gov. Perdue as being someone who seemed to be very well-prepared on paper but was not able to run for re-election because of things that happened in her term. Did you see some things about her administration that raised red flags?

But also, in an effort to be fair to her, I also would point out that she was governor during very poor economic times — a very weak economy — and when you’re making decisions about budgets to cut, that’s not very popular.

She also was governor during a time when public officials in both parties were not highly thought of. And she followed — while she personally wasn’t involved — she followed a string of at least five Democrats who went to prison for misdeeds. Although that was not her, but it rubbed off on the Democratic Party.

Kokai: Based on all the other governors you’ve seen and what you know about Pat McCrory, how would you say he stacks up in your estimation?

Kirk: I think he got off to a slow start because of his unfamiliarity with state government. He spent his first few months getting his cabinet together, getting his programs organized, and I think he has an outstanding cabinet. [Editor’s note: This interview was recorded before recent cabinet-level changes in the departments of Health and Human Services and Transportation.]

Also the fact that Republicans control the legislature is both a plus and a minus. The Republican leadership in the legislature had been in office two years and had a two-year head start on him. So I think his second year and third year, he’s been much stronger, and I predict that he will continue to be strong in the role. He has a great personality, gets along well with people, even those who don’t like his political views.

Kokai: If there’s a one-sentence statement that you would make to him about something he could do that would lead to a successful governorship, what would it be?

Kirk: Continue communicating, and go outside Raleigh to the main streets in the rural communities and in the urban areas. Just don’t spend too much time in Raleigh. You get sort of a jaded view, I think, of state government and some of the media.

The Right AOC on Point: Cooper has no answers on tanking economy

N.C. ranks last at getting unemployment payments to applicants on time