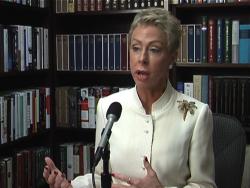 The North Carolina state auditor’s office has not shied away from telling state agencies when they fall short of meeting accepted standards for handling taxpayers’ money. Auditor Beth Wood, an elected Democrat, discussed her office’s priorities during a presentation earlier this year for the John Locke Foundation’s Shaftesbury Society. Wood discussed key ideas from that presentation with Mitch Kokai for Carolina Journal Radio. (Click here to find a station near you or to learn about the weekly CJ Radio podcast.)

Kokai: Very briefly, remind people who aren’t familiar with the state auditor’s office — what do you do?

Kokai: Now that’s a lot of money and a lot of different programs and spending to be auditing. What sorts of things do you focus on in approaching this job?

Wood: When I came into office in 2009, the state had a $5 billion budget shortfall, and so we concentrated on large issues, systemic issues, where we could identify either savings, revenues that were not being collected, or wasteful spending. So we’ve looked at contracting practices in the state of North Carolina because every agency has the ability to contract. We also enter into some huge contracts because of ITS [information technology services] projects.

And we found that our contracting practices are not what they should be. We very simply found contracts that did not have nonperformance clauses for the vendor. So if the vendor didn’t do their job, we usually paid them money to go away. And they didn’t do what they were supposed to do.

We’ve looked at the performance evaluation system in the state of North Carolina. We have about 88,000 employees now, and we find that performance evaluations are not being done fairly and accurately. And when I say fairly — we have about 81 percent of our state employees who are getting “exceeds expectations” and “outstanding.” In the for-profit world, that percentage is about 28 to 32 percent. So we don’t pay the highest salaries, we don’t pay the best salaries, and yet we are that much better than the for-profit world? So that really doesn’t make sense.

We’ve looked at processing permits at DENR [N.C. Department of Environment and Natural Resources]. Again, developers — that’s a huge part of our economy and jobs out there — and we found that permits — we’ve had complaints that permits were being processed very, very slowly. And the information was true. They are processed very slowly. The General Assembly has been misled on how quickly permits were being approved and let. And so these are the kinds of things that we have been telling the General Assembly in our audit reports.

Kokai: So you’ve mentioned some of the key audits that you’ve done so far. Is there still plenty of work to do, plenty of things to look into that your auditors have not had a chance to look at yet?

Wood: Unfortunately, there is. You would think that once we find an issue — especially the huge issues, from contracting to performance evaluations to letting permits — that once we identify the issues, that the agencies would step up and fix the problem. And we are doing now follow-up audits, and we’re going back to see if the agencies have done what they should have done or what the legislators told them to do — and, in fact, a lot of that didn’t happen.

Not only [did we] re-identify, if you will, the problem, but also, the underlying issue for all of this is lack of accountability. I get asked this question over and over again by the General Assembly when I talk about the results of an audit. They’ll say, “Well, did somebody get held accountable for this? Did somebody get fired? Was somebody disciplined?” And the answer to that is no, you usually can’t find anybody that was supposed to be accountable for [these] kinds of things. So as long as the accountability factor doesn’t happen, there will always be work for the state auditor’s office.

Kokai: You’ve been at this for a while now. Do you see any signs that some agencies or some departments are getting a sense that, “Hey, we need to do things a little bit differently”?

Wood: Absolutely. But the key term there is “some.” Not all agencies. It’s a culture; we’ve done things the way we’ve always done them. And even if it’s more efficient, even if it gives a better product, better customer service, people just don’t want to change how they’ve done things for decades. And so the process is slow.

We’re getting help from the General Assembly, in that where they can, they’re enacting [legislation] to make state agencies do better. There are those secretaries who say, “I want to know what’s going on in my agency and how I can do things better.” And so there is some sense of cooperation or wanting to fix these problems, but we still have a long way to go there, too.

Kokai: You are in your second term, which means about the sixth year now in office.

Wood: Going into my sixth year.

Wood: They are still facing many of the key expensive problems [as] when we started. I can give you examples of IT projects that are over budget, or they were supposed to save a certain amount of money. They didn’t save any, or worse than that, the agency is not even tracking to see if they saved the money.

And we keep going into one IT project after another, and nothing seems to change. The project fails. It was over budget. It took too long to do it. It didn’t work when we got the IT project up and running. And then we turn around and make the same mistakes in the next IT project that we take on.

So there is improvement; I don’t want to be, you know, Ms. Negative Nancy. But at the same time, it’s slower than our economy. It’s slower than what the citizens of North Carolina need to happen with the way our economy is working today.

Kokai: What are some of the major things that you and your auditing staff are going to be looking at over the next couple of years, beyond what you’ve been doing so far?

Wood: We will, as I said, continue to go back and do follow-up audits on the contracting practices and the monitoring of contracts. We will continue to look at IT projects and figure out why they failed, who was responsible, and what needs to be done to fix those.

One of the major things that we’re going to look at is there were a number of IT projects that were sold to the General Assembly [as] “we need to upgrade” or “we need a new IT system” for whatever, and “if we do that, then the state will save hundreds of millions of dollars.”

So we’re going back now to look at those IT projects that were let five years ago. What were the savings that were supposed to be recognized? Were those savings tracked? And if they were, are they accurate? So that’s probably one of the bigger ones that we’re going to be [doing].

We’re still continuing to tackle the contracting. You would think a contract that’s written on behalf of the state of North Carolina’s benefit — contracts that should be monitored, contracts that have the right level of expertise to negotiate them — you’d think that after three trips down to the General Assembly that that process would be fixed by now, but it still isn’t. There are still problems with the contracting processes in the state of North Carolina, and we spend about $3 billion a year in personal service contracts alone, not even counting term contracts that we have.