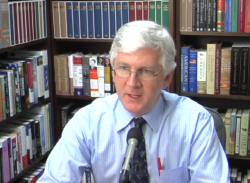 Roy Spencer, principal research scientist at the University of Alabama at Huntsville, recently addressed a John Locke Foundation Headliner luncheon in Raleigh. He also discussed his book, Climate Confusion: How Global Warming Hysteria Leads to Bad Science, Pandering Politicians, and Misguided Policies That Hurt the Poor, with Mitch Kokai for Carolina Journal Radio. (Click here to find a station near you or to learn about the weekly CJ Radio podcast.)

Kokai: Very early on in your book you say that the Western world’s fear of global warming and its effects has amounted to an obsession.

Spencer: When you’ve got people like Al Gore saying there is a global warming Armageddon right around the corner, then some people think that it’s time to save the earth. It’s gotten a little crazy, and I can understand that. I don’t believe that’s what we’re heading for, but there are enough scientists out there that really do think that, that the public thinks, “Oh, this is getting pretty bad.” I understand the hysteria, but it’s still hysteria.

Kokai: One of the reasons that you point out as a possible cause of the hysteria is that there are a couple central beliefs about the earth and how fragile it is, and also the impact of growing wealth around the globe. What are those central beliefs?

Spencer: Let’s start with the idea of the involvement of faith in science. A lot of people think that science is cut and dried. It’s yes and no. You measure something, and if it’s a good measurement then you’re all set. Well, the truth is that even if you have perfect measurements in any scientific discipline — climatology, medicine, whatever — usually there isn’t as much disagreement over the measurements as there is over, what do the measurements mean?

Now people have probably heard that there’s this consensus among scientists and there is this [United Nations] panel, the Intergovernmental Panel on Climate Change, and their official statement is basically they’re 90 percent sure that global warming is due to mankind. And this is where faith comes in. This is not a statement of probability in the sense of statistical probability; it’s a statement of their faith. They think they understand the climate system well enough to be able to say that the warming we’ve experienced is mostly due to mankind. As I point out in the book, we are nowhere near the point of making that decision, partly because nobody has ever studied how much of it could be natural. They just don’t look for that answer.

Kokai: One of the things you also point out that’s very interesting in your book is, we’re not necessarily looking at a situation where you’re saying, “There’s no warming. There’s no potential danger.” You’re saying, “If there is danger, we really don’t know because the science hasn’t developed far enough for us to tell.”

Spencer: Right. People like Al Gore like to call people like me global warming deniers. But amongst global warming skeptics, none of us, at least the ones I know, none of us deny that global warming has occurred. What we deny is that we’ve got any clue how much of it is due to mankind versus nature. What’s interesting … you had asked about the economics of all this. Even if we assume that a global warming disaster is coming in the next, whatever, 50 years, there really isn’t anything we can do about it without new energy technologies. The energy demands of humanity are so large and growing, and there’s just no way to replace fossil fuels at this point on a large scale, on a scale big enough to make any difference. So economically, even if people think that we’re headed for a global warming Armageddon, there isn’t much we can do until we make some technological advancements.

Kokai: In writing this book — which is not designed for your fellow scientists, but more for laymen — what do you hope it will do to the global warming debate?

Spencer: I had several reasons for writing the book. In no particular order, one of the reasons is, when I give lectures about global warming around the country, the most common comment I get from laypeople is, “We hear that mankind is causing this global warming, but couldn’t it all be part of a natural cycle?” That is really a widespread belief out there, and what’s fascinating to me is that I think the public is going to end up being right, and all the climate experts are going to end up being wrong. The book was written to support that gut instinct that the public has, that global warming is part of a natural cycle, so I want to explain in the book how complicated the climate system is and that we really don’t know how much is manmade versus natural. It could well be natural. So that was one motivation, to put a little science behind people’s gut instincts.

I think a bigger motivating factor was the direction I see the policy going, though. The policy changes that are being proposed to attack global warming — say in the U.S. Congress — are going to be so damaging to the economy and especially to the poor that we’re going to be killing people with very real policies that are implemented today or next year or the next year, trying to save an imagined threat, which is what I consider manmade global warming to be, an imaginary threat. We haven’t warmed in seven years, and I wouldn’t be surprised if we’ve stopped warming.

Kokai: One of the things that you hear from folks — even from those who may like the idea that global warming hysteria has gone too far — they say, “Well, if it is a problem, or it potentially could be a problem, shouldn’t we do something?”

Spencer: Yes, that’s a very frequent comment that I hear. They’ll say, “But shouldn’t we do something? We can’t keep dumping pollution into the atmosphere like this, can we?” Well, how can you answer a question like that? Actually, yes, we can keep dumping pollution in the atmosphere, and I don’t even consider it pollution. CO2 is necessary for life on earth, and when you study how CO2 cycles through life, through vegetation and the food chain in the ocean, and through the atmosphere again, you really get the impression that actually life on earth is actually starved for CO2, and that there is actually probably a net benefit in my mind. I think in 10, 20, 30 years, we’re going to realize that more CO2 in the atmosphere is actually more of a good thing than a bad thing.

Kokai: If we take the steps that you mention, the ones that could be incredibly damaging to the poor and to the economy as a whole, will that hurt us in the future if we do need to take some steps to deal with global warming?

Spencer: Excellent question. I’ve made this point in the book. If you really are serious about solving this problem, that is, you really want to cut down on carbon dioxide emissions by, say, at least 50 percent to 75 percent, the only way to do it is through new technologies. Well, which countries in the world are going to come up with these new technologies? It’s the countries that have built the wealth where they can invest in the R&D to generate those new technologies. So in the process of passing these laws that are probably going to get passed next year or the year after, we are going to hurt the economy in such a way that it might actually delay finding those new technologies. We’re hurting the economy, and what’s being planned is going to have no measurable effect on future temperatures.

At the end of Al Gore’s movie he says, “We can solve this global warming problem if we just buy compact fluorescent light bulbs and hybrid cars — if your parents can afford them. Turn off the light when you leave the room, kids, and we can solve it.” And it’s nonsense. I mean, if everyone in the world did that, it’s going to have no measurable impact on future temperatures, no matter what you believe, simply because everything that humanity does requires energy. And most of it has to come from fossil fuels for the time being.

North Carolina running out of room to borrow for road projects