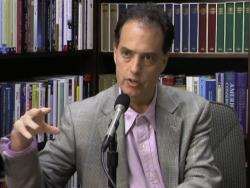 One of the most troubling episodes in North Carolina history involves the state’s eugenics program, which led to the forced sterilization of thousands of people who were deemed unworthy to produce children. Nearly 40 years after the program’s end, the General Assembly is considering compensating those victims. Daren Bakst, John Locke Foundation director of legal and regulatory studies, discussed the issue with Donna Martinez for Carolina Journal Radio. (Click here to find a station near you or to learn about the weekly CJ Radio podcast.)

Martinez: When did North Carolina engage in forced sterilization, and how many people were sterilized?

Bakst: The first sterilization statute was created in 1919. [The state] didn’t really start sterilizing people until about 1929, and it lasted until at least the mid-1970s. And then you asked about the total number. We know about 7,600 individuals were sterilized — virtually all of them forcibly. There might be some that voluntarily consented to that, but pretty much all [were] forced.

Martinez: I think when reasonable people hear you say what you just said, it sounds unbelievable, just abominable. How did North Carolina get involved in forced sterilization?

Bakst: Well, at the start of the 20th century, like other states, North Carolina got involved in the eugenics movement and thought that the state knew what was best and who should reproduce and who shouldn’t. And that was kind of the hip thing, apparently. In 1927, the U.S. Supreme Court said these forced sterilization statutes were OK, in a case called Buck v. Bell. It kind of gave the green light for these statutes, and North Carolina got involved with forcibly sterilizing people that were deemed to be either mentally defective, feeble-minded, or epileptic. And that’s how they got involved.

Martinez: And there was actually an official eugenics board?

Martinez: That sat and made these decisions?

Martinez: So this was completely out in the open and endorsed by the public officials in this state?

Martinez: You mentioned the three categories that people were put into.

Martinez: One of them really catches my attention, and that is the so-called “feeble-minded person.” How was that defined?

Bakst: Well that’s the problem. It wasn’t defined, and it was a catch-all category. About 70 percent of those sterilized were considered feeble-minded. So it was just a way for the Eugenics Board to come up with, “OK, we don’t like this particular individual, maybe she’s promiscuous” — which was a common reason to sterilize a female — “and therefore she’s feeble-minded.” And they basically forcibly sterilized her as a result. So that was the way to justify pretty much any sterilization.

Martinez: Was this in any way racially motivated?

Bakst: No. [It’s] interesting — the data doesn’t show that it was racially motivated. Initially, in fact, [during] the first couple of decades, the data would show that, even adjusting for population, white individuals were kind of disproportionately impacted. Now if you look at the total, over the whole period of time, blacks were disproportionately impacted by the sterilization program. So, there’s some data that would suggest that it did have some racial impact, or disproportional impact, on African-Americans, but not significant. On the flip side, though, as it relates to gender, as it relates to sex — overwhelming impact on females. From 1960 to 1968, about 98 percent of all sterilizations were females.

Martinez: Right now, there is a governor’s task force looking at this and the possibility of compensating these victims. There are some people who are still living who were subjected to this forced sterilization. You have written that you believe compensation of the living victims is appropriate. Why?

Bakst: Well, yes, I do want to stress the living victims. Some of these individuals do have — did have — children before they were sterilized. I’m not suggesting the descendants should be compensated, but just the living victims, which are about 3,000 or so. It’s an estimate, at least by the state. The reason why is that the state invaded the bodies of people, committed really an egregious wrong on these individuals, and the state has never compensated these individuals for that wrong. And there was never any legal recourse for these individuals. At some point the legislature needs to take action to provide the compensation for these people for, I think, maybe one of the most egregious violations of any fundamental right you can think of.

Martinez: At this governor’s task force, there was a meeting, and there was testimony from some of these folks who had been subjected to this. You were there. What was that like?

Bakst: It was emotional. You know, especially when you heard the living — the actual victims themselves, as opposed to the relatives — when the victims were explaining their stories and what happened and how they were tricked into being sterilized or just had no choice, because they were maybe 14 years old or whatever it might have been. It was sad. It really was sad. And a lot of people in the audience were certainly moved by it.

Martinez: You write in your analysis of the state’s program about the greater good concept. At the time, when this was going on, apparently this was deemed to be a social good, and you write about that whole mind-set. Tell us about it.

Bakst: I do want to point out one thing about the North Carolina sterilization program. One thing that’s unique about North Carolina was that most of the sterilizations that occurred — about 77 percent of the sterilizations — occurred after World War II, after we kind of learned the lessons of the Nazi eugenics movement and what happened in Germany. Other states slowed down their sterilization programs. North Carolina is one of the few states that ramped it up. So that made it even worse. But the issue about the greater good is that the whole concept was that it doesn’t make a difference what the impact is on individuals, so long as it benefits the greater society and the greater good. It’s basically ignoring the individual rights because we think it’s more important that we benefit the whole. And I think that’s the big lesson learned.

Martinez: This was progressive thought at the time.

Martinez: Daren, there has been worldwide interest in this story about North Carolina.

Martinez: Literally, worldwide interest. You’ve heard from reporters. What are they asking you?

Martinez: What happens next with this governor’s task force?

Martinez: And so we will await the legislature’s decision on that.