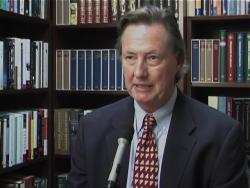 If you’ve spent any time learning about pirates, you’ve likely heard of Blackbeard. Author Kevin Duffus says what you think you know about Blackbeard might be very different from the true story. Duffus wrote the book The Last Days of Black Beard the Pirate. In 2012 he addressed the John Locke Foundation’s Shaftesbury Society on the topic “Blackbeard and his Carolina Pirates: Bloodthirsty Rogues or Hapless Marionettes?” Duffus also discussed Blackbeard with Mitch Kokai for Carolina Journal Radio. (Click here to find a station near you or to learn about the weekly CJ Radio podcast.)

Kokai: Let’s get to the title of the speech: “Bloodthirsty Rogues or Hapless Marionettes?” I understand that has to do with what Blackbeard actually was and the role he actually played. How did that title come about?

Duffus: Well, I set out really to research, as closely as possible, the last six months of Blackbeard’s life. In fact, from the moment that he wrecked his famous flagship, Queen Anne’s Revenge, in Beaufort Inlet, to the day he was killed, just six months later at Ocracoke on November 22, I was curious to see whether historians may have missed something along the way.

There were numerous inconsistencies and other events that purportedly took place during that time that just seemed to be a little impractical or unlikely. So I began to go back to the original sources — the letters and documents that were written and generated and described the appearance of this man who eventually earned the name Blackbeard. And I very soon discovered that there had been numerous errors made by historians over the years.

For example, when Blackbeard was attacked at Ocracoke, the Royal Navy sailors did not approach the island from the ocean. They came from the Pamlico Sound, which startled me, and it also explained why he allowed himself to be captured. So, over the years, I actually wrote the book and published for the first time numerous revisions of the Blackbeard story.

And then in the past four years, I’ve continued to research it even more deeply, looking specifically into the economics and politics of the time. And I’ve come to the conclusion that Blackbeard was merely a pawn in a much more complicated and intriguing game of politics that involved the proprietary system of government and the economy of colonial North Carolina.

Duffus: Based on the historic record, none of that is true. There is only one single authoritative source that describes Blackbeard’s appearance, and it was just a few short words. He was a tall, spare man with a beard that he wore very long. And that’s it.

So all of these conceptions of Blackbeard with the burning fuses and the ribbons tied in his beard or the fact that he murdered people and raped women and had 14 wives — all of that, frankly, is fictional if you rely entirely on the primary sources. It’s only published sources — secondary sources — that have created this image and persona, which I have found to be rather ridiculous.

Kokai: Now back to the more serious stuff: You say that the record shows that perhaps Blackbeard was actually tied up in some of the politics of the day in North Carolina. How so?

Duffus: Well, a good deal of the basis for this theory, unfortunately, is circumstantial. But the fact is Blackbeard sailed to North Carolina in the summer of 1718 and asked for the pardon of His Majesty King George from the colony’s governor, Charles Eden. Blackbeard actually, for over seven months, had plenty of opportunities to receive that pardon from other colonial governors, but he made a very determined effort to reach North Carolina. He had with him when he arrived in Bath, North Carolina, 60 African slaves aboard his ship. And modern pirate historians have often waxed lyrical at the racial diversity of Blackbeard’s crew.

But what I found in doing diligent research is that six months later, most of those Africans were no longer with Blackbeard. And no one has ever asked the question, well, what happened to them? They didn’t vanish into thin air. The fact is they were sold as slaves. And it’s just very suspicious that Blackbeard delivered these 60 slaves to a community that had no slaves, or very few slaves, and no access to slaves, no slave markets.

And so, Blackbeard and his pirates fulfilled a tremendous economic need for the tidewater area of eastern North Carolina. Then when you add additional sources and you learn that Gov. Eden’s political adversary burglarized the colony’s records in an attempt to find incriminating evidence that might help depose the Lords Proprietor’s governor, and maybe even overturn the colony and return it to royal authority — all of these things are all woven together in this fascinating web of intrigue.

Kokai: What do you think, within the record, would indicate why Blackbeard has taken on such a strange and well-known history that may not actually be true? Why do we think of Blackbeard the way we do?

Duffus: We believe his name was actually Edward Thatch, which in fact may not even have been his real name. I believe Edward was probably his first name. But … his nickname, Blackbeard, is one reason that actually made him famous in 1718. And also the manner in which he died — I mean, he had his head cut off at Ocracoke in the heat of battle. The fact that he blockaded the Port of Charleston made him famous in 1718 and 1719 in Colonial America.

Society just sort of grabbed hold of this one particular pirate. He had a cool name: Blackbeard. The fact is, though, no other people in his time actually used a color associated with their name and a surname. And his name was — he used Black. Actually, there was another gentleman of the time whose name was Red MacGregor, which I think is a great example of how naming conventions worked in 1718. He used his actual surname.

But nobody named themselves after a cosmetic feature of their body. When people read my book, they learn that I think Blackbeard could have been named Blackbeard even if he hadn’t had a beard.

Kokai: But if there’s one key fact in the book that you’d like people to know, just based on this interview, that could help them decide to read more in the book, what would it be? What would be a key fact about Blackbeard that they ought to know?

Duffus: I think maybe, to me, one of the most important facts doesn’t even directly concern Blackbeard, but the men who surrounded him in his final days. That final crew of his, which numbered about 25 men, essentially, were the sons of North Carolina property owners. These were young men whose parents lived along the Pamlico River or in the Bath region.

And, according to traditional history, all of those men were executed in Williamsburg and were essentially strangers to North Carolina. But I think the identity of Blackbeard is important, but the identity of his crew members, I think, is one of the most important linchpins in this revised history of the pirate.

Kokai: And if you’d like to learn more, you can read the book. It’s called The Last Days of Black Beard the Pirate. What’s the best way for people to get hold of it?