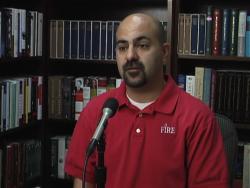 Stroll through a college campus, and you expect to hear debate about a range of good, bad, and even crazy ideas. But too many colleges place limits on debate or restrict the free exchange of ideas to small, out-of-the-way sections of campus. Robert Shibley, senior vice president of the Foundation for Individual Rights in Education, recently discussed higher education free-speech restrictions with Mitch Kokai for Carolina Journal Radio. (Click here to find a station near you or to learn about the weekly CJ Radio podcast.)

Kokai: You recently wrote a column for The Washington Post. People in North Carolina may have seen it in other publications here, and you started off basically saying that the last Sept. 17 was a pretty bad day for the Constitution on our campuses. How so?

Shibley: Well, not just one, but two different students were told that they were not allowed to exercise their constitutional rights, there on Constitution Day, one at Modesto Junior College in California, where a student and Army veteran named Robert Van Tuinen wanted to pass out copies of the Constitution on campus and was told by the campus security that he couldn’t. Then he had a run-in that’s almost impossible to believe — thankfully, it’s on video — with the administrator, who told him that he wouldn’t be able to it today, and he had to sign up ahead of time, and maybe in a few days or maybe next month he could come back and pass out Constitutions on his campus. And that he had to stay inside a tiny free-speech zone that is less than 1 percent of the campus — a little concrete stage in the middle of the quad that he wasn’t supposed to leave.

Kokai: That was just one example, and there was another?

Shibley: That was one example. The other was a student at Citrus College in California, so these are both California cases. Vincenzo Sinapi-Riddle, he goes by Vinnie, wanted to … collect petition signatures protesting NSA domestic surveillance, and was told that he could not do that outside their tiny, free-speech zone at Citrus, which is, to give them credit, slightly more than 1 percent of the college campus. And so, Robert Van Tuinen already has brought the suit and settled it with the help of FIRE, and now Vinnie has brought suit against his college, again with the help of FIRE. And on the same day as we launched three other cases in our effort, the Stand Up For Speech [Litigation Project], that we are trying to finally bring an end to speech codes at public colleges and universities across America.

Kokai: Now, you mentioned these two cases and three other suits, so this is not just happening in California, not just isolated instances, but happening in a lot of different places. What is that sort of general trend that you’re seeing?

Shibley: … The main trend that you can rely on is this campus authoritarianism, and even a kind of totalitarianism, … that every single thing you do on campus has to be regulated in some way. So when we’re talking about students who are passing out, you know, small pamphlets, being told that they can’t do that, they’re not blocking anybody’s traffic, nobody’s complaining about them — or getting petition signatures.

In a couple of the other cases, they were wearing T-shirts that annoyed administrators. You know, it doesn’t matter — it seems like no activity, no matter how small, is too small to escape the notice of campus administrators. And that’s a part of the function of administrative bloat.

The other ongoing problem is the sad fact that campuses do tend to discriminate, for the most part, against conservative and Christian students and libertarian students to a lesser extent, but still significant on campus, simply because of political differences. And while it’s certainly not confined to people who you might perceive as being on the right, they certainly do bear the brunt of it, particularly with pro-life speech or other kinds of controversial — gay marriage, other kinds of controversial issues.

Kokai: Most of us who are listening today don’t spend much time on college campuses these days, but why should this concern everyone?

Shibley: Unfortunately, what we’re seeing is that this attitude, this jaundiced attitude, this crimped attitude toward free speech that is being inculcated on campus, not just through, you know, what professors might be teaching, but really just through the idea that you’re living in this authoritarian sort of Orwellian universe — you get used to these kinds of restrictions on speech. You start to think they’re normal. You start to think they’re good, and you’re being told they’re good in many cases and that good people would want to silence offensive opinions. And those people are leaving campus, and they’re taking that attitude off campus with them, and it’s starting to crimp the idea of free speech in this country.

You know, America is unique in our respect for free speech. But, unfortunately, it’s becoming less so with each passing year. We saw the “disinvitation season” phenomenon this year with Condoleezza Rice, with Ayaan Hirsi Ali, with [International Monetary Fund] head Christine Lagarde — all of whom either backed out or [were] uninvited from giving speeches, simply because the universities didn’t want the controversy or disagreed with them, or they wanted to give in to people who were demanding that they be silenced. And, you know, these are big-name people. If it’s gotten to the point where these really accomplished people, and women in this case, and many others, are being told they can’t speak on campus, who can?

Kokai: It’s very much a concern. All of the examples we’ve been talking about so far have been in other states. Some people might hear this and say, “Too bad for them, but things are fine here in North Carolina.” Are things fine in North Carolina?

Shibley: I think when it comes to the free speech, they are a little bit better than average. I think part of that is because of the historical significance of the UNC-Chapel Hill speaker ban, from decades ago, as sort of … North Carolina got an early lesson on: How do we want to regulate who’s able to speak on campus? So North Carolina had an early lesson that was thankfully decided in favor of free speech there. And so I think there’s a legacy of that.

Also, North Carolina’s universities, thankfully, their speech codes are generally less severe than those in many other states. I think Illinois is one of the worst. North Carolina is doing pretty well. Virginia is among the best when it comes to respecting free speech on campus.

And North Carolina also has — not a free-speech issue, but they have the right to counsel on college campuses. And so, … administrators know now that if you are dragged in front of a campus tribunal for something like this, you’re going to have an attorney with you, or you may have an attorney with you who can make the argument, saying, “Hey, you know what? The First Amendment prohibits what you’re trying to do here.” So it’s an important safeguard, too.

So we’re lucky to live in North Carolina for that reason. There’s a lot of improvement that can take place and that should take place, and that’s something I want to work on as a North Carolinian here. But we are fortunate to live in a state that’s better than average when it comes to that.

Kokai: Our time is running short, but when you look over the recent history of these types of cases, are things about the same as they had been in recent years, or are they getting worse or maybe even getting a little better?

Shibley: The disturbing thing that we’re seeing is an increasing amount of the demands for censorship are coming from students, rather than faculty or administrators. And it’s sad to see students have been miseducated in the K-12 system, and they’re taking that with them to the college system, which is also not educating them properly, to teach them the value of free speech. That said, you know, six years ago, 79 percent of public colleges had laughably unconstitutional speech codes. Now it’s down to 58 percent, so that’s a big improvement, but it should be zero. The law requires that it be zero, so that’s why we’ve launched our lawsuit effort.

The Nikole Hannah-Jones debacle was all manufactured outrage

Lessons from the UNC tenure debacle