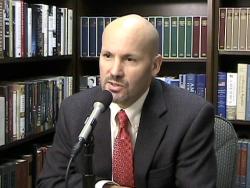 Free enterprise plays a critical role in improving our lives, but a lot of people know very little about why or how. Dr. Peter Frank, dean and associate professor of economics at the Porter B. Byrum School of Business at Wingate University and free enterprise fellow at the Jesse Helms Center, hopes to help boost knowledge about free enterprise through a new curriculum. It’s called “Free Enterprise Now.” Frank discussed it with Mitch Kokai for Carolina Journal Radio. (Click here to find a station near you or to learn about the weekly CJ Radio podcast.)

Kokai: Tell us: What is Free Enterprise Now all about?

Frank: It’s a program that I created along with folks at the Jesse Helms Center, kind of born out of their Free Enterprise Leadership Challenge series that they run as a summer camp program. And we decided to put together the basic foundation of that curriculum in a digital format that’ll be geared more toward middle and high school students on basic foundations of free enterprise. And then: What does it mean to be an entrepreneur, to start a business, to run a business, and the relationship between business and government?

Kokai: Now, those of us who think about studying free enterprise or economics or economic principles often think about college, maybe high school. [It] sounds like you’re going even earlier in the educational process. Why is that?

Frank: Yes, we believe that late middle school and early high school, this is the time that students really get no exposure to what does it mean to understand the free market, the free enterprise system, the system in which we’ve all lived and prospered in, in America. What’s it all about, and why does it function the way it does? And then also, some of the threats to that system.

Those at the Helms Center, you know, they’ve been … living out a Jesse Helms initiative and legacy to try to reach young people with the principles of freedom, liberty, and, in this case, also the relationship to freedom and liberty and the economic system in which we live. And Helms had a desire to reach young people. We think that’s the foundation. That’s really where it needs to begin in order to impact society going forward.

Kokai: Why is it so important, do you think, to get the information to them at a younger age than they might otherwise be exposed to this?

Frank: It seems to me, at least in my experience working with college students and teaching them for the past decade or so, that it’s — those students often come in with a lot of preconceived notions and a lot of ideas that, in some ways, are very entrenched.

And we think, and I believe, that giving them at least a voice to what is the free enterprise system and why we live in this system and why it flourishes is so crucial before they seem to have their ideas ensconced in a way that at least they deem may be unchangeable.

Kokai: Now I imagine that if you were trying to throw some sort of econometrics equations or statistical analysis at middle school kids, that might be a bit daunting. But that’s not what you’re talking about, right?

Frank: No, not at all. We’re really laying out kind of what is the core of what economics and free enterprise [are] all about, based on human behavior. What does it mean to be a human being? What does it mean to have freedom and choices to make decisions? And those are ideas that anyone, I think, at a young age can begin to understand and realize their importance. And in the high school years, this understanding of economics — that it’s not just math, equations, numbers — is something that a lot of students never get exposure to.

Kokai: So what’s the response like among these young folks? Do they get the concepts? Do they make sense to them?

Frank: I think they do. I’ve seen in my experience with the Free Enterprise Leadership Challenge, the camp that the Jesse Helms Center runs, I get to speak to those students in person as opposed to just this digital curriculum. And the response I receive is really overwhelming. I mean, students always want to come up and interact with me after my talks.

And they are very eager to hear more, to learn more. And they repeat back to me a lot of what I’ve tried to communicate to them in a way that makes me believe that they’re really understanding and grasping what we’re trying to communicate.

Kokai: Did the concepts seem unusual or foreign to the students? Or do they hear them and say, “Oh, yeah, that does seem to be the way the world works for me”?

Frank: Yes, I think it’s a mixture. I think some of them, a light bulb goes on and they’re kind of like, “Yeah, that’s exactly the way I see things. You’re articulating something that I’ve observed, but I haven’t been able to articulate myself.”

In others, it does seem new. I think you get the spectrum there. But I’m always impressed with students that realize, “This is how I see the world. Thank you for helping me kind of think through in articulating it.”

Kokai: So if young people get this information in middle school, high school, how’s that going to help them as they move forward either into the working world or as they go into college?

Frank: I think a couple things. One, it may help some of these folks better discern where they want to go to college and what they actually want to study. I mean, that’s one of my real hopes — that students come into college with a better sense of where their role is in society, and where they may focus, whether it is purely in the business world, or maybe it’s in many other contexts — in the social or natural sciences.

I think this curriculum can help them. It can help them with the tools to think through those ideas and to better articulate — maybe even just to themselves — where they want to focus their efforts, their study, and their work as a college student.

Kokai: Now I know some of the people in our audience are involved in homeschooling. Is this the type of thing that might be applicable to a homeschool as well?

Frank: Sure. I mean, it’s exactly who we had in mind for this curriculum: both home and other private- and public-educated students. But this curriculum may be even most suited to homeschooling in the sense that you can tailor what we’ve created and run the program in a very short time period or maybe even in an entire semester, where you use what we have online, what’s available to anyone for free, and really tailor it to your own students’ needs.

Kokai: If parents are thinking about this and saying, “Wow, this sounds like a good idea,” what should they expect that their students would be able to get out of this program in the end?

Frank: Yes, good question. They should be able to get the real basic foundation of what is a free-enterprise system and what does that mean, instead of just maybe what we hear on sound bites on the television. And they’ll also be able to get a real, I think, foundational understanding of what it means to be an entrepreneur, to start a business, what is the role of entrepreneurs in society, and some of the kind of basic foundations of running a business and how a business can thrive.

And they’ll also have available to them resources that will help them move through this curriculum, apart from what they might just watch in videos on the screen.

Kokai: If someone wants to get more information about the Free Enterprise Now curriculum, where will they find it?

Frank: Very simple. Just go to FreeEnterpriseNow.org, and it’s all available to them free.

Saving for the retirement of teachers and state employees